Fresh off the remarkable commercial and critical success of his debut feature, “Ivan's Childhood” (1962), Russian director Andrei Tarkovsky was under pressure to top himself, or at least to prove that he was no one-hit wonder.

Some directors might have played it safe while still building a reputation. Tarkovsky instead chose to shoulder the burden of filming the story of Andrei Rublev, a 15th century Russian icon painter who had only recently (late 1950s) been championed by Soviet authorities as a national hero. Not content with the social and political responsibilities entailed by such a project, the sophomore filmmaker made it clear from the start he had greater ambitions than crafting a mere artist's biopic. Indeed, “Andrei Rublev” (1966), co-scripted by Tarkovsky and future director Andrei Konchalovsky, would not feature a single shot of the title character wielding a paint brush. Instead, Tthe three-hour epic portrays nothing less than a whole culture, situating the artist not as a lone genius, but rather as a conduit for the passions and fears of an entire people. Their story is inextricable from his.

Andrei Rublev (Anatoly Solonitsyn) is only nominally the protagonist of the film whose title bears his name. Rublev wanders in and out of the movie, often disappearing for lengthy stretches of time throughout the seven loosely connected short stories that structure the film. Tarkovsky is interested in virtually everybody in this medieval kingdom, focusing his attention on both peasants and the cruel autocrats who exploit them, on dreamers and laborers and sometimes even on angels.

“Andrei Rublev” is a film of considerable beauty and cruelty. In the opening segment, a man soars majestically above the countryside in a makeshift balloon only to crash hard. In the closing sequence, a young craftsman slogs through the mud and has workers whipped on his way to casting a giant bell that rings deep and true throughout the land.

When he is introduced, Rublev he has already achieved modest fame as an icon painter, but his rise to legendary status will be a circuitous one. The ascetic monk needs to learn more than just the Scriptures to become a true chronicler of the people, and his meandering journey introduces him to many surprising experiences, ranging from a Tatar invasion, snow inside a church, a sustained vow of silence, and even a naked pagan ritual in the woods (always the best kind of ritual).

Shooting in stark black-and-white, Tarkovsky and cinematographer Vadim Yusov take full advantage of the 2.35:1 widescreen frame, often employing extended tracking shots that describe lengthy arcs or even repeat full circles. The staging of the Tatar raid that comprises the film's fifth sequence is a logistical miracle that constantly astonishes, and, in typical fashion, spends time alongside both invaders and their victims. Many descriptions of “Andrei Rublev” employ the adjective “tactile” with good reason. The movie's medieval Russia is built out of mud and blood and stone and straw, creating a concrete sense of time and place that embodies Tarkovsky's desire to make this “a film of the earth.”

After a long, sometimes exhausting journey, Tarkovsky ends his film with an eruption of color and passion. The camera pushes in tight for our first extended close-up look at Rublev's icons as they exist today, now faded and flaking but still captivating and, yes, as tactile today as the 15th century world viewers have lived in for the past three hours. It's a transcendent final note of Bressonian potency, one of the most extraordinary moments in the oeuvre of one of cinema's most extraordinary filmmakers. 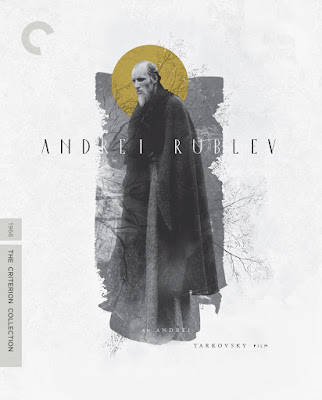 Video:
The film is presented in its original 2.35:1 aspect ratio. The Criterion booklet doesn't provide much information about the source for this transfer, describing it only as “a new digital transfer … created in high-definition resolution … (with) additional restoration... performed by the Criterion Collection.”

Disc One includes the 183-minute version and has clearly benefited from a good deal of restoration. Image resolution is sharp throughout as is the black-and-white contrast, all while preserving a rich grainy look that enhances that “tactile” feel of the movie. If you've seen this on Criterion's old 1999 DVD release (this release also use Spine Number 34), it's a massive upgrade. Disc Two has the 206-minute version and it hasn't had nearly as much restoration (if any), showing plenty of minor speckling and other damage. It's still fine, but could use a thorough restoration of its own.

Audio:
The linear PCM Mono audio track on “Andrei Rublev” (the 183-minute cut) is clean and efficient with no evident distortion or dropoff. “Andrei Rublev” had optional subtitles which support the Russian audio. “The Passion of Andrei Rublev,” the 206-minute cut on Disc Two, has burned-in subtitles.

Extras:
This two-disc Blu-ray set features two cuts of the film, as described in the Video section above. Disc Two includes only the 206-minute cut released as “The Passion of Andrei Rublev.” Disc One contains the 183-minute “Andrei Rublev” and all of the supplemental features. And, boy, has Criterion included plenty of them.

“The Steamroller and The Violin” (1961, 45 min.) is Tarkovsky's first publicly-released film, his student thesis. It tells a sentimental story of a young boy picked on by the other kids for always practicing his violin. He perks up when he meets a construction worker who lets him drive a steamroller and helps him to be a bit more “manly.”

“The Three Andreis” (1966, 19 min.) is a short making-of film by Dina Musatova which primarily focuses on Tarkovsky during the editing process of “Andrei Rublev” though we also get some footage of screenwriter Andrei Konchalovsky on set.

“On The Set of 'Andrei Rublev'” (5 min.) consists of snippets of silent footage of Tarkovsky at work.

The disc also includes an interview with film scholar Robert Bird (2018, 27 min.) He provides more information about the film's production as well as a closer analysis of some of the film's elusive supportive characters, along with a discussion of the film's delayed release in multiple countries.

We also get an older (1998) selected-scene commentary by scholar Vlada Petric, and the U.S. Rerelease Trailer (1 min.) from Janus.

The slim fold-out booklet includes an essay by film critic J. Hoberman and some 1962 remarks by Andrei Tarkovsky, translated by Robert Bird.

Final Thoughts:
If “Andrei Rublev” is a biopic, it's a biography of an entire culture. Few films have created such a palpable sense of time and place, one that feels every bit as modern as it does medieval. Criterion has provided a strong high-def transfer along with an impressive array of supplemental features, along with two separate cuts of one of Andrei Tarkovsky's masterpieces.
Posted by Christopher Long at 8:50 PM No comments: