TOWN BLOODY HALL (Hegedus and Pennebaker, 1979)
Criterion Collection, Blu-ray, Release Date Aug 18,2020
Review by Christopher S. Long
In the documentary “Town Bloody Hall” (1979), Norman Mailer accuses virtually everyone of misunderstanding what he wrote. A lesser writer might have considered this an opportunity to reflect on the possible shortcomings of his craft, but for an author who styles himself as a heavyweight prizefighter, it's an excuse to come out swinging at the puny pretenders who dare to challenge the champ. Mailer doesn't really land any haymakers, but he certainly stirs his share of shit.
Mailer had just stirred an Everest of shit with his essay “The Prisoner of Sex” (published in the March 1971 issue of “Harper's”), a retaliatory strike against feminist author Kate Millett, who had recently criticized him. While (big surprise) accusing Millett of misunderstanding him, he mischaracterized and derided much of the women's liberation movement, igniting a firestorm which branded him, for some, as the nation's male-chauvinist-in-chief, and therefore an inviting target.
The still white-hot controversy generated a April 30, 1971 panel discussion/fundraiser at The Theater of Ideas in Manhattan's Town Hall, ostensibly pitting Mailer against four feminist thinkers, though framing the event and labeling the participants in that manner grossly oversimplifies. Documentarian D.A. Pennebaker and his crew were on hand to film the evening, though the footage would be shelved for several years until editor Chris Hegedus (also credited as co-director) cut it into an actual film that was finally released in 1979.
The documentary begins with the crowds both outside and inside the venue, and the first distinct impression of the evening is the total lack of diversity. This event appears to be exclusive to white attendees, both on stage and off. One heckler, seen a few times, reminds participants that the admission fee precludes the poor from participating in this “open” discussion.
Mailer's bluster threatens to overshadow the circus-like atmosphere, but the four women who speak on stage aren't intimidated by his preening machismo. They also each bring their own perspectives to the program, making it clear that women's liberation circa 1971 is a series of movements, not a monolith. Jacqueline Ceballos, president of the New York chapter of NOW, admits she represents the “square” feminist organization, while the esteemed literary critic Diana Trilling expresses skepticism about what she considers to be the more radical feminist wing, especially those who deny the role biology plays in gender politics, aligning her at least to a modest degree with Mailer.
Germaine Greer, whose landmark “The Female Eunuch” was published the year before, represents that more radical wing, though she asserts that she speaks for nobody but herself. She postulates that the hallowed masculine artist is a figure granted far too much power in modern culture, much to Mailer's amusement. Jill Johnston, then well-known as a dance and cultural writer for “Village Voice” and soon after as the author of “Lesbian Nation” (1973), takes over the stage by all but ignoring both the format and Mailer. She performs a raucous and hilarious poem/speech that culminates in a pantomimed make-out session with two other women. Understanding the virtue of ending on a high note, she then promptly exits stage right, never to return.
The other panelists remain for a contentious discussion which Mailer largely dominates, frequently whining to the audience that he just wants the chance to say something when he has, in fact, been doing all the talking. Greer seems to be the only one really interested in dueling with him aside from audience members, including a few elites selected to ask questions or shoot barbs at Mailer, including Susan Sontag, Elizabeth Hardwick, and Betty Friedan, among others.
Stylish and poised, Greer (much-criticized today for her transphobic comments from several years ago) emerges as the fearless heroine of the evening, at least after Johnston's triumphant exit, while Mailer, at least in my eyes, plays the buffoon. Did Hegedus edit the footage to emphasize Mailer's boorishness? This Criterion disc includes a Mailer appearance on “The Dick Cavett Show” (see below) which raises the possibility that Hegedus may have actually done her best to make the pugilistic author appear reasonable and charming. Mailer calling a woman in the audience “cunty” can almost be dismissed as yet another tedious provocation. But his rambling discursion about how women who take “advantage” of a man who they know won't strike them are actually committing violence against the man would ring as obscene from any speaker, let alone from a man who had stabbed his wife.
Viewers aren't likely to learn much about second-wave feminism from “Town Bloody Hall,” but it's surprisingly entertaining and sometimes outrageous. It also provides a window to a moment in American culture when public intellectuals did something other than whine about cancel culture on social media. 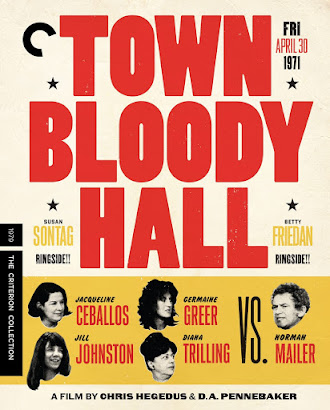 Video:
The film is presented in its original 1.33:1 aspect ratio. The event was shot on 16 mm, and Pennebaker's crew didn't have official permission to film the event. So the footage looks grainy, isn't always well-lit, and features plenty of shaky framing and swish pans. This is a new digital transfer “created in 4K resolution” but it's only going to look so sharp. However, this 1080p more than does justice to the source.

Audio:
The LPCM Mono audio mix is fairly crisp, though sound quality varies at time considering the venue and filming conditions – audience members who shout out weren't miked up, after all. Optional English subtitles support the dialogue, and I found it helpful to turn them on the whole time.
Extras:
Criterion has included a variety of supplemental features for this Blu-ray release.
The film is accompanied by a commentary track featuring Germaine Greer and co-director/editor Chris Hegedus. This was recorded in 2004.
The disc also offers a new interview (2020, 25 min) with Hegedus, discussing her early career and influences (Maya Deren among them) as well as her involvement with “Town Bloody Hall.” As mentioned above, Pennebaker shelved the footage for years. Hegedus, an admirer of some of the women featured on the panel, was excited to have the chance to shape the material into a film. The movie premiered at the Whitney in 1979, but received limited play elsewhere, on college campuses and on PBS in NYC.
“Reunion” (22 min.) shows footage from a 2004 event in which several of the panelists (Mailer not among them) got back together for a screening and discussion of the film at the National Arts Club in NYC.
We also get a 2001 interview (12 min.) in which Greer discusses her impressions of Mailer leading into the panel discussion. She admired him greatly as a writer but had problems with the format of the event since the women were generally expected to march to Mailer's tune. Perhaps surprisingly, she talks about her desire to impress him at the time.
Finally, Criterion has included a full episode (67 min.) of “The Dick Cavett Show” that aired on Dec 15, 1971. Author Gore Vidal and journalist Janet Flanner were guests along with Mailer. Cavett brings out each guest in turn, with Mailer heading on stage last, about a half hour into the episode. Cavett's discussions with Vidal and Flanner were quite controlled, but once Mailer, possibly drunk, shows up it turns into a circus even more overwrought than the town hall event in the main film. Mailer arrives in a rage over some perceived insult from Vidal and fails to connect with a series of embarrassingly lame one-liners. Some of his insults are so incoherent Cavett asks him directly what he even means, and Mailer has no coherent response. The audience turns on Mailer quickly as well, which only provides him with even more energy as he wonders if they're all idiots because, of course, everyone misunderstands him.
The fold-out insert booklet features an essay by film critic Melissa Anderson.
Final Thoughts:
“Town Bloody Hall” may not be the kind of movie you desperately need to see on Blu-ray with a new high-def transfer. But Criterion has loaded this release with extra features that make it a worthy addition to anyone's home video collection.

Posted by Christopher Long at 7:53 AM No comments: