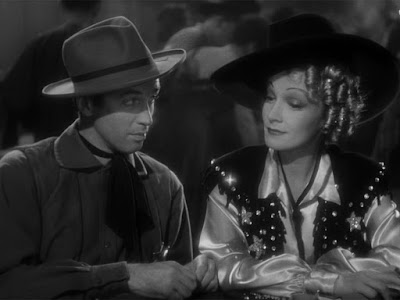 
“Destry Rides Again” (1939) is a Western starring James Stewart and Marlene Dietrich. If you're already thinking “That's all I need to know!” I'm not here to tell you you're wrong. But feel free to read on anyway.

Deputy sheriff Thomas Jefferson Destry Jr. (James Stewart) doesn't ride into the frontier town of Bottleneck until the start of the film's second act, but he quickly establishes his unique brand of machismo. When local saloon owner/bad guy Kent (Brian Donlevy) demands to confiscate the new lawman's guns, the soft-spoken Destry assures him that's not going to happen. As Kent prepares to draw, Destry quenches the smoldering spark of violence by adding that he simply means he doesn't carry any guns at all. He doesn't believe in them.

The saloon crowd jeers, mocking the outsider as a wimp. But Destry's true grit stems from his unshakable faith in his own code of honor. He knows he's right and he cares so little for what the unwashed mob thinks of him that he'll happily brandish a lady's parasol or wield a mop and bucket without feeling the least bit diminished or unmanly.

It's a role so tailor-made for Stewart – the aw-shucks master of rugged humility – that it's hard to imagine anyone else playing it. Yet Universal executives were skeptical that the gangly, drawling actor who'd only recently broken out as a star in Frank Capra's comedy “You Can't Take It With You” (1938) could headline in a virile genre like the Western. Stewart worked out just fine as a cowboy hero, thank you very much ma'am, though it would somehow take another decade before he'd strap on his spurs again in Anthony Mann's magnificent “Winchester '73” (1950).

Producer Joe Pasternak caused studio execs even more sleepless nights when he also pursued German siren Marlene Dietrich for the role of dance-hall singer Frenchy. Not only did it seem absurd to cast the thickly-accented actress in the most quintessentially American milieu, but Dietrich had proven to be box-office poison in recent years, all but abandoning Hollywood to return to Europe.

The unforgettable role of Frenchy represented both a triumphant comeback and a major transformation for Dietrich, her icy glamor melting into an earthy accessibility. Frenchy could belt out a mean tune (“See What The Boys In The Back Room Will Have,” soon to become a staple in Dietrich's repertoire), deftly cheat a man at poker, and claw her way through a prolonged catfight with a vengeful wife (Una Merkel). Frenchy, of course, eventually falls for the deceptive charms of the not-so-meek Destry, a man like no other in town. Stewart and Dietrich also conducted their own affair off-screen.

Universal had already shot a fairly straightforward adaptation of Max Brand's novel “Destry Rides Again” in 1932, with Tom Mix as the righteous hero. For this 1939 version, director George Marshall would shoot from a radically revised script (credited only as “Suggested by” Brand's book) which approached the material with more of a satirical eye. I'm not certain, however, that “Destry” can really best be described (as it usually is) as a comedic Western.

This “Destry” does offer its share of comic-relief characters such as the drunk-turned-sheriff (Charles Winninger) and the henpecked Russian husband (Mischa Auer), but is still composed primarily of standard Western elements. Kent is a cowardly, treacherous villain who all but twirls his mustache; some characters the audience cares for will be gunned down; and the pacifist Destry inevitably turns out to be a crack shot who may have to break his code to enact justice. The unexpected ending (which I won't spoil here) does represent a major departure from formula, but seems too radical to pigeonhole as comedy. Perhaps the film's enduring appeal rests in its ability to function simultaneously both as a revisionist comedy and as an exemplar of the classic genre with a unique and unforgettable hero.

In summary, “Destry Rides Again” is a Western starring James Stewart and Marlene Dietrich. Which is really all you need to know. 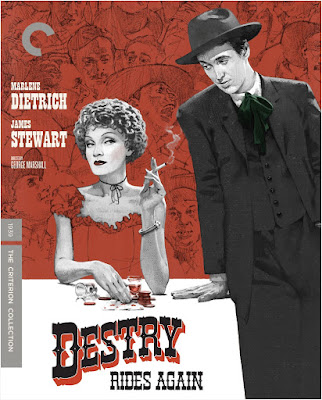 Video:
The film is presented in a slightly odd 1.35:1 aspect ratio, not that you'd notice the difference from a typical 1.33:1 if the Criterion booklet didn't list the specifics. Also from Criterion: “This new 4K digital restoration was undertaken by Universal Pictures in collaboration with The Film Foundation, with special consultation by filmmakers Martin Scorsese and Steven Spielberg. A new digital transfer was created in 4K resolution from a 35 mm nitrate composite fine-grain and a 35 mm safety composite fine-grain.”

The high-def transfer provides sharp black-and-white contrast and a rich grainy look. I can't judge whether it looks as fresh as it did when it debuted in theaters in late December 1939, but this 80+ year-old film sure looks spiffy in this newly-restored 1080p transfer.

Audio:
The LPCM mono audio mix is both clear and appropriately flat. The audio design isn't terribly complex, but the mix does a fine job presenting both the Frederick Hollander composed tunes (lyrics by Frank Loesser) and the film score by Frank Skinner. Optional English SDH subtitles support the English audio.

Extras:
Criterion kicks off the collection of extras with an interview with film critic Imogen Sara Smith (2020, 17 min.) Smith discusses situates the film within the context of Stewart and Dietrich's career. This is one of the very few critic interviews I've ever seen in which the film's director isn't even discussed, perhaps a sign that while George Marshall has always been respected as a competent professional and jack-of-all-trades, he was never identified with a single genre or noted as a visual stylist. I note that I did nothing more than mention his name once in my review above. No insult intended, Mr. Marshall!

The disc also includes an interview with Donald Dewey, author of “James Stewart: A Biography.” Obviously, he provides more analysis of the role the film played in Stewart's career. Stewart was just emerging as a star, but wasn't quite yet a top-line household name. He had just filmed “Mr. Smith Goes To Washington” but it wouldn't be released until production on “Destry” wrapped.

Criterion also offers a 19-minute audio interview with director George Marshall. This was recorded in 1973 at AFI and mostly covers Marshall's reminiscences about his silent film career.

Finally, we get a recording (54 min.) of the “Lux Radio Theatre” broadcast of “Destry Rides Again.” Broadcast on Nov 5, 1945, this truncated version stars Stewart with Joan Blondell as Frenchy.

Final Thoughts:
I repeat: James Stewart and Marlene Dietrich in a Western. With a strong high-def transfer and a solid offering of extra features from Criterion. What more do you need to know?
Posted by Christopher Long at 10:13 AM No comments: