Racing across the dimpled flatbed of a truck as fast as his little formic feet can carry him, Scott Lang (Paul Rudd), marginally better known as Ant-Man, takes one giant leap for antkind, switches his wrist controller from Pym's No. 1 to something much stronger, and lands square on the tarmac of Leipzig/Halle Airport as the 50-foot colossus Giant-Man. Just recently ripping out Iron Man's internal wiring at microscopic size, the petty crook turned costumed crimefighter now towers above the German jumbo jets as he reaches out to pluck the flying War Machine clean out of the air and clamp him down in his monstrous mitt.

Here, the action pauses a beat for a medium close-up on Lang's mask as his eyes widen with mischievous glee and he can't help but chuckle, “Oh ho ho ho!” Because, you see, he can be as tiny as an atom and as big as Godzilla and, as you might guess, that's kinda totally freaking awesome. Lang's giddy reaction captures all the sense of wonder that has motivated millions to “Make Mine Marvel!” over the past half century plus, and a major key to the success of the Marvel Studios franchise is that the characters appreciate the rush every bit as much as the viewers.

No scene demonstrates the philosophical chasm between the Marvel Cinematic Universe (MCU) and the Zack Snyder Universe of Comics (ZSUC) as vividly as this modest highlight from the show-stopping battle at the heart of “Captain America: Civil War.” In the brightly-hued MCU, even characters who have been declared outlaws by an overreaching government and faced with battling their former best friends still stop to have a little fun. In the gray-and-other-gray ZSUC, the nigh-omnipotent Superman is adopted by an abusive stepfather who brainwashes him to be ashamed and afraid of who he is; to really drill the lesson home, he forces his son, who has already lost a whole planet, to stand by idly and watch his father die. In the MCU being a superhero is a gas, in the ZSUC an unspeakable nightmare.

While Snyder dreams of a way to enhance the survivalist paranoia of the ZSUC with a good prison rape scene (may I suggest a Busby Berkeley-style musical number?), the Marvel team fantasizes about both the joys and challenges of being able to soar above the earth, fire energy blasts, control your own density, manipulate probability, lift a hundred times your body weight, and... shoot arrows really well.
The animated Marvel Studios logo flips through a series of comic book pages with KABLAMS aplenty, and the various creators shepherded by MCU head honcho Kevin Feige take the source material very seriously, seriously enough to have a total blast with it.

That doesn't prevent directors Anthony and Joe Russo and screenwriters Christopher Markus and Stephen McFeely from tackling a few weightier issues in this latest Marvel joint. An early battle in Lagos pits Captain America (Chris Evans) and a few of his fellow Avengers against the surprisingly compelling B-list villain Crossbones (Frank Grillo). Naturally, they beat the bad guy but the fight results in the deaths of several innocent bystanders, forcing Earth's Mightiest Heroes to confront the ramifications of their various world-shaking skirmishes. Iron Man/Tony Stark (Robert Downey Jr.) feels guiltiest and eagerly acquiesces to a government plan to place the Avengers directly under the control of the United Nations.

The team fractures almost instantly as members quickly choose sides, with Cap leading the resistance along with Falcon (Anthony Mackie) and totally-not-a-mutant Scarlet Witch (Elizabeth Olsen). And, of course, you can never be sure what Black Widow (Scarlet Johansson, still bringing more life to the character than Widow ever had in print) is really planning. The plot gets even muddier when the Star-Spangled Avenger's best friend from his WW2 days, Winter Soldier (Sebastian Stan), is named as the lead suspect in a terrorist attack in Vienna, and Cap, going full rogue, nominates himself as the only man capable of proving his buddy's innocence.

The Russo brothers and their team have clearly been tasked with packing a trilogy's worth of story and characters and globetrotting destinations into a single movie, and they manage the elephantine task with only a modicum of awkwardness. The machinations of the mysterious Zemo (Daniel Bruhl) almost seem superfluous considering what's already at stake for the Avengers. And aside from the bravura introduction of Black Panther (Chadwick Boseman, fully embracing his shot at one of Marvel's greatest characters) as a major player in the MCU, the story sags a bit in the middle; when Cap and Winter Soldier are on the lam, the film threatens to buckle under its uncharacteristic solemnity. Where's that Marvel fun? The answer: Underoos! 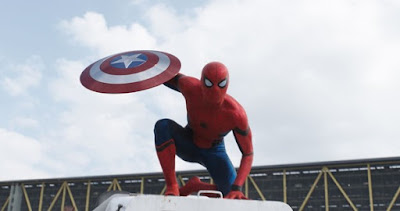 Shoe-horned into the project at the last minute after a bit of corporate horsetrading, the Amazing Spider-Man, a Sony property on loan to Marvel Studios, arrives, like a streak of light, just in time to spike the energy level to new heights. The announced re-re-(re?)-reboot of Spidey to his youngest days courted potential disaster, but the instant teenage Tom Holland speaks, he assumes total ownership of the character in the best-written and best-acted scene in the movie. In just a few minutes, Holland conveys a distinct sense of the Peter Parker who changed the comic book industry in 1963 with all of his brilliance, his naivete, and the desperate insecurity he just barely covered up by blabbering endlessly through fights. Billionaire power broker Tony Stark arrives at Parker's modest Queens apartment as a noble philanthropist offering the impoverished boy genius a chance to upgrade his Spandex game and join the big leagues, but winds up being completely won over by his charm. Ditto for most of the audience.

Which brings us back to the Leipzig airport and the greatest battle scene in any super-hero movie. Sure, the kinetic freewheeling feels dropped in from a different movie than the one with all the somber, dutiful Winter Soldier stuff, but who cares? What could have been a tedious CGI mess with more than a dozen characters bopping around the frame winds up being remarkably well choreographed with individual side battles clearly demarcated, heroes creatively and intelligently deploying their powers (do the writers play Hero Clix?), and constant reminders of the mutual affection the once and future Avengers still share while unleashing traumatic fury on each other, because that's just what friends do in the MCU. And, yeah, the kid steals yet another sequence as Spidey bobs and weaves and motormouths his way among the legends, winning yet another admirer in Captain America even as the first Avenger swiftly dispatches the newest one.

“Captain America: Civil War” probably tackles too much for its own good. Cap sometimes gets lost in his own movie, which is really another Avengers movie, which is really being used to set up both the next Avengers movie and the new Spider-Man and Black Panther movies. The stabs at real-world gravitas are half-convincing, half-irritating. Yet the final product is simply a joy, if for no other reason than that the film gets all of the character right. Every single one of them. Exactly right. That's what happens when your creative team actually flips through all those comic book pages, something nobody appears to have considered over at the ZSUC.
Posted by Christopher Long at 10:49 AM