Let The Sunshine In 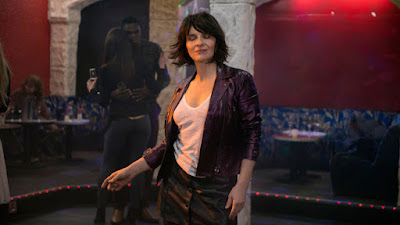 
In a late scene in director Claire Denis' “Let The Sunshine In” (2017), a so-called psychic implores Isabelle (Juliette Binoche) to always remain “open” to the possibility of love. While a bland platitude is the best anyone can expect from a psychic, this statement is the very last piece of advice our protagonist needs.

“Open” is surely the one word that best defines Isabelle's character as revealed through the series of paramours or potential paramours she has encountered during the film's compact running time. A loutish banker, a handsome and feckless young actor, her ex-husband, a sophisticated work colleague, even a stranger in a dance club – Isabelle leaves herself wide open to the excitement, frustration, hope, and betrayal that could face her in each relationship. She's so open that one fears for her safety at times, but Isabelle definitely knows what she's doing.

A divorced painter in her fifties, Isabelle is a veteran of many intimate battles. She has emerged all the stronger from her experience not by encasing herself in a suit of armor to fend off the slings and arrows of outrageous lovers, but by never losing her faith that it's all worth it. He says he'll call tomorrow, but of course he doesn't; he thinks it's romantic to ask you to wait for a month to hear from him, but you find the prospect insulting; you thought your night together was nothing less than wonderful, only to hear him dismiss it as a terrible mistake best forgotten. Isabelle absorbs every bruising disappointment because she's certain the potential reward justifies the struggle, and it's her implacable openness and vulnerability and fragility that makes her so resilient.

Claire Denis and co-screenwriter Christine Angot, very loosely adapting a Roland Barthes book, build the narrative (a series of moments rather than a traditional plot) entirely around Isabelle's resolute search for love or at least for the relationship she wants, which also means relying primarily on Binoche's dynamism to propel the story. Cinematographer Agnes Godard knows just then to cut in – sometimes to leap in – to close-ups of Binoche's face, usually when she's listening to men ramble on, right at the moments when Isabelle realizes her partner's agenda and perspective in no way match hers. Binoche transitions from bliss to disenchantment with such ease, with just the twitch of a few facial muscles, that every moment feels fresh and immediate, perhaps also a residue of Denis opting for a minimum of rehearsal for her cast.

Isabelle's travails are quietly funny too, though I admit I didn't pick up on as much of the humor as I suspect I was supposed to until Gerard Depardieu shows up as the aforementioned psychic, introduced dealing with his own relationship troubles. The film had already offered a scene when the impossibly vain banker (director Xavier Beauvois) barrels through Isabelle's door brandishing a giant bouquet of flowers and the line, “I just got in from Brazil, and I felt like banging you.” So I probably should have noticed sooner. 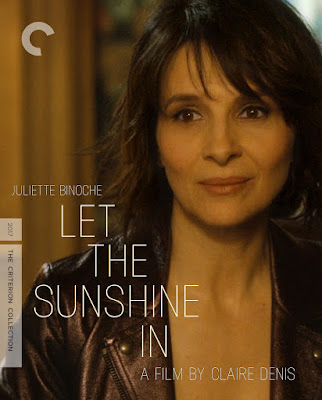 Video:
The film is presented in its original 1.60:1 aspect ratio. Unsurprisingly, this recent film looks magnificent in this high-def transfer. The color palette is rich and naturalistic, detail level is consistently sharp throughout.

Extras:
This disc is relatively slim on extras, but Criterion provides a new interview with Claire Denis (21 min.) and a new interview with Juliette Binoche (17 min.) Denis talks about the development and production of the film, giving ample credit to co-screenwriter Christine Angot. She also emphasizes how humorous she finds the story, a sentiment echoed by Binoche in her interview.

Aside from a Trailer, the only other extra is the Claire Denis short film “Voila l'enchainement” (2014, 31 min.) It stars Alex Descas (who also appears in “Let the Sunshine In”) and Norah Krief as a married couple going through a crisis.

Final Thoughts:
It's hard to believe Denis and Binoche hadn't worked together before. It's about the most natural contemporary director-actor pairing one could imagine. Criterion's Blu-ray disc isn't packed with extras, but the extra short film by Denis is a nice bonus, and the film couldn't look or sound any better.
Posted by Christopher Long at 9:41 PM