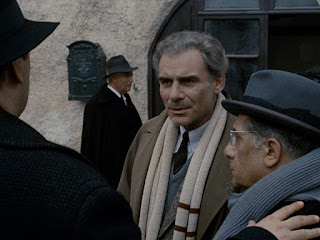 
In 1935, painter, writer, and political activist Carlo Levi was sentenced by Mussolini's Fascist authorities to internal exile (confino) in an impoverished rural town in the Lucania region of southern Italy where local officials monitored his movements and communications on a daily basis. Levi was eventually set free, and in 1945 he published “Christ Stopped At Eboli,” a best-selling memoir about his time among the peasants of the south. In 1979, director Francesco Rosi adapted the book for the screen.

The nearly 20-minute opening sequence eases viewers into this strange new land along with the protagonist. Levi (Gian Maria Volonte) arrives at the train station, picks up a stray dog, and rides a rambling, rickety bus into the town of Gagliano, with the police close at his side. He rests his head against the window and watches wide pastures roll by where shepherds guide their flocks. A feisty old woman on the bus clutches two live chickens. Levi is a long way from his home in Turin, debating politics and aesthetics with his fellow intellectuals.

This long, meticulously detailed trip functions like a decompression chamber, allowing viewers to acclimate gradually along with Levi to this new environment. On his first night in town, a rattled, weary Levi pulls his blankets over his face so he can hide in the cocoon. In the ensuing days he will be shocked to witness boys pelting a priest with rocks and by the desperate poverty as well as the prevalence of malaria among the populace. Soon, however, he forges a connection with his prison-town and grows to love the stoic peasants and to admire their timeless ability to endure hardship.

The peasants embrace him too, especially once he serves as the town doctor, selflessly administering to all, at least when his jailers permit it. Levi's primary goal in publishing his memoir wasn't to recount his plight as a political prisoner, but rather to inform readers about this very different Italy, practically a foreign nation that has been ignored and abandoned by the developed north.

Local officials do nothing to make the peasants feel like they matter. The aforementioned priest (Francois Simon) dismisses his flock as “a town filled with animals, not Christians” but nobody takes the drunken clergyman seriously anyway; they know he was only assigned (sentenced) to their parish as punishment for past transgressions. The fascist-but-friendly mayor (Paolo Bonacelli) fancies himself an intellectual peer of Levi's, but can't fathom why the painter always wants to talk about the locals: “Why go on about the peasants? Forget about them.”

This explains the enigmatic title of both the memoir and film, inspired by an anecdote Levi overheard during his confinement. It refers to the impression some in the south have that the grace of the Church (also often the State in Italy) never spread past the town of Eboli, leaving much of Italy's “boot” out in the cold with no hope of salvation in this world, or perhaps even the next.

Volonte played his share of volatile characters and was also known as a firebrand off-screen, but his Carlo Levi is a tousle-haired, sad-eyed observer, humble and genuinely curious about the people of Gagliano. He learns how a resourceful butcher inflates a dead goat to salvage every body part and tries to hide a smile when his fiery housekeeper Giulia (Irene Pappas) spins the elaborate web of superstitions that dictate her behavior - you can't throw trash out at night because you'll toss it right in the face of the angel who guards the door!

Giulia is one of many strong-willed woman in Gagliano. Many mothers raise their children alone because they have been abandoned by husbands and lovers who have fled to America seeking the opportunities southern Italy doesn't offer. The Great Depression has forced some of those men to return, leading to one of the film's most rousing scenes when a group of inebriated men sing of the glories of New York City (it would have been our capital if we had one!) as well as their homeland, but Rosi cannily defuses the celebration by cutting abruptly from their joyous rendition of “Viva L'Italia” to a fascist rally in the town square. The shadow of Fascism has not stopped at Eboli.

Rosi originally shot his adaptation as a four-part television miniseries, running 220 minutes in the cut included on this disc. Aside from Levi's tentative emergence as the town doctor, there's little central tension driving the narrative. “Christ Stopped At Eboli” is more a film of quiet impressions and almost random encounters that slowly accrete to form an empathetic, kaleidoscopic portrait of a neglected people. The film refrains from passing overt judgments on any of the characters, not even the drunken priest or the indifferent mayor. Carlo Levi, a simple prisoner in Gagliano just like everyone else, merely watches respectfully, helps when he can, and commits every detail to memory so he can share their story. 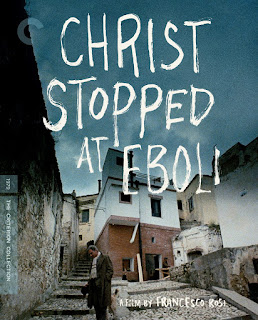 Video:
As mentioned above, Rosi shot “Christ Stopped At Eboli” as a four-part miniseries running about 55 minutes per installment. It was also released in a much-shorter theatrical cut. Criterion has only included the miniseries, which plays as a single film from the menu, though each part has its own opening and end credits.

The film is presented in its original 1.33:1 aspect ratio. From Criterion: “This new digital transfer was created in 2K resolution... from the 35 mm original camera negative.” Colors are naturalistic, heavy on earth tones, and the image resolution is sharp throughout.

In a new interview (2020, 27 min.), translator, interpreter, and writer Michael F. Moore discusses his work on the subtitles for this release, which required dealing with multiple Italian dialects. He also talks a bit about Francesco Rosi, who honed his craft as an assistant to Luchino Visconti on neo-realist films like “La terra trema” (1948).

The disc also includes an excerpt (24 min.) from the July 5, 1978 episode of the French TV series “Cine regards.” This piece, directed by Bouramy Tioulong, combines interviews with Rosi, Volonte, and director Elio Petri with some on-set footage from “Christ Stopped At Eboli.”

“Bad Earth” is a segment (27 min.) of the Aug 9, 1974 episode of the French talk show “Italiques” in which Rosi and Levi discuss a variety of subjects ranging from Levi's exile to the general state of post-war art. Rosi proudly refers to Levi as one of his major artistic influences.

We also get an interview (2014, 13 min.) with Rosi in which the director remembers actor Gian Maria Volonte. Though Volonte was rumored to be difficult to work with at times, Rosi has nothing but glowing words for his frequent star, who died in 1994. According to Rosi, Volonte didn't want to live in a hotel like a typical actor but wanted to spend time with peasant households to immerse himself in the character and the location. This was Rosi's last on-camera interview – the director died in 2015.

A Trailer for the film's re-release by Rialto rounds out the supplements.

Final Thoughts:
The film's considerable length and loosely-structure narrative require patience from the viewer, but that attention will be rewarded by a film that immerses audience in a specific time and place that feels authentically rendered. Rialto restored “Christ Stopped At Eboli” at its full running-length for theatrical release last year, and Criterion has done a splendid job providing a Blu-ray with a strong high-def transfer and a solid array of supplemental features.
Posted by Christopher Long at 8:35 PM