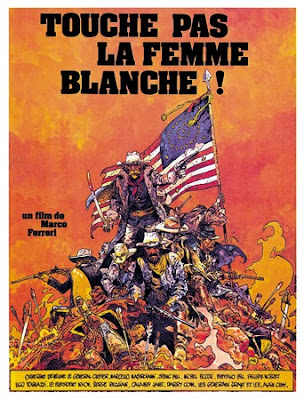 
As a great philosopher said, there’s a fine line between clever and stupid, and Marco Ferreri spent most of his career stumbling along that line like an unrepentant drunk, weaving back and forth until finally falling face first onto one side or the other. With the stark raving mad “Don’t Touch the White Woman!” (1974), Ferreri collapsed into clever and produced one of the strangest un-Westerns ever made.

The film is nominally a re-enactment of Custer’s last stand. Ferreri wasn’t particularly obsessed with historical accuracy and the keen-eyed viewer may spot a few inaccuracies along the way. First, all of the characters speak French. Second, there’s some guy who hangs around the set wearing a University of Denver sweater and eating potato chips. Third, while all of the principals are dressed in period clothing when they go to the train station everyone else is wearing jeans and t-shirts. Also, Richard Nixon is president.

This sounds like a film made on the cheap and it may well have been but it sure as hell attracted an all-star cast: Marcello Mastroianni (as Custer), Catherine Deneuve, Michel Piccoli (as Buffalo Bill), Alain Cuny (as Sitting Bull), Philippe Noiret, and scene-stealing character actor Ugo Tognazzi as Custer’s Native American servant named, of course, Mitch. 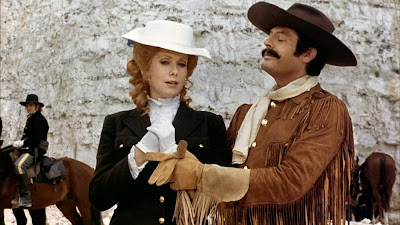 Ferreri shot the film on the site of a demolished mall in Paris. Instead of roaming the open plains, the Indians (led by Sitting Bull) mill about in the ditch that serves as the construction site. It’s basically a big hole with mounds of dirt and rocks all over the place. I think it’s supposed to be the reservation. The soldiers all live in a building at the top of the ditch and the two groups occasionally shout at each other seeing as they’re all of a few hundred feet apart.

Custer spends most of his time blustering, being jealous of Buffalo Bill, and trying to seduce Marie-Hélène. Mitch tries to play both sides of the fence which only results in him being despised by everybody. Sitting Bull eventually gets stoic, man, and prepares his people for the climactic battle.

And what a battle. It is so gloriously unconvincing, so utterly absurd that it achieves a kind of greatness, though precisely what kind scholars have not yet determined. When Custer sweeps onto the battlefield (i.e. goes down into the ditch) he is shocked when ambushed by a group of Indians who were pretty much just hiding behind a dirt mound. The last chunk of the film is basically just a slaughter with white men getting impaled, clubbed and scalped to death, and I’ll be damned if it isn’t a hell of a lot of fun to see them all get it all real good.

“Don’t Touch the White Woman” is a giant cup of “What the fuck?” but it’s absolutely riveting. And pure Marco Ferreri, which is unlike anything else ever. 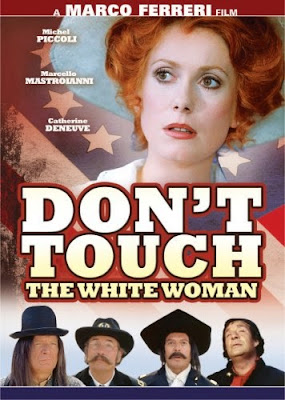 Video:
The film is presented in a 1.66:1 aspect ratio. This is a pretty miserable transfer, almost certainly a PAL dupe. A sickly green hue permeates the film, and the image is muddy and dull. It looks like a 3rd or 4th generation VHS dub. But it's still watchable.


Audio:
The film is presented in Dolby Digital Mono. Forced English subtitles support the French audio. The sound mix is adequate, at least compared to the video.

Extras:
The only extra is a 3-minute excerpt from the documentary “Marco Ferreri: The Man Who Came from the Future.”

Film Value:
Ferreri’s anarcho-anachronistic exercise in historical deconstruction is a feat of inspired insanity. I don’t know if it’s great film-making but it’s definitely… something. And I love it dearly.

Posted by Christopher Long at 10:57 PM