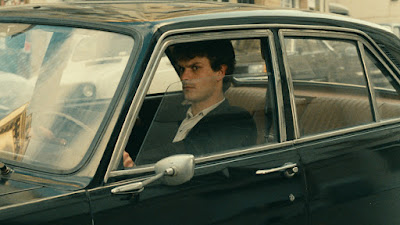 
An old man walks down the street while reading a newspaper. He passes by a parked car in which our protagonist, Yvon (Christian Patey), sits quietly and looks straight ahead. Several police cars speed by, sirens blaring. The old man continues walking until he sees three men, presumably police officers, crouching behind their cars, so still they could be sculptures. The old man hurries away. Across the street, another man (who we can't see clearly) walks out of a bank, holding a woman in front of him. One of the crouching men very deliberately aims his gun.

Cut back to Yvon as he sits in his car still staring blankly. A single gunshot rings out off-screen, but if Yvon hears it, he does not react. The robber retreats cautiously back into the bank - who fired at whom and why doesn’t anyone seem to be panicking? Cut back to Yvon once again as a volley of gunshots rattles off-screen. He reaches deliberately for the ignition and starts the car. Hold on an extended closeup of Yvon’s hands (it's always hands with Bresson) on the steering wheel as more sounds play out off-screen: shouts, police whistles, etc. We finally cut to an exterior shot of Yvon’s vehicle as a police car pulls alongside him. Yvon, his expression still blank, shifts the car into drive and peels out.

It’s the strangest, most subdued bank heist you’ve ever seen on film, and it is also a text book example of the idiosyncratic style of the great French director Robert Bresson. At least three quintessentially Bressonian features are on display here. First, there's Bresson’s oft-discussed approach to acting. He employed non-professional actors, whom he described as “models,” and trained them to perform as automatically and mechanically as possible, often using multiple takes to wear them out: the goal was for the models to act without inflection, often resulting in the stoic, passive “Bresson face.” (For more discussion of Bresson’s use of models, please check out my review of “Au hasard Balthazar”.)

Second, this scene offers an instructional lesson on Bresson’s revolutionary approach to sound. For Bresson, sound and image are often redundant, and if the two work together they do not necessarily reinforce each other but sometimes cancel each other out. If a sound conveys the essential meaning of the scene, there is simply no need to show a similar image as well. Therefore, when we hear the volley of gunshots and the whistles, we do not see the police shooting at the robbers, but rather Yvon’s hands as they rest limply on the steering wheel as if awaiting further instructions from their master. As for what precisely occurs at the bank, we are left to wonder - in Bresson’s view, the ear is more imaginative than the eye, and sound is not merely the bastard child of image.

Third, Bresson’s emphasis on economy and precision (“L’Argent” runs at just 81 minutes) is evident in this scene. Bresson ruthlessly stripped away all extraneous elements from his films, until he was left with only the essential elements required to tell the story. After Yvon speeds away, we see a brief car chase which Bresson conveys by two primary images: Yvon’s feet as they switch from the accelerator to the brake, and a shot of the police cruiser as seen in the side mirror of Yvon’s car. Cut back and forth between these two shots a few times and… there’s your car chase. It is also worth noting that this is not merely economical from an artistic point of view but from a pragmatic perspective as well - Bresson seldom worked with big budgets. 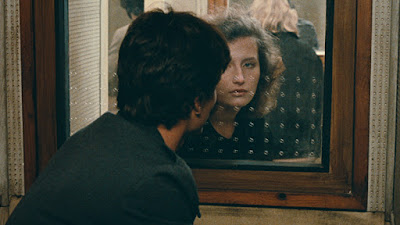 These three elements (among others) defined Bresson’s films for the bulk of his career and combined to produced one of the most distinct, hermetic, and endlessly fascinating bodies of work in all of cinema. If Bresson had not perfected these techniques (how is such a thing possible?), he had finely tuned them by the time he directed “L’Argent” (“Money”) in 1983 at the age of 82, and it was the last film the French master would ever make. Bresson, who died in 1999, intended to continue directing, but was unable to secure financing for his long-planned adaptation of the Book of Genesis, and he unofficially retired by the end of the 1980s. Fortunately, Bresson’s final film is also one of his greatest.

“L’Argent” is loosely based on Tolstoy's short story “The Counterfeit Note” which also translates as “The Forged Note” or “The False Coupon.” The film adaptation, updated to contemporary France, begins with two young men who pass off counterfeit bills to a local photography shop. The store owners discover that the bills are forged, but don’t want to get stuck with the loss so they, in turn, pass them on to Yvon Targe, the young man who delivers heating oil to their store. After Yvon is caught with the counterfeit money, he returns to the store with the police in order to prove his innocence, but the owners pretend not to recognize him. From this point, Yvon’s fate is sealed and his situation degenerates from bad to worse to unspeakable.

“L’Argent” traces the spread of evil (flowing by the same route as capital) from its first flowering to its final violent explosion. As the counterfeit notes change hands, they leave destruction in their wake and nobody escapes fully unscathed. In the opening scene, a young man asks for a handout from his father; in the climactic scene a homicidal Yvon has only one question to ask: “Where’s the money?” 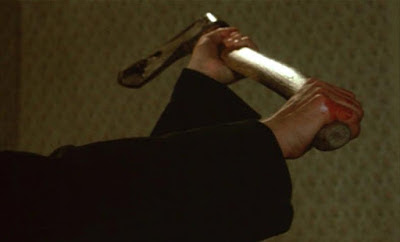 Bresson believed in predestination (or maybe not – it's a thing critics have often written but it's a lot more complex than that) and Yvon is an innocent victim fated to be laid low by circumstances beyond his control. He is not merely falsely imprisoned but is actually transformed by the system; once released from jail, he decides he might as well become the monster everyone thinks he is.

Bresson’s films are often considered to be pessimistic and grim, but “L’Argent” ramps that dark vision up to a new level. In many of Bresson’s films, the characters achieve a kind of grace or even redemption by way of their suffering, but there is little, if any, sense of redemption in “L’Argent,” the ending of which is one of the bleakest notes in cinema. Except maybe in “Au hasard Balthazar.” Here you can choose from two Bresson quotes: one in which he described himself as a “jolly pessimist” and another in which he rejected the dourness ascribed to his vision: “You are confusing pessimism with lucidity.”

Like most of Bresson’s films, “L’Argent” accumulates its remarkable affective power through its puritanical restraint. Yvon remains an opaque figure with a blank expression even as he transforms from an innocent working class man into a remorseless killer. We could easily imagine the Hollywood version of the same story with a classically-trained method actor raving and gibbering and chewing the scenery with dramatic music to underscore the transition, but Bresson does not pursue that route. Nor does he linger on any of the typical gory elements. As he does in the car chase, Bresson simply picks a few objective details and deploys them to convey an entire scene. Bresson’s tendency to elide the main action is so pronounced in “L’Argent” that even an attentive viewer might miss altogether the fact that, in one sequence, Yvon murders two hotel owners. The ending is all the more potent and unnerving because of the sense of clinical detachment cultivated by Bresson; we are all invited to consider the proceedings with the dispassionate eye of a coroner rather than as a sympathetic and involved viewer.

We do not quite know why Yvon does what he does or why he selects his victims. Bresson’s cinema is one of surfaces, not psychology – which is to say it's grown-up cinema. Character is revealed only through behavior, not through exposition or analysis. There are no “character moments” offered as a sop to the audience, and Yvon’s sudden decision to cross the line into violence comes as a shock as we have not been prepared for it as we might expect. Bresson provides the what - the viewer, if he or she simply must, provides the why. 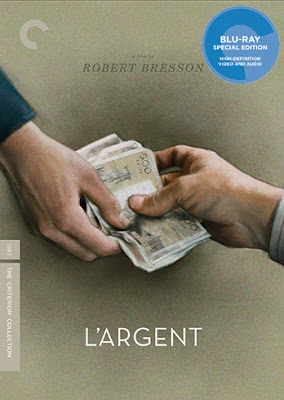 Video:
“L'argent” was released on DVD by New Yorker back in 2005 and as much as I love and miss that dearly departed label, this Criterion 1080p upgrade puts the old transfer to shame, and then some. The difference is considerable that I've decided to post the Criterion release as a separate review instead of just adding sections to my old New Yorker review.

The film is presented in its original 1.66:1 aspect ratio. “This new 2K restoration was undertaken from the 35 mm original camera negative” and the improvement in the high-def image reveals much more detail while also providing warmer, more naturalistic colors. It's hard to imagine the film ever looking any better than this on home release.

Audio:
The linear PCM mono track is crisp and a very welcome upgrade that highlights Bresson's meticulous sound design, from the loud snaps of clothespins to the whining of a dog. Just as Bresson suggested sound could be more important than image, this audio upgrade may be more important than the sharper picture. Optional English subtitles support the French audio.

Extras:
Kent Jones's commentary track on the old New Yorker DVD may be my favorite commentary of all time, and it's a great disappointment Criterion didn't include it here. Perhaps there were licensing rights. Jones's commentary is so exceptional I would still recommend the New Yorker release, even with its inferior transfer, solely for his contribution.

However, as sorely as Jones's commentary is missed (and not replaced by any other commentary track), Criterion has included what may be their best extra of the year, a 50-minute visual analysis by critic James Quandt. In “L'argent, A to Z,” Quandt covers an astonishing array of topics while somehow managing not to skimp on anything, providing an essential primer on Bresson's unique working style and philosophy, touching on Bresson's emphasis on sound (silence) and his various artistic influences, and so very much more. If you're looking for an informative and accessible introduction to Bresson, Quandt's essay is your go-to choice.

The disc also includes a May 16, 1983 press conference (30 min.) at the Cannes Film Festival, including Bresson and most of his cast. He is typically elusive and absolutely magnificent. The only other feature is a very short (26 sec.) trailer.

The insert booklet includes a new essay by critic Adrian Martin and a transcript of a 1983 interview with Bresson conducted by critic Michel Ciment.

Final Thoughts:
Twelve years ago, I asked if “L'argent” was the greatest final film by an esteemed director. I suppose “Eyes Wide Shut” is a serious contender, but there's no need to choose. I had some vague concerns when I screen “L'argent” for a film class a few years ago, but my students were blown away, which affirms both their taste and Bresson's accomplishment. How much do I love Bresson? Sometimes I think both that “L'argent” is my favorite film and yet not even my favorite Bresson. Yes, he's so great he generates his own paradoxical field. And he's even greater than that. This Criterion release is a bit light on extras, but the Quandt essay is sensational and the high-def transfer a thing of beauty.
Posted by Christopher Long at 8:58 PM