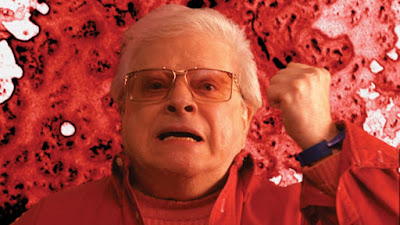 
(This DVD review was originally posted in 2009, re-posted today on the occasion of Harlan Ellison's 81st birthday.)

When I first met Harlan Ellison in person at a Los Angeles Screenwriting convention, he had just plowed his car into some poor, innocent working-class family who were just minding their own business but, as you know, that Ellison cat has a bad temper. Fortunately, the family was also in a car and nobody was injured. The accident not only failed to rattle Harlan, it fired him up to conduct the most memorable workshop I have ever attended. Except that workshop isn’t the right word. “Floor show” is the closest I can think of. Or maybe I should simply call it a performance, the best live performance I have ever had the pleasure to watch. I literally had tears of laughter streaming down my face for the entire hour, and I wouldn't dare use “literally” to mean “figuratively” because that might piss off the ever-grammar-lovin' blue-eyed Ellison and I don't need to get run over any time soon.

For Harlan Ellison, the frenetic stand-up routine was just another day at work. He’s been giving the same high-energy performance for the better part of five decades now, one that combines the art of writing and the art of living into a unified product that can only be described as... Harlan Ellison (his name is, appropriately, a registered trademark.)

Actually, I had already met Harlan Ellison the way most people do: through his writing. At a very dark time in my life, I picked up a short story collection called “Angry Candy” and my life was (here’s that word again) literally changed. Stories like “Paladin of the Lost Hour” and “The Function of Dream Sleep” were seared into my consciousness and led me farther down the path to masterpieces like “The Whimper of Whipped Dogs,” “Lonelyache” and “Adrift Just Off the Islets of Langerhans” as well as his most famous and re-printed works like “I Have No Mouth, and I Must Scream,” and possibly the greatest short story I have ever read, “Jeffty is Five.” Say this for the man, he sure has a knack for coming up with some great titles.

What speaks to me most in Ellison’s work is his exploration of morality in a godless universe. He is an outspoken atheist but certainly no relativist. In a world without natural guiding principles, we must create our own. In Ellison’s universe, morality does not stem from a fear of eternal damnation but from the need for men and women to treat other well. We have to take care of each other because nobody else is going to do the job for us. This sentiment is expressed beautifully and terrifyingly in “I Have No Mouth and I Must Scream” (talk about a hero making the ultimate sacrifice!) but also pervades much of his work. But let’s not overlook another appealing aspect of his writing, his sense of humor. Harlan is one damned funny son of a bitch. His vocal performance of his short story “I’m Looking for Kadak” is one of the most hilarious things I’ve ever heard. It also contains the unlikely pairing of the words “farkakte” and “butterfly.”

Ellison is one of the most decorated American writers of the 20th century, but the legend of Ellison the man exceeds that of the author. The story of how a little Jew from suburban Cleveland became a big shot writer in Hollywood and elsewhere has been told and retold so many times it is impossible to separate fact from fiction which, I believe, is just fine with Harlan.

When “Dreams with Sharp Teeth” opens, close friend Robin Williams grills Ellison about some of the legends surrounding him. Yes, he once mailed a dead gopher (fourth class, in the summer heat) to a publisher, but, no, he did not shove a fan down an elevator shaft. He once drove a dynamite truck and, even more daring, he once wrote an entire short story while sitting in a bookstore window in front of a crowd of gawkers. No wonder he has claimed that if he ever writes his autobiography it will be titled “Without A Net.” Harlan Ellison simply never stops. He has spent his life violating the laws of thermodynamics in every possible orifice. And that’s why he makes for a perfect documentary subject.

Director Erik Nelson avoids a dry overview of Ellison’s career and wisely turns his dynamic subject loose in front of the camera. Ellison reads from his short stories, relates personal anecdotes and launches into rants about the shortcomings of various members of his species. It doesn’t take much to work him into a state of high dudgeon. In Harlan’s words: “The two most common elements in the universe are hydrogen and stupidity.”

Ninety minutes of pure Harlan would be more densely packed than a neutron star. Nelson alloys the splenetic performance with interviews from friends like Williams, artist Neil Gaiman and writer Peter David. We also get a brief overview of Ellison’s life from his youth in Paynesville, OH to his brief and unsuccessful stint in the Army to his early days as a writer and counter-culture figure in the '60s. There is relatively little archival footage but there are a few treats for fans, including appearances on the Tom Snyder show and a brief snippet from a 1970 college seminar. Most welcome of all is an all-too-brief tour of the fabled Ellison Wonderland, Harlan’s unique L.A. home which you can’t miss if you drive past it, believe me. Ellison is an obsessive collector of all kinds of memorabilia. He has so many books that he actually has collapsible library stack shelves the kind you have to open with a crank. Now that's just cool.

Nelson began shooting this very low-budget documentary more than 20 years ago and gradually pieced together enough footage until he had the bones of a solid feature which he then fleshed out with archival footage and interviews. The film feels all of a single piece, united by the unflagging energy of its subject. A bold creative decision to provide animated backgrounds behind Ellison as he reads from his work pays off for the most part. It is not, however, the most visually pleasing documentary you will ever see.

Harlan Ellison has the natural arrogance of a supremely talented autodidact. He does not suffer fools easily, and from his tight-rope walker’s point of view there are an awful lot of fools down there (another Ellison quote: “You are not entitled to your opinion! You are entitled to an informed opinion.”) His abrasive, unapologetic personality may alienate some viewers who don’t buy into his shtick. That’s OK. Harlan Ellison doesn’t care if you think he’s a mook. He wrote “Jeffty is Five” and you didn’t, bucko. What the hell more can you ask for? Tell me. Somebody please tell me. 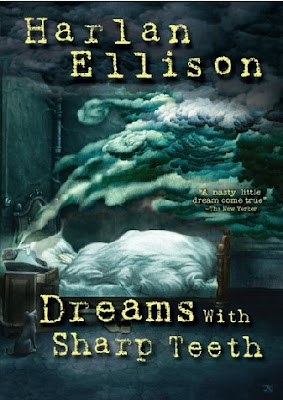 Video:
The DVD is presented in a 1.78:1 aspect ratio. The interlaced transfer is adequate to the task. Image detail is mediocre and you'll notice the weaknesses more when you freeze frame the picture but it's perfectly acceptable.

Audio:
The DVD is presented in Dolby Digital Stereo. No subtitles are provided.

Extras:
A WARNING to viewers who watch this DVD late at night and don’t want to disturb you neighbors: When you make certain selections from the main menu, Harlan will shout insults at you. What, this surprises you? Anyway, dial the volume down.

The DVD is loaded with extras to warm the cockles of any Ellison enthusiast.

Don’t let the title “Pizza with Harlan Ellison and Neil Gaiman” (40 min.) fool you. It’s about Harlan Ellison sharing pizza with Nail Gaiman. Relying on the same strategy that makes the film work, Erik Nelson just points his camera at Harlan and lets him go. The best part for fans is an epilogue to the dead gopher story.

“An Evening with Sharp Teeth” (21 min.) records the documentary’s April 19, 2007 debut at the Writer’s Guild Theatre in Los Angeles. Here’s how you know that you’ve followed a director closely. In the second shot of this feature, we see the back of a man’s head. I instantly thought, “Hey, that’s Werner Herzog.” It was. Herzog, whose documentary “Encounters at the Edge of the World” was produced by Erik Nelson, was in the same room as Harlan Ellison which I must admit sets my heart aflutter. It would be silly to pick just one artist in any field, but let’s just say that Mr. Ellison and Mr. Herzog are in the running for my favorite writer and director, respectively. Harlan shows off a picture of Herzog and him and all I have to say is: “Who do I have to kill and how soon do I have to do it?” I want that picture. Real bad like. (Ed. Note: Just an hour after I posted this review back in 2009, Erik Nelson e-mailed me a nice, high-res copy of the picture. Sometimes begging works.)

The one complete reading is a gem, “Prince Myshkin, and Hold the Relish” (12 min.) If you listen to Harlan perform “Myshkin” and you don’t laugh then you, sir, are simply an idiot.

I was holding out hope that the DVD would feature a tour of Ellison Wonderland, but I won’t complain too much.

Final Thoughts:
I’ve already had my say about the documentary. The DVD release offers some great extras though it leaves you wanting even more of Ellison’s readings. There are more available. I highly recommend the aforementioned “I’m Looking for Kadak” among others.