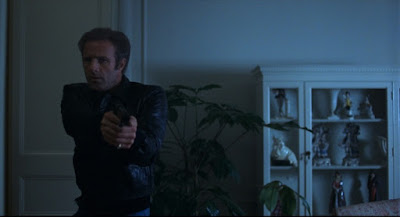 
Let us hark back to an ancient time, a mystical era known as the '80s, when master criminals were manly men with giant tools, the kind of tools that forced their users to grunt and sweat, great hulking tools that spewed giant arcs of flame. Real fire, not firewalls built to be hacked by myopic ectomorphs slouched over increasingly tiny keyboards. You needed hair on your chest, not Red Bull on your desk, if you wanted to move some serious capital back in the golden age.

For director Michael Mann, it was also a time of blue filters and tangerine dreams. “Thief” (1981) was Mann's theatrical debut after an apprenticeship in television that included an episode of “Police Woman” and the rock-solid TV prison movie “The Jericho Mile” (1979), and he intended to flex every stylistic muscle he had toned up. Mann portrays his hometown of Chicago as a sparsely-populated island enveloped by a darkness gashed only by flashing neon lights and slow-burning streetlamps, hemmed in on one side by a sprawling stretch of water that both promises and denies escape. Soft blues, muted reds, and orange sparks reflect off metallic surfaces; the hoods of cars can look like traveling kaleidoscopes, shimmering as they speed through the night. 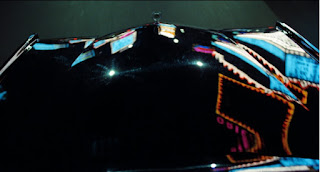 It's the perfect milieu for Frank (James Caan), a safecracker and diamond thief who operates as the consummate professional along with his equally efficient team. No need for attention or pizazz; just grab the goods and go. In the opening scene, Frank and partner Barry (James Belushi in his feature debut) pull off a nearly wordless heist that climaxes with Frank boring a gigantic drill through the cold thick steel of a safe door. The nearly ten-minute sequence is prominently accompanied by a pulsing electronic score from Tangerine Dream, a love-'em or detest-'em creative element that defines the movie's cool industrial attitude toward crime and the city.

After business it's time for pleasure, at least to the limited degree that Frank is capable of experiencing such an emotion. Frank is a state lifer, raised in an orphanage and handed over to the prison system where a short sentence for petty burglary morphed into a longer stint after the young man was forced to defend himself from jailhouse predators (or at least that's how Frank tells the story). More than a decade in the joint has chiseled a heart of stone; Frank proudly admits to Jessie (Tuesday Weld), a diner waitress who catches his eye, that he survived in jail only by getting to the point “where nothin' means nothin'.” 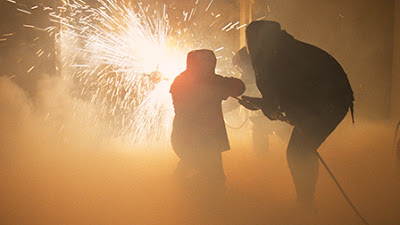 If you're looking for chinks in Frank's nihilistic armor, witness the way he eagerly flocks to the aid of his imprisoned mentor Okla (Willie Nelson), but this appears to be the exception. Even Frank's campaign to win Jessie's heart is strictly a business matter; he decided in prison that he wanted to settle down with a nice woman and have a child, and he's the sort of man who always follows through on his plans and by his own rules. When local gang boss Leo (Robert Prosky) tries to enlist the lone wolf in his ranks, Frank (who never uses contractions) means it when he replies, “I am Joe the boss of my own body.” Frank will soon remember what he learned in jail and ever so briefly forgets in the real world; you can only be in charge when you have no other responsibilities.

“Thief” is nominally based on Frank Hohimer's book “The Home Invaders,” though Mann claims he discarded everything but the basic idea. Mann's script is built mostly out of genre cliches: the hardened career criminal looking to make one last big score, the world-weary but loving woman who accepts his shady past, honor among thieves, the corrupt cops and two-bit gangsters who want a piece of the action. “Thief” distinguishes itself in terms of style and also by James Caan's lived-in performance; his hairy swagger and willingness to let actions speak louder than words make Frank entirely believable, even if unsympathetic. He is a bully and a narcissist whose tunnel vision and methodical calculation leave no room for the feelings of others. Knowing the tough upbringing that shaped him adds depth to the character, but still offers little to be fond of. He uses and abuses whenever he has the power to do so: “To hell with me, with you, with everything.” At least he's honest.

Mann's ultra-cool formalism has made him the favorite of many auteurist critics for reasons I've never fully understood. As a result, “Thief” is now often hailed as the precursor of a style-drenched decade, a game-changer, or something similar; as an auteur's first theatrical film, it simply must be historically important in some way. Better to set aside any alleged landmark status, and accept “Thief” as a crisply filmed, well-acted crime move that benefits immensely from the verisimilitude of its heist sequences. Real safes, real tools, real pillars of flame; these jobs are labor intensive, man. Pure sweat equity. It beats the hell out of the gravity-free zone of CGI action. Heck, there are even real pay phones here, and phone calls that can be missed if you're not there to take them. That's when men were men, and Mann was the Mann. 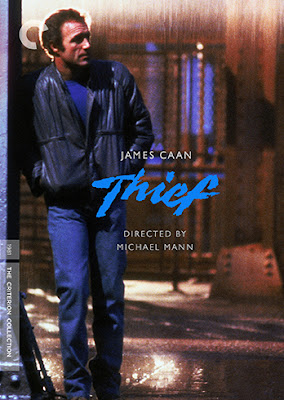 Video:
The film is presented in its original 1.85:1 aspect ratio. Criterion's 1080p transfer is virtually flawless, and I can only assume the vibrant chromatic palette is true to the original. It's easy to get lost in the precisely sculpted, moody imagery and the high-def treatment really brings it to life. There are plenty of nighttime scenes and the detail brought out in the darker shots is often remarkable; I'm sure fans who have only caught it on DVD will see things they've missed before. I can't think of anything to complain about.

Audio:
The DTS-HAD Master Audio 5.1 surround track is equally impeccable. Whether you love them or not, you get Tangerine Dream's score vividly presented in all its abstracted glory. The industrial sounds of men at work and the ambient sounds of the city all come through on this evocative surround track. Optional English subtitles support the English audio.

Extras:
The film is accompanied by a commentary track by Michael Mann and James Caan. It was recorded in 1995, and was included on the long-ago released SD by MGM/UA.

The rest of the extras are all newly recorded interviews. Critic Scott Foundas interviews Mann (2013, 24 min.) who discusses growing up in Chicago and his reliance on real-life thieves as consultants and actors (safecracker James Santucci plays a crooked cop in the film). We also get a new interview with James Caan (2013, 10 min.) who lists “Thief” as one of his proudest accomplishment and a new interview with Johannes Schmoelling, formerly of Tangerine Dream (2013, 16 min.) The disc also includes a Theatrical Trailer (2 min.)

Final Thoughts:
I haven't liked a Michael Mann film in quite a while, but his career got off to a fine start with this stylistic crime movie and later peaked with the only true Hannibal Lecter (or Lecktor) movie, “Manhunter” (1986). Criterion's high-def transfer is superb; fans might have hoped for more extras, but the new interviews are certainly worthwhile.
Posted by Christopher Long at 9:26 PM