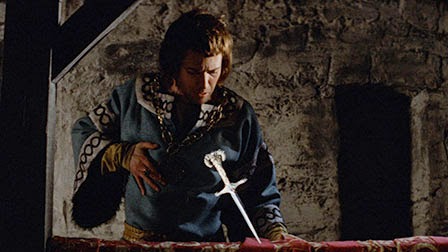 Roman Polanski's 1971 adaptation of Macbeth is long on action, but pointedly short on grandeur. Yes, this is a history of “great men” crossing swords for control of a kingdom, but what a shameful, shabby affair it all is. When the king (Duncan, before he gets MacSnuffed) and his courtiers gather in the throne room to celebrate victory in battle, they look like precisely what they are: a tiny group of poorly-groomed sycophants clustered in a filthy little room in order to curry favor and get drunk.

Macbeth (Jon Finch) only distinguishes himself from the pack by the extent of his ambition. Where Shakespeare's villain was at least courageous and valiant in his own way, this Macbeth is just a cruel opportunist. He's not particularly cunning or even charismatic, just an efficient and willing brute. Even his frequent expressions of guilt for his misdeeds fail to convince; this thug cannot feel remorse, only fear for his own well-being. Though he mounts an impressive final stand, by the time his head winds up on a pike the viewer is left with one main thought, “What a loser.”

The script, co-written by Polanski and famed British theater critic Kenneth Tynan, exhibits no admiration for its wretched subjects. Francesca Annis initially sparks interest as the scheming Lady Macbeth, her innocent appearance a stark contrast with her sadistic impulses, but her descent into madness plays out as good riddance to bad rubbish. She's gone and quickly forgotten, and soon the same will happen to her husband.

Cinematographer Gilbert Taylor, a long-time Polanski collaborator, develops the visual equivalent of the script's jaundiced perspective, depicting 11th century Scotland (shooting on locations mostly in Wales and England) as a grimy, murk-shrouded patch of nothing hardly worth fighting for. There is intermittent beauty in some of the more distant wide-screen panoramas and the silhouetted hills and forests, but nothing the Scottish tourism board will be using in its brochures. 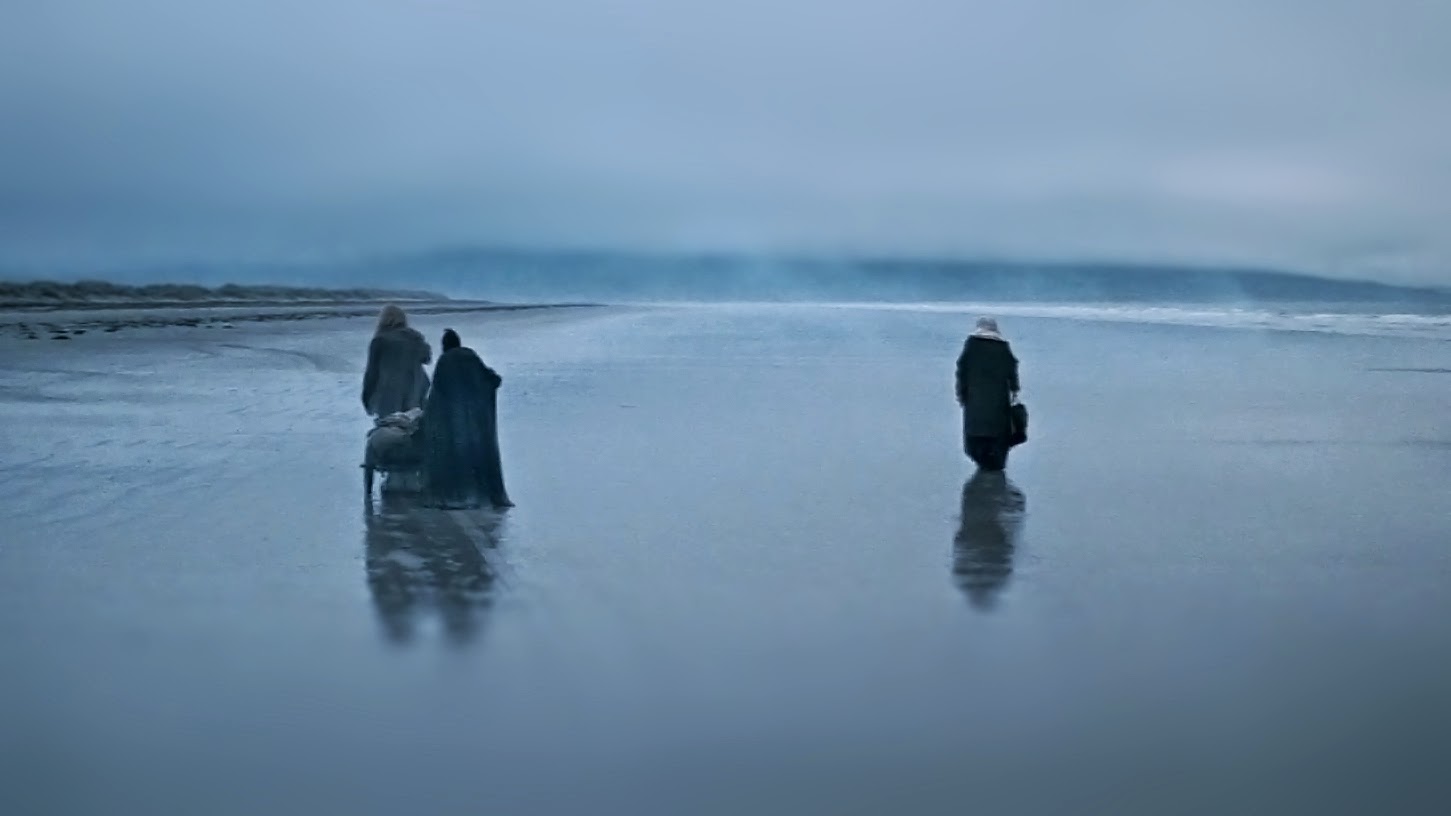 The release of “Macbeth” in America was overshadowed by the circumstances of its production. It was the first film produced by Hugh Hefner's Playboy Production which meant it was preceded by expectations that it would be tasteless (it's not) and graphic (it is). “Macbeth” was also the first film Polanski made after the murder of his pregnant wife Sharon Tate, and critics (both then and now) couldn't help but see echoes of the real-life tragedy in the movie, particularly when Macbeth's soldiers murder the wife and children of his foe Macduff (Terence Bayler).

Perhaps this explains why so much of the commentary lingered on the film's alleged extreme gore and violence. The film does shift the murder of Duncan from off-stage to on-screen with a nifty geyser of blood as punctuation, but there is nothing exploitive or gratuitous in the movie. Polanski needed a brutal film to highlight the brutishness of his characters. An early scene in which a soldier stands over a wounded man lying face-down in the mud and promptly bludgeons him to death is the first subtle hint that we're not in King Arthur's chivalrous court. 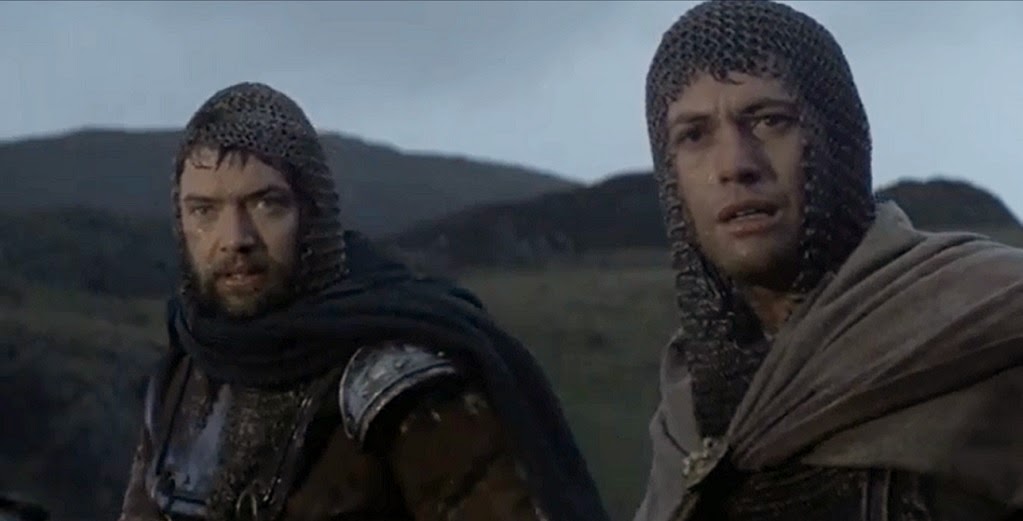 Essentially, Polanski's interpretation of Macbeth boils the story down to another round of the time-honored game of “crown goes on, head comes off.” And Macbeth doesn't matter one whit more than any of the other fools who played and lost. Few directors were better suited to portray the futility and absurdity of their schemes than Polanski.

The film may suffer a bit by comparison to some of its peers. As an adaptation of the Scottish play, it is no “Throne of Blood,” but then nothing is. As a cynical deflation of medieval heroism, it is certainly not the equal of Robert Bresson's “Lancelot du Lac,” released just a few years later. But then nothing is. And in Polanski's oeuvre, it surely slots behind “Chinatown,” “Rosemary's Baby,” and several other works. Good thing there's plenty of room beneath the highest of bars for quality cinema. 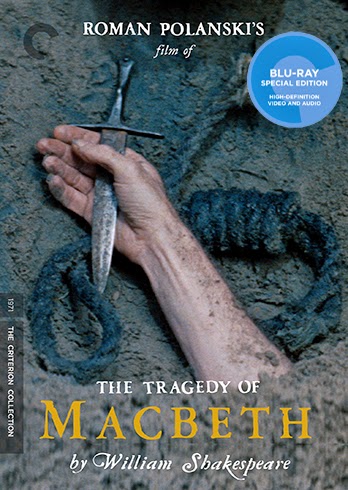 Video:
The film is presented in its original 2.35:1 aspect ratio. Criterion's 1080p transfer is typically excellent with a rather muted color palette throughout – of course it's hard to tell under all the cloudy skies. Image detail is sharp enough to enhance the grimy, run-down feeling of it all. From the Criterion booklet, “The picture was restored by the Criterion collection... (and) additional restoration work was performed by MTI in Los Angeles and Sony Colorworks in Culver City, California.”

Audio:
The DTS-HD Master Audio offers a slightly unusual 3.0 surround track, staying true to the original source. The clanging of swords and thumping on castle gates ring loud and true in a mix that provides a real sense of depth and place. Music by The Third Ear Band (including a fantastic end credit track) is well-preserved. Optional English subtitles support the English audio.

Extras:
Criterion offer a lengthy feature which intercuts new 2014 interviews with Polanski, producer Andrew Braunsberg, assistant executive producer Victor Lownes, and actors Francesca Annis and Martin Shaw (who played Banquo). I winced when Polanski dismissed “Throne of Blood” as not being a real adaptation (he's not criticizing the film, just making the bizarre claim that since it's in Japanese it's not really Shakespeare) but there's plenty of detailed information here, though the various commentaries lean heavily towards a defensive position, i.e. this amazing film was horribly treated by distributors and critics.

“Polanski Meets Macbth” (47 min.) is a 1971 making-of feature with lots of on-set and behind-the-scenes footage. It was directed by Frank Simon and is clearly promotional in nature but still of interest.

The disc also includes two television excerpts. “Two Macbeths” features Polanski and British theater director Peter Cole discussing their different adaptations of Macbeth. The footage (30 min.) is from the Jan 27, 1972 episode of British program “Aquarius.” Of much greater interest is an excerpt from the May 7, 1971 episode of the Dick Cavett Show with co-screenwriter Kenneth Tynan as guest. Only the last few minutes of this thirteen minute segment addressed “Macbeth” but Tynan is such a magnetic raconteur, and Cavett such a fine reviewer, you'll want to watch if only to pine for the days of substantive talk shows.

A Trailer (4 min.) played at the Playboy Theater and promised patrons both a major renovation and the world premiere of “Macbeth.”

Film Value:
I don't know that there's a clear winner in the contest for Roman Polanski's bleakest depiction of human nature. But “Macbeth” is indisputably in the running. This Criterion Blu-ray offers a strong transfer and a substantial collection of extras, making it the definitive North American release of the movie.
Posted by Christopher Long at 5:35 PM