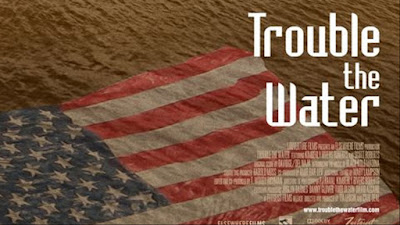 (An edited, updated re-post of my 2009 review of what I still consider to be the best of many fine documentaries about Hurricane Katrina.)


Nothing is real in cinema! The minute you choose what to film and not to film you are creating fiction. Editing is manipulation. Even a documentary is crafted into a narrative form so it’s really fiction.

None of that is entirely wrong, but it entirely misses the point.

For all the critical and theoretical hand-wringing about the difference between truth and fiction in cinema, and the possible lack thereof, the power of many (not all) documentaries stems quite simply from the fact that they refer to real events. However manipulated it might be, documentary cinema carries a specific power that fiction only occasionally achieves. Bill Nichols calls it the indexical whammy, the recognition by the viewer that the sounds and images in the movie “really happened.”

This whammy powers the core of “Trouble the Water” (2008), one of the most emotionally wrenching documentaries I have ever seen. Though the film is directed by the team of Tia Lessin and Carl Deal, the most mesmerizing footage is that taken by New Orleans 9th Ward resident and aspiring rapper Kimberly Rivers Roberts. Roberts turns on her video camera in the days ahead of Hurricane Katrina to tell the “real story” as she and her neighbors hunker down in advance of the storm.

For viewers today, the early scenes are filled with the dread of knowing what’s coming. Roberts and her husband Scott don’t take things lightly, but even with TV warnings they can’t possibly know that the levees are about to be breached. After all, George W. Bush said there was no way to anticipate it (despite multiple warnings from engineers over the years.) It’s hard not to notice that, even before Katrina hits, Roberts' neighborhood already looks like it’s been partially abandoned though video taken two weeks later shows that things really could get worse, a lot worse. 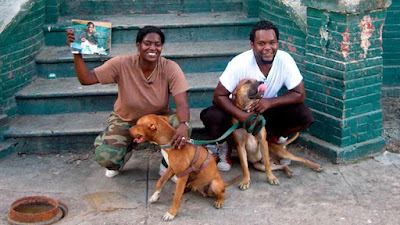 The footage Roberts shoots during the storm is extraordinary and these scenes are more harrowing than virtually anything a feature film can produce. There’s the indexical whammy again. Replicate these exact images in a fictional context and you have another generic disaster movie; knowing that they're real lends them a unique and enduring power. The water builds and builds, forcing Kimberly and Scott retreat to ever higher ground until they finally share an attic with several other residents. Kimberly projects an optimistic spirit even as they huddle together: I got food and beaucoup water, just help yourself!

“Help yourself” is the operative phrase for anyone left behind because, as we all know by now, neither the federal nor local government was about to ride in on Mike Brown’s Arabian horses to save the day. In an absolutely riveting video sequence, Roberts' neighbor Larry literally comes floating by on a punching bag which he uses as a flotation device to take people one by one to safer ground as he swims through water that swells above the stop sign on the corner. Lessin and Deal deliver the final heartbreaking touch by following up the scene with several recorded 911 calls: “The police are not coming out until the weather gets better.”

And they’re not coming out next week or the week after that. Amazingly, when Deal and Lessin revisit the 9th Ward a year later it looks little changed from one week after Katrina. Any anger we feel about the lack of federal and local response during the storm is only amplified in the following months as Kimberley and Scott, like thousands of other Katrina survivors, are stymied at nearly every turn as they seek help. Still they soldier on.

“Trouble the Water” isn’t just a cry against the impotence of a government that failed in its most basic responsibility, but also an affirmation of the power of self-actualization. People like Kimberly and Larry and others come together in a time of need and survive because of their fortitude and cooperation. And the following weeks and months provide even more opportunity for them to use the experience to grow and re-focus their lives, each with varying degrees of success. Not that anyone (rational) watching this movie will ever think of Katrina as a “good thing.”

Kimberly Roberts (AKA Black Kold Madina) is an amazing subject, so it’s only appropriate that the film’s non-Katrina centerpiece is when she performs her rap song “Amazing.” “I don’t need you to tell me that I’m amazing. Come on and take a look and know that I’m amazing.” I cannot remember the last time I was left so slack-jawed by a musical performance.

Come on and take a look at “Trouble the Water” and you won’t need me to tell you that it’s amazing. And it really happened. Whammy. 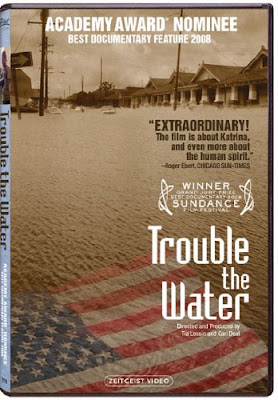 Video:
The documentary is presented in an anamorphic 1.78:1 transfer from Zeitgeist Films. The film mixes Kim’s footage with footage taken by Deal and Lessin as well as media clips from the various news channels covering Katrina, so the image quality varies. Roberts' video footage is pretty soft and it’s tough to get a really nice looking still frame from it but I think she can be forgiven for shooting under trying conditions. Lessin and Deal’s footage is crisp and often beautiful even when surveying the damage left behind in a city that still hasn’t been rebuilt.

Audio:
The DVD is presented in Dolby Digital 2.0. Optional English and Spanish subtitles are offered to support the English audio. Forced subtitles are included for some of the dialogue that’s difficult to make out during the storm.

Extras:
Zeitgeist has included a handful of interesting extras.

The DVD also includes a Q&A from the 2009 Roger Ebert Film Festival (23 min.) with a panel discussion featuring Deal, Lessin, and Kimberly and Scott Roberts and moderated by Richard Roeper.

Also there is a Q&A from the August 2008 New Orleans premiere of the documentary (14 min.)

The final feature shows Kimberley’s meeting with Mayor Ray Nagin at the Democratic National Convention (3 min.) It is identified as being August 27, 2009 but my hunch is that it was really in 2008.

Final Thoughts:
“Trouble the Water” is one of the best documentaries of the new millennium. If you don’t find yourself moved by this direct kick in the gut then there’s something very wrong with you.

The DVD is being released on August 25, 2009 only a few days from the fourth anniversary of the Katrina disaster. Update on 8/30/15: And ten years after Katrina, the movie is every bit as potent.
Posted by Christopher Long at 12:49 PM