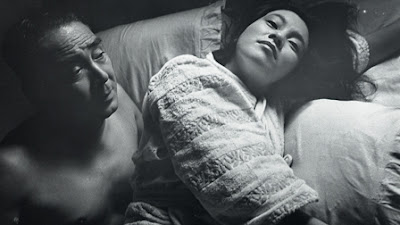 (On the occasion of the 90th anniversary of director Shohei Imamura's birth, here's a re-post, with substantial revisions, of my review of the 2009 Criterion set "Pigs, Pimps, and Prostitutes." Well, of two-thirds of it anyway. I'll get to "Intentions of Murder" some day, I promise.)


Shohei Imamura was one of the leading figures of what would eventually be called the Japanese New Wave, more a marketing ploy than a film movement, intended to piggy back on the success of the Nouvelle Vague. New Waves were crashing ashore almost everywhere in the '60s even long after the French directors had ceased to be commercial draws.

There is no direct connection between Godard’s “Breathless” (1960) and Imamura’s “Pigs and Battleships” (1961) but it’s hard not to see some similarities between the male protagonists. Just as the stylishly doomed Michel Poiccard fashioned himself a gangster from the classical Hollywood mold, Kinta (Hiroyuki Nagato) is a young man who expects to make it big as a glamorous criminal.

Godard’s film is heavily laden with irony, but still indulges in the fantasy of the American gangster film. Imamura’s movie is the opposite, a jaundiced, de-romanticized study of the world of low-level crooks (chimpira, a notch or two below the yakuza) just barely scraping out a filthy existence in the decrepit port city of Yokosuka, a former fishing village turned U.S. naval base .

There’s nothing pretty about the world of the chimpira, and there’s nothing pretty about Imamura’s portrayal of its people, rendered in stark black-and-white. At first blush, “Pigs and Battleships” might appear to be an anti-American film. The U.S. sailors are universally depicted as huge brutish louts who speak more in semi-coherent grunts than in comprehensible English. They bully the locals and frequent the whorehouses.

But an establishing high crane shot situates all of the town's denizens as cosmically insignificant, and the Japanese citizens don’t come across any better than their American counterparts. Kinta’s road to gangster’s paradise runs right through a pig farm, his gang's primary business. The bosses spend most of their time worrying about how to scrape together enough money to feed the swine herd, and the main drama revolves around an attempt to negotiate a deal for scraps from the naval base. And like the pigs on the farm (and of the title) these small-time hoods all nuzzle up to the same trough, rooting around for the last bit of rancid melon or hardened crust of bread.

The women don’t fare much better with the exception of Kinta’s girlfriend Haruko (Jitsuko Yoshimura) who works in a small bar frequented by the gangsters. Her mother wants nothing but the best for her, or rather for herself. Mom’s plan is for Haruko to become the mistress of an American sailor in exchange for a monthly stipend, and she can’t understand why her stubborn daughter isn’t willing to shoulder her fair share of the family burden.

Haruko ultimately emerges as the true protagonist as Kinta’s delusions of grandeur don’t survive a brush with reality. Haruko’s ability to recognize and react to changing circumstances enables her to break free of this squalid world. The adaptability of women under duress is a theme that connects the first two films in this set. 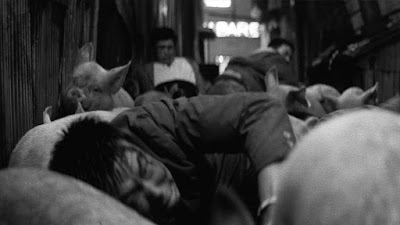 There are some inspired moments in “Pigs and Battleships,” as Imamura indulges his penchant for off-kilter camera angles and disorienting cross-cutting, but none more so than the climactic shootout which results in an army of pigs stampeding through the town’s crowded, neon-drenched streets. The gangsters run for their lives from the seemingly endless wave of swine, and the metaphor is barely subtle enough to qualify as a metaphor. The film is miserable, depressing, disgusting, and absolutely brilliant.

“Pigs and Battleships” looks like “Mary Poppins” compared to the grotesque world of “The Insect Woman” (1963), Imamura’s follow-up to the modest breakout success of “Pigs.” Tome (Sachiko Hidari) is the “insect woman” of the title (which, in the original, is actually “Japanese Etymology”) though she can better be described as a chameleon. Born a bastard child into a world with no good options, she scrambles as best she can to survive.

Tome won’t grow up with many happy memories of childhood. The older women in her family, including mom, see her as either a burden or a possible wage earner. Papa, meanwhile, sees her as a ready and willing sexual partner, and the film goes to great lengths to detail their relationship, with at least one shocking scene that won't quickly be forgotten.

Tome escapes to the city where she shuttles between various menial jobs, eventually winding up as the madam of a brothel. Once again she finds an older man (who she calls Papa) who takes advantage of her. But now there’s a difference. Tome is strong and willful enough to take advantage in return and she uses her abilities (her sexual attractiveness, her intelligence, her ruthlessness) to secure the best living she can.

Both films are relentlessly grim but both provide an escape for one of the female characters. In “Insect Woman” it’s Tome’s daughter Nobuko (Jitsuko Yoshimura again) who breaks the grim cycle. In a twisted way, the film is a take on the maternal melodrama in which mom sacrifices everything to save her little girl though Tome won't win any Parent of the Year awards.

“The Insect Woman” was Imamura’s major breakthrough hit, presumably because it contained just the right amount of perviness under just enough of an art-house sheen to attract both a commercial audience and international festival crowds. To me, it’s not nearly as interesting as “Pigs and Battleships” but it’s certainly an unforgettable movie and its seemingly arbitrary use of freeze frames is something I’ve never really seen before. It’s also quite innovative (and occasionally irritating) in its disorienting method of skipping rather abruptly ahead in time, cutting off subplots and replacing them with new ones as it spans roughly forty years in Tome’s life.

This boxed set also includes a third film, “Intentions of Murder” (1964) which I have not yet had the opportunity to see, save to skim about ten minutes to check for video and audio quality. 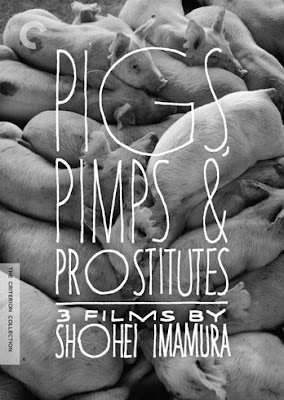 Video:
Finally, I get to write something less than glowing about a Criterion transfer. All three films are presented in their original 2.35:1 aspect ratios. The transfers are strong by most standards, but just so-so on the Criterion scale. All three films are shot in black and white and the contrast isn’t quite as sharp as we’ve become accustomed to from this studio. “Insect Woman” in particular looks slightly dull in some shots. Still, these are all solid efforts.

Audio:
The DVDs are presented in Dolby Digital Mono. The sound mixes are expectedly flat but clean and efficient. Optional English subtitles support the Japanese audio.

Extras:
Each of the three films is housed in its own keep case. All three cases are stored in a cardboard slipcase.

Each disc features a video essay by critic Tony Rayns (from 13-15 min, each).

“Insect Woman” and “Intentions of Murder” each include an Imamura interview (21 min. and 24 min, respectively) conducted by critic Tadao Sato.

Final Thoughts:
Imamura had quite a run in the '60s from “Pigs and Battleships” to his hit “The Pornographers” (1966). His career was a bit more uneven in the '70s but he managed a critical hit with “Vengeance is Mine” in 1979. He came storming back with two Palme d’Or winners at Cannes: “The Ballad Of Narayama” (1983) and “The Eel” (1997) which shared the top award with Abbas Kiarostami’s magisterial “A Taste of Cherry.” Imamura’s last feature film was “Warm Water Under a Red Bridge” (2001.) He died in 2006 of complications from liver cancer.
Posted by Christopher Long at 12:08 PM