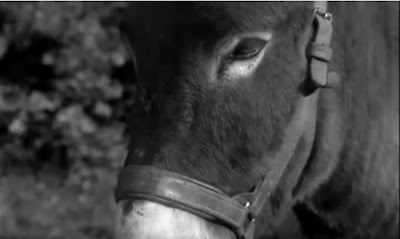 (On Friday Sep 25, 2015, TCM will be showing Bresson films most of the day. The marathon ends with "Au hasard Balthazar" at 6:15 PM Eastern. I am re-posting my 2005 review, one of the earliest ones I ever wrote, to encourage you to tune in or at least set your DVR. The blog also includes reviews of "A Man Escaped" and "Pickpocket" which are part of TCM's Bresson-o-thon as well.)


“Acting is for the theater, which is a bastard art.” - Robert Bresson

Robert Bresson (1901-1999) produced one of the most singular and challenging bodies of work in the history of cinema. He ruthlessly stripped all the extraneous components from his films until only the most essential elements remained. Bresson’s films are austere, meticulous and precise; the term “minimalism” does not do them justice, they can only be described as “Bressonian.” Some view his films as slow and arduous while others see them as the “purest” movies ever made: the Bresson cult is a fanatical one and I proudly count myself a member.

One of the defining aspects of Bresson’s work is his approach to acting. Bresson (after his first few features) did not employ traditional actors but rather used “models” – non-professional actors he trained to speak and act as inexpressively as possible. The typical Bresson model has a blank, impassive look (“the Bresson face”) and moves slowly and deliberately. Bresson often shot numerous takes in order to exhaust his actors so that their actions and line readings would become as mechanical and automatic as possible. He sought a performance style devoid of inflection; a model does not “look longingly” but merely looks, does not “stand nervously” but merely stands; the goal was action, not acting (method actors need not apply). Even in highly emotional moments, the characters speak and act perfunctorily, and sometimes their detachment seems at odds with the events being depicted. Furthermore, Bresson filmed these automaton-like models in flat, frontal stagings (almost always using a 50mm lens) with limited camera movement.

What was Bresson’s purpose in draining all the traditional elements of drama from his films? Critic James Quandt describes it best: “(Bresson) produced a cinema of paradox, in which the denial of emotion creates emotionally overwhelming works (and) minimalism becomes plenitude.” Fanatical restraint and precision unleash depths of feeling that cannot be accessed through standard drama and pathos, or at least that was Bresson's belief. The non-actor models are crucial to this endeavor; any signs of theatrical, self-conscious acting break the spell.

Bresson found his ideal model in Balthazar, the donkey who is the protagonist of “Au hasard Balthazar” (1966), a central work by one of the greatest directors in the history of the cinema. Jean-Luc Godard famously claimed that the film conveyed “the world in an hour and a half,” and it could also be described as the world contained in a donkey’s eyes. Balthazar’s blank, impenetrable stare carries an infinite depth of meaning simply because it is so fundamentally unreadable. Balthazar is unlike any other movie animal you have seen, in large part because he is simply an animal. He is not cute or smart or quirky; he is a donkey and nothing more, which is to say he is everything.

Some have described “Au hasard Balthazar” as a film told from a donkey’s point of view, but this is not accurate. The film does follow Balthazar’s life from birth to death, but only in the beginning and end does the story directly concern him. At first, Balthazar is cherished as a pet by adoring children who baptize him, but his peace is short-lived as he is whipped, yoked, and put to work. He will spend most of the rest of the film passing helplessly from one sadistic or indifferent owner to another. 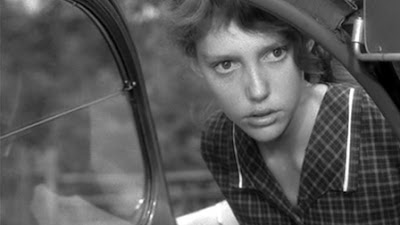 His first owner Marie (Anne Wiazemsky, who, a year later, became the second Mrs. Jean-Luc Godard) dotes over him, but she is a lazy, self-absorbed girl. In one scene, she decorates Balthazar with branches and flowers, making local tough guy Gerard (Francois Lafarge) jealous. He and his gang beat Balthazar cruelly while Marie watches in hiding; her affection for the animal does not extend to risking her safety for him. Later, Marie falls in love with Gerard and forgets all about the poor little donkey.

Abused by Gerard and abandoned by Marie, Balthazar eventually collapses from exhaustion. Gerard volunteers to “end his misery,” but the donkey is rescued by Arnold (Jean-Claude Guilbert), the town lush. Life gets better for Balthazar, but only briefly. Arnold is kind when sober but vicious when drunk, and he beats Balthazar savagely with a bottle. Balthazar escapes to a circus where he is briefly a star, but later he is sold to a wealthy miser who is so stingy that he barely feeds the donkey and won’t even buy him a proper saddle harness; it is more economical simply to kill the beast if it gets too sick to work.

Through all these ordeals, Balthazar is merely a passive observer. The humans’ stories spin all around him, and he takes almost no part in them, hovering constantly on the periphery of our perception. When the gendarmes come for Arnold, we see Balthazar through a window as he grazes in a field; in another scene, Balthazar stands idly at a hitching post as rowdy youths set off firecrackers in the street. In fact, the stories could easily take place without Balthazar’s presence at all, yet time and again Bresson returns to shots of the donkey merely standing and watching. He serves as a mute and uncomprehending witness to the human dramas that surround him and which, ultimately, determine his fate. 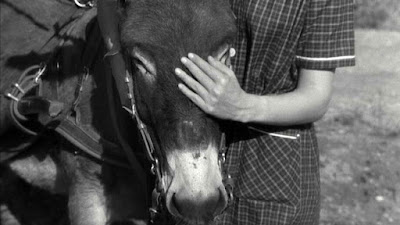 The cruelty of the humans seems all the more terrible because of the detached quality of the performances: Marie’s slack-jawed look and slumped shoulders, Gerard’s clipped movements, Arnold’s near immobility at times. Their callousness is a thoughtless byproduct of indifference. Through its restraint, “Au hasard Balthazar” accumulates an extraordinary power, and Balthazar, even though he seldom actually “does” anything, becomes one of the most memorable characters in all of cinema, achieving a sublime grace through the terrible suffering he endures. This is Quandt’s paradox again: the denial of emotion produces overwhelming emotionality. “Overwhelming” is the key word here. “Au hasard Balthazar” possesses a potent affective force that will stick with you for days, weeks, maybe even the rest of your life.

Bresson’s films demand an active audience. Bresson stated, “The flatter the image is, the less it expresses, the more easily it is transformed in contact with other images.” The flat images can also be transformed by the audience; a key to the power of Bresson’s work is that the emptiness of the image invites the viewer to fill it with his or her own meaning. Balthazar’s big, round, empty eyes are the film’s most enduring image and you will either see in them great profundity or merely the vacant stare of a dumb animal; which you see depends in large part on your degree of engagement with the movie. Bresson’s films are living texts which change with each viewing and yield great rewards to the attentive, involved watcher.

Bresson was a master of rhythm and tone, and few directors ended their films on such perfect notes as he consistently did. I will not spoil the ending of this deceptively simple story that improbably transforms into a spiritual journey save to assert that is one of the most poignant and moving endings I have ever seen. On the first viewing, I was shaken by the final scene, and on the third viewing I wept openly, not out of sadness but from something more powerful. I can only describe it as the sense of witnessing the infinite or perhaps the ineffable (I have a similar reaction to the ending of “2001: A Space Odyssey which I have always thought of as a spiritual film for the atheist.)

Some commentators (most notably Paul Schrader) have described Bresson as a transcendental director. I don’t agree with that label, but if there is a transcendent moment in Bresson’s films, it is here, as this gentle little donkey kneels down in a field, with a flock of sheep milling about him, the bells on their collars chiming a mournful chorus. It is an ending both beautiful and terrible to behold and I often think it is the single greatest achievement world cinema has ever produced. 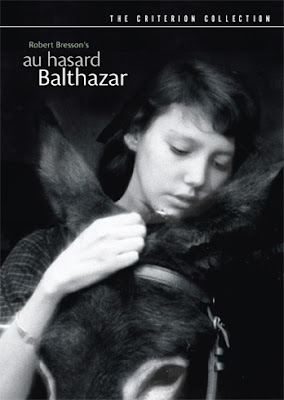 Video:
The DVD presents the film in its original theatrical aspect ratio of 1.66:1. The black-and-white photography is crisp, with richt contrast. Often when we describe cinematography as beautiful, we mean that the film offers gorgeous, ravishing imagery: sweeping landscapes, deep focus, etc. Such pictures would be out of place in a Bresson film, yet the photography is beautiful nonetheless and the new transfer more than does justice to it.

(Added 9/24/15: However, a decade after Criterion released this fine DVD, we still await a North American region Blu-ray upgrade. Here's hoping we don't have to wait much longer.)

Audio:
The DVD is presented in Dolby Digital Mono. I did not even attempt to describe the soundtrack in my review because it would require at least another thousand words just to scratch the surface. Bresson made use of sound perhaps more effectively and expressively than any other director (only Kubrick and Lynch spring to mind immediately as contenders) and it is probably not possible to preserve the full texture of the sound on a DVD, but this sound transfer is certainly an admirable effort. The sound effects are well-mixed and separated. The film makes notable use of Schubert’s sparse and moving Piano Sonata no. 20 which sounds just right here. Optional English language subtitles support the audio.

Extras:
If ever a Criterion release desperately called for a commentary track, it is “Au hasard Balthazar,” but we do not get one here. However, the other extras are worthwhile offerings. A twenty-minute interview with scholar Donald Richie (getting a rare chance to talk about a non-Japanese film) serves as an excellent introduction into the Bressonian oeuvre.

“Un metteur en ordre: Robert Bresson” (70 min.) is a 1966 French television program about Bresson and the making of “Au hasard Balthazar.” Godard, Louis Malle and the cast of the film also appear. It is clear from watching this extra that Bresson was already firmly established as a cult director whose status bordered on beatification.

In the spirit of Bresson, I will keep it simple: “Au hasard Balthazar” is a masterpiece. Possibly the greatest film ever made. I undersell it by a wide margin, of course.
Posted by Christopher Long at 6:16 PM