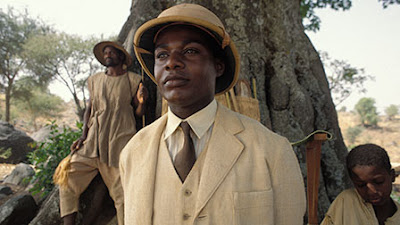 
The road to tragedy is marked by comedic mileposts in “Mister Johnson” (1990), a film built out of incongruities.

A title card informs us that the action begins in “West Africa 1923” but the film takes place (and was shot almost entirely in) Nigeria, northern Nigeria to be more specific. The constantly smiling Mister Johnson (Maynard Eziashi), a transplant from southern Nigeria, looks resplendent in his immaculately white English-style suit and fancy English-style shoes as he proudly rides his English-style bicycle among the locals he describes as “savages.” Of course he tends to use the disparaging term only in the presence of his English bosses, including his “good friend” Mr. Rudbeck (Pierce Brosnan); he has nothing but praise for his countrymen in his leisure time. Praise, vows of eternal loyalty, promises to pay off debts in the future. Mr. Johnson adapts readily to any social situation.

Mister Johnson (the only name he is ever called, even by his wife) considers himself an Englishman through and through, often referring to the country as “home” and striving to conduct himself as a proper British gentleman at all times. This perception sets up many of the film's wry observations about the total incompatibility of cultures. As the beaming Mister Johnson marries his beloved Bamu (a radiant Bella Enahoro), he eagerly answers the presiding chaplain with the standard “I do.” When Bamu is asked whether she “takes this man” she turns with a confused look to her father and asks, “Didn't he give you the money?” They both shrug and endure the superfluous white man's ceremony.

Director Bruce Beresford (in his first film after the Oscar-winning “Driving Miss Daisy”) and screenwriter William Boyd, adapting a 1939 novel by British writer Joyce Cary, may mine humor from Mister Johnson's precarious perch between two worlds, but they never make fun of him. It would almost exceedingly difficult to do so. Eziashi, a London-born actor of Nigerian descent who makes his film debut here, drives every scene with his undaunted optimism. Though Mister Johnson is a petty crook and even a bit of a con-man, he is incapable of lying because he invariably believes whatever he is saying regardless of its tangential relation to reality. It's true while he says it, and what else matters? Tomorrow is a nebulous concept composed entirely of infinite promise, a promise that can only be achieved by embracing each moment to its fullest and seeing every possibility as a certainty.

This makes Mister Johnson the oddest of protagonists, an ambitious man who will do whatever he needs to in order to achieve his goals and yet somehow remains sincerely pleasant and well-meaning at all times. Naturally, he is doomed.

Doomed, but resilient. Mister Johnson's can-do attitude sees him bounce back from adversity time and again. His cushy job as Rudbeck's personal assistant ends abruptly when he is scapegoated for an accounting irregularity, but he easily slides into his next gig, working for Sargy Gollup, a violent, racist trader played with loathsome verve and surprising sympathy by Edward Woodward. Once work with Gollup dries up, Mister Johnson finagles his way back into Rudbeck's good graces and helps his “good friend” build a road from their small village to a major trade route a hundred miles to the north. It will be a great success for Rudbeck, not so much for the village. Or for Mister Johnson. Friendships built on fundamental inequities invariably claim victims. I'll leave the ending for you to discover yourself; if you're at all familiar with Beresford's 1980 film “Breaker Morant” you have some indication of what's coming.

“Mister Johnson” was the first American film shot in northern Nigeria, providing a logistical challenge that was deftly managed by independent producer Michael Fitzgerald. “Mister Johnson” was really Fitzgerald's baby, or more properly it was the dream project of one of Fitzgerald's mentors, the legendary director John Huston (Fitzgerald produced Huston's “Wise Blood” and “Under the Volcano.”) Huston admired the Joyce Cary novel and wanted to film the adaptation, but never got around to it before his death in 1987. Fitzgerald wouldn't let the dream die with Huston and quickly got to work on realizing the project, hiring Beresford and Eziashi while also finding a crucial in-country collaborator in Nigerian cultural powerhouse Chief Hubert Ogunde who made the entire production possible in a country with limited infrastructure for a major motion picture shoot. 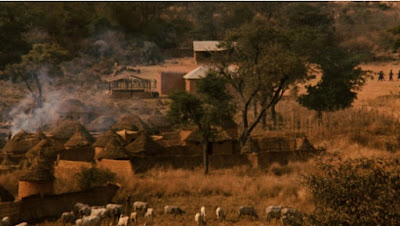 Cinematographer Peter James takes full advantage of the location shooting, rendering Nigeria in lush green and golden hues; the sun is a constant, defining presence even in the close quarters of the film's grueling denouement. Sets constructed for the shoot look entirely convincing (at least to these Western eyes) and, aside from most of the major roles, the film was cast predominantly with local talent.

Gorgeous photography aside, the film's main feature is Maynard Eziashi, whose pearly smile and hyperactive eyes that hint at a thousand simultaneous schemes helped him earn a justified Silver Bear for Best Actor at the Berlin Film Festival. Mister Johnson is an unforgettable character, trapped between two worlds but prisoner of neither. I don't know that the film has anything particularly new or complex to say about colonial occupation beyond its obvious cruelty and absurdity and maybe it's a bit too pretty for its own good. However, if the film's rambling episodic structure leaves its sociopolitical critique somewhat unfocused, it leaves us plenty of time to walk the same sad and funny trail as Mister Johnson; thanks to Eziashi's magnetic performance, that's more than enough. 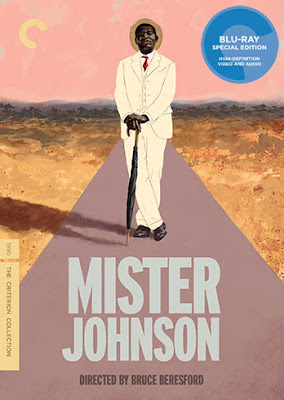 Video:
The film is presented in what Criterion describes as “the director's preferred aspect ratio of 1.85:1” which I gather differs from the original theatrical release (1.66:1 according to IMDB). The 1080p transfer is very rich in color with golden hues particularly radiant. The grain structure is subtle and consistent throughout, and it's hard to tell whether it's just a bit too subtle to present a sense of immersive depth. Image quality is sharp throughout. Overall, it's a very satisfying high-def transfer for a film that has not always been treated well either in theatrical or home distribution over the years.

Audio:
The LPCM 2.0 surround mix is crisp and does a fine job of presenting a fairly straightforward audio design that doesn't play around with a lot of effects. It's mostly centrally-located dialogue and music (by former New Wave icon Georges Delerue) and all sounds fine in a lossless mix. Subtitles for the non-English dialogue are a non-optional part of the print. Optional English subtitles for the English dialogue are also offered.

Extras:
Criterion has included a handful of newly record interviews, starting with director Bruce Beresford (15 min.) who discusses the few years he spent in Nigeria in the '60s as well as some of the challenges of shooting in the country. Producer Michael Fitzgerald (11 min.) elaborates further on the challenges while also discussing the film's genesis in his days working with John Huston and how he fought hard for Eziashi as the lead.

The interviews continue with the two main actors. Maynard Eziashi (12 min.) talks a bit about his early stage work and how he answered a casting ad for this film without having any idea it was going to be a “major motion picture.” Pierce Brosnan (9 min.) also shares some fond memories regarding the movie.

Aside from the interviews, the only other extra is a Theatrical Trailer (3 min.) in somewhat worn-out condition.

Final Thoughts:
I had come to think that “Breaker Morant” and “Tender Mercies” (1983) were the only Bruce Beresford film I really cared for, which made “Mister Johnson” a pleasant surprise. The extras aren't particularly substantive but the 45 minutes of interviews help fill in a few details. Maynard Eziashi is really exceptional in a movie that may not be a masterpiece, but is certainly worth a recommendation.
Posted by Christopher Long at 8:07 AM