NO NO: A DOCKUMENTARY (Radice, 2014)
Theatrical Release
Review by Christopher S. Long

(Today marks the 50th anniversary of one of baseball's most-celebrated no-hitters. Why does anyone still care about an early-June game between the Pirates and the woeful Padres? Read on and find out.)


Dock Ellis won 138 games in the major leagues, started an all-star game, and earned a World Series ring. But Dock Ellis will forever be known for pitching a no-hitter while (allegedly) tripping on LSD. As Ellis told and re-told the much-loved story, he couldn't even see the batters and just pitched to the reflective tape catcher Jerry May wore on his fingers. “High as a Georgia pine,” he walked eight and hit a batter. Trust Dock Ellis to pitch a no-hitter in his own style. 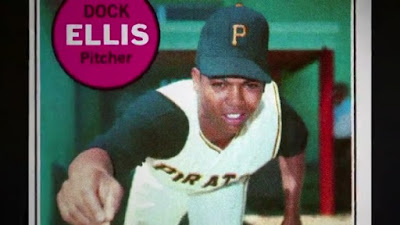 While “No No: A Dockumentary” (2014) shows us there is much more to Dock Ellis than just his June 12, 1970 gem against the Padres (yes, no-hitters pitched against the Padres still count officially) it still takes this cherished legend as its primary inspiration. It was neither the first nor the last time Dock (his given name, by the way) took the mound while under the influence of illegal substances.

Ellis's career (1968-1979) was a constant binge of LSD, vodka, and especially greenies, the amphetamines in widespread use in major-league baseball during the '60s and '70s. Ellis claims he would grab a fistful of pills from a bowl in the clubhouse, toss them in the air and take the ones that landed standing up... and then take the rest as needed. He enjoyed the night life too and was fortunate to find the perfect home with the party-animal Pirates headlined by Willie Stargell and Ellis's roommate and mentor Roberto Clemente. Fans of the team will enjoy the numerous interviews with Bucco stalwarts like Al Oliver (one of Dock's closest friends), Manny Sanguillen, Bruce Kison, and others.

First-time feature documentary director Jeff Radice plays the drug angle for the combination of awe and stoner humor that has usually accompanied the legend of Dock Ellis, but it's only fun and games until somebody gets hurt. The laughs stop quickly when we learn that Ellis choked his first wife Paula (she ditched him immediately) and later threatened to shoot his second wife, Austine, during a night-long ordeal as he raged after being released by the Pirates. According to the movie, Ellis took the second incident as a wake-up call, checked himself into rehab, and embarked on an unlikely post-playing career as an advocate for substance abuse treatment for professional athletes and a drug counselor in prisons.

Whether you buy the final act redemption story as neatly as presented here or not, Ellis emerges from the movie as a complex and thoughtful character. He loved to say and do outrageous things, but seldom did so without a calculated purpose. If there's a common thread to the controversies this self-described “angry black man” generated on a regular basis (I'll leave you to discover them in the movie in case you don't already know) it's that he didn't want anybody telling him what to do; not fans, not the press, and certainly not his employers. Ellis's defiant message to his teams was to watch how he played on the field and not to worry about anything else. 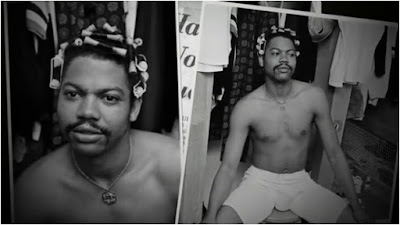 The documentary also suggests a sensitive, almost artistic side to Ellis. One of the stranger aspects about one of baseball's strangest careers is that Dock's biography would be written by future poet laureate Donald Hall who spotted something unique in the outspoken pitcher. He wasn't the only one. Jackie Robinson was inspired to write Ellis an appreciative letter in which he cheered him for standing up for his values. Dock tries to read the text of the letter, but can't make it to the end as he breaks up in tears.

Posted by Christopher Long at 10:00 AM