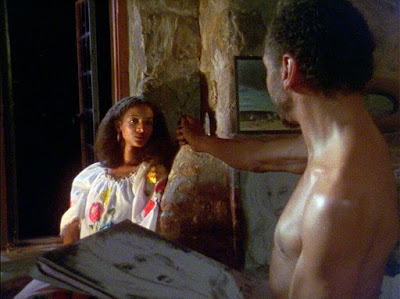 
(UPDATE 6/6/2020: The Criterion Channel has made several films by black filmmakers, along with a few other titles, available to stream for free. If you're looking for a place to start, I recommend "Losing Ground", available at the following link. Tip: The movie might not play on Chrome, but should work on Safari and Firefox and other browsers. I don't know how long it will be available for free, so don't let the opportunity slip by.)

Though the centerpiece of Kathleen Collins's “Losing Ground” (1982) is the fraught relationship between a wife and her husband, the scene that has stuck with me the most is the one where an aspiring student filmmaker named George (Gary Bollins) shouts directions to his camera operator. A nice, slow tilt, then a diagonal pan, now dolly back to a wide... “Did you catch that subtle mise-en-scene, mi amigo?”

Aside from the nifty feat of combining three languages in eight words, writer/director/producer Collins displays a wry sense of humor about the filmmaking process – the vanity, the insecurity, and the sheer pleasure of making decisions on set, absurdity and ambition shouldering each other aside. “Losing Ground” is one of the first feature films directed by an African-American woman and Collins had to work hard to get it made, but it sure seems like she had fun in the process. 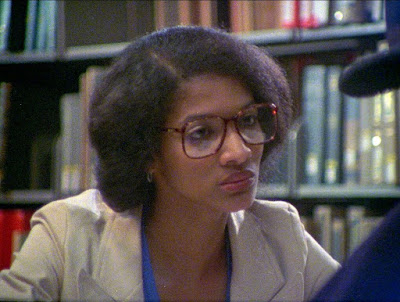 Fun is a challenge for Sara (Seret Scott), a terminally serious philosophy professor loosely inspired by Collins's experience as a film history and screenwriting teacher at City College of New York. Sara is perfectly comfortable lecturing on Sartre and Camus, but when she decides she needs to learn more about “ecstatic experiences” she follows the only route to wisdom she knows: a visit to the library to research it, like the Simpsons' “Itchy and Scratchy” staffer who wrote his “thesis on life experience.”

Her free-spirited artist husband Victor (Bill Gunn, the filmmaker of “Ganja and Hess” fame) would be the perfect counterbalance for her if only he could actually acknowledge anyone's experience (ecstatic or otherwise) other than his own. Victor has his moments of gentle humor, celebrating a museum sale by stating, “I'm a genuine success... a genuine, black success,” but his incurable narcissism imperils their relationship. For him, inspiration trumps reason, and he lets Sara know it: “What's the matter? Hegel and the boys let you down?”

Professor Sara looks so tiny as she sits in her massive chair in her similarly massive office (Collins has a thing for interiors with high ceilings), but she asserts her presence with greater authority, in fits and starts, as the story unfolds. Victor drags her along to a retreat in upstate New York, but when said retreat turns out to be another excuse for Victor to fool around with one of his artistic “subjects” (Maritza Rivera) Sara drops her books on Gnosticism and pursues her research on ecstasy by agreeing to act in George's film, a decision which thrills the budding auteur, one of many students besotted by Sara. 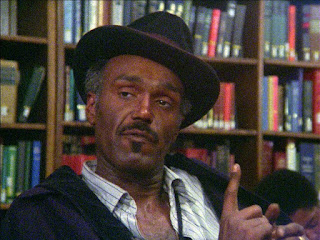 This serves the dual function of infuriating Victor (he's the only one allowed to pursue his muse) and introducing her to the mysterious Duke, who is just cool enough to wear a cape and hat without seeming like a hipster poser. Duke is played by the great Duane Jones, perhaps best known as the star of George Romero's genre-defining “Night of the Living Dead” (1968) and he steals most of his scenes. Director George (the student, not Romero) provides another laugh line when he shouts to his stars in the middle of a long take, “Sorry I didn't prepare you for this, but could you kiss? Really kiss?”

They do, and it's a crucial step in Sara's empowerment, enabling her to stand up to Victor when he makes a fool of himself at a party, and paving the road to an ending that I'll admit to feeling ambivalent about. Let me watch it again and maybe I'll have a better take.

“Losing Ground” screened just one time in New York and barely received any press coverage, though it would accrue a growing army of admirers at college screenings and other specialty venues and the occasional TV or cable broadcast. Collins continued teaching, but never directed another film. Shortly before production on “Losing Ground” she discovered she had breast cancer, and died from it in 1988 at the age of 46.

Though her film never received anything resembling a proper release, “Losing Ground” touched many viewers deeply, and neither Collins nor her film would be forgotten. When Duart Labs begin divesting itself of its film inventory about ten years ago, Collins's daughter Nina rescued the negatives and set out on a path that eventually brought her to the right place, Milestone Films. And now Milestone has helped to bring “Losing Ground” to more viewers than ever in this magnificent and comprehensive two-volume Blu-ray release. Video:
The film is presented in its original 1.33:1 aspect ratio. This high-def restoration shows a few minor flecks, mostly visible during the title sequences, but the overall quality is excellent with a thick grain structure visible throughout. Another knockout effort from Milestone.

Audio:
The lossless audio sounds crisp and clear throughout. There are moments when the dialogue sounds a bit hollow, but I suspect that's from the original audio source, perhaps from some dubbing. No problems worth noting here. Optional English subtitles support the audio.

Extras:
Reviewing a Milestone release is invariably a pleasure; it is also a commitment to a full 40-hour work week. They have been typically exhaustive in loading this 2-disc Blu-ray release with extras.

Disc One includes the film and a Theatrical Trailer. The film is accompanied by a commentary track by Lamonda Horton-Stallings, a professor of women's studies and literature at the University of Maryland College Park, and Terri Francis, a film scholar at Indiana University. They speak about their experiences first discovering Collins's film while also providing scene-by-scene analysis. They strike a great balance in providing expert insight and expressing their personal enthusiasm for the film and for Collins.

Disc Two, as is standard for most Milestone multi-disc products, could easily be its own stand-alone release. 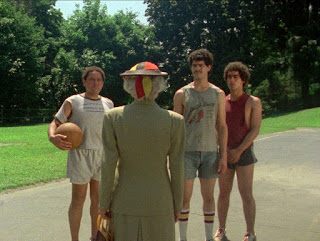 “The Cruz Brothers and Miss Malloy” (1980, 49 min.) is Kathleen Collins's first directorial effort, working in collaboration with cinematographer Ronald K. Gray, also a crucial creative partner and cinematographer on “Losing Ground.” Collins was eager to parlay her experience in film editing, teaching, and writing into a directorial gig, but decided it would be better in her first turn behind the camera to adapt someone else's writing instead of her own. So she worked loosely from “The Cruz Chronicles” by Henry H. Roth, also co-adapting the script with Roth and Jo Tavener. I was wowed by the opening passages of this lyrical film imbued with a touch of magical realism. The oldest of the three Puerto Rican Cruz brothers, Victor (Randy Ruiz), is also the only one who can speak to his Poppa, who has long since passed on but still drops by to offer advice as a free-floating spirit represented POV-style with a similarly free-floating camera and voice-over by Ernesto Gonzalez.

Collins and Gray capture some elegant imagery of Victor, Jose (Lionel Pina), and Felipe (Jose Machado) palling around during mostly structureless days, playing along a bridge or shooting hoops. I found the film somewhat less compelling once Miss Malloy (Sylvia Field, formerly Mrs. Wilson of Dennis the Menace) enters the picture, hiring the brothers to rehabilitate her crumbling estate so she can hold one more ball before she dies, shades of Satyajit Ray's “The Music Room” perhaps. Field can be over the top and a bit stilted at times, delivering random lines like, “I'm looking for my life. Where is it?” I wasn't so crazy about the ending either. However, there are warm, vibrant moments and a good dose of humor, especially in poor Felipe's constant urge to quit and run away whenever things at Miss Malloy's house turn a bit too creepy... or if his ginger ale has too much ice.

“Cruz Brothers” is also accompanied by a commentary track, though not the typical one. This is actually an audio recording from a 1980 public screening and Q&A session in which Collins discusses the limited production (here she says it was made for $7,000, though $5,000 is the figure mentioned elsewhere) as well as her appreciation of directors like Eric Rohmer and her fondness for long takes and films that don't guide audience reactions too heavily. Author Henry H. Roth also chimes in around the 35-minute mark. The audio ends about five minutes before the film does.

“Transmagnifican Dambamuality” (1976, 7 min.) is a short film directed and shot by Ronald K. Gray. He describes this “Quiet, Domestic Drama” as a remembrance of his family life, especially his younger brother. It concerns a typical family going through their morning rituals, with mom alternately being exasperated with her son for wasting his time in his room to beaming proudly at him when he plays the piano beautifully. The film's defining feature is a comedic soundtrack with overwrought effects (a knife on a cutting board produces concussive explosions) that turns touchingly realistic at the end. I liked it a lot.

Of course, we haven't even gotten to the interviews yet. Milestone's first interview is a new one with Ronald K. Gray (46 min.) that covers just about all the bases, from Gray's early life and education to first meeting Kathleen Collins at City College of New York to their professional collaboration. Like all of the interview subjects, he expresses his astonishment at learning about Collins's cancer as she kept it a closely-guarded secret.

Another similarly expansive interview (40 min.) with the apparently ageless lead actress Seret Scott follows. She met Collins through a mutual friend, actor Gilbert Moses, and through their civil rights activism with SNCC. She quickly came to consider Collins both a mentor and a close friend, and notes that Collins almost always wrote a part with Scott in mind in each of her plays. She doesn't mention “Losing Ground” until past the halfway mark of the interview, but has plenty to say, especially about her co-stars about whom she speaks glowingly.

Nina Lorez Collins, Kathleen's daughter, also talks (26 min.) about life with mom and her memories of the various films; often cast and crew would not just be co-workers, but would be living in the Collins household during the shoots.

Fortunately, Milestone was able to dig up a video interview with Collins, conducted by Phyllis B. Klatman as part of a college-based interview program, and provided here courtesy of Indiana University Black Film Archive. This 23-minute interview gives Collins plenty of time to talk about her early career, including making a living as a film editor before becoming a teacher, as well as her teaching philosophy which includes familiarizing students with the earliest films so they can build from the ground up.

But aside from all that, there's really not much on the disc.

Final Thoughts:
“Losing Ground” offers so many other small pleasures I didn't even get to: the unabashedly intellectual exchanges that leap from French existentialism to early Christian mysticism, the student whose ill-considered idea of a great pick-up line is to brag about reading “that book on Genet,” and the wonderful performance of Billie Allen as Sara's mother. Thanks to this splendid and comprehensive release from Milestone, you now have the chance to discover them all and, most importantly, to discover (or re-discover) the work of Kathleen Collins.
Posted by Christopher Long at 10:12 AM