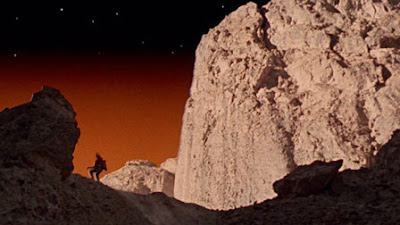 (With "The Martian" dominating the U.S. box office you may have heard a few references to this earlier movie about an astronaut stranded on the Red Planet. I'll just say I like this gutsy B-movie a whole lot better than the slick Matt Damon sitcom and leave it at that. This review was written for the 2007 DVD release by Criterion, but Criterion re-released the whole package in 2011 on Blu-ray so you probably want to consider that before the DVD.)


The opening sequences of the B-movie sci-fi classic “Robinson Crusoe on Mars” (1964) toy cruelly with our expectations. First, we get Adam West, and not just that, but Adam West as an astronaut. Adam West as Batman as an astronaut (Batstronaut!) would be even better, but let’s not get picky. Adam West is one of the most enjoyable actors of all-time, and we all know that he would never be in a bad movie. This could be better than we thought.

But then we hit our first major bump, literally, as the space ship is knocked out of its flight path by a meteor and forced to plan for a crash-landing on Mars. Colonel Dan (West) radios back to ground control where a Very Important Scientist warns him: “Do not dissemble space vehicle until all other procedures have been tried.” I guess the ship doesn’t like to be lied to. HAL 9000 got pretty pissed when Dave tried to bullshit him, so maybe it makes sense.

Then the news becomes grimmer still: Adam West isn’t even going to be our main character. I don't want to get into details; it's too painful to think about, but we're gonna spend most of our time with the other guy in the crew, Colonel Kit Draper. How the hell do you give Batman second billing? He spent all that time making his super-cool utility belt, and now you’re just going to shunt him off screen in favor of some stiff who never even played Batman?

At least that stiff is Paul Mantee, who actually delivers a pretty good performance as Draper, and who did appear twice as one of Catwoman’s henchmen on “Batman” so maybe that qualified him for the mission. After Draper crash-lands on Mars, he quickly sets to securing the survival basics: food, shelter, water. He’s obviously a well-trained military man, or at least an over eager Boy Scout, because he gets the job done pretty quickly. It helps that the atmosphere on Mars is just thick enough for a man to be able to breathe for about ten minutes without supplemental oxygen. As boring as some of this may sound, these scenes are rather well-conceived and even kind of exciting. Pretty soon a rather surprising thought occurs to us: This might actually be a good movie. 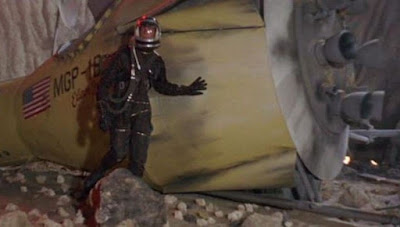 “Robinson Crusoe on Mars” also turns out to be a surprisingly bold film. After the crash-landing, Draper spends nearly a half hour of screen time entirely alone, hardly saying anything other than “Hey!” as he dodges a fireball (you know, those famous Martian fireballs) except when he speaks into his recorder to leave a record for any future crews who discover his body. Over the next half hour Draper finds himself a companion, Mona the monkey, the only other surviving member of the crew. For an entire hour then, Paul Mantee finds himself performing a one-man stage act. The plot focuses on his physical ordeals but also stresses his spiritual journey, rather difficult to pull off when you’ve only got a recorder and a monkey for company, but Mantee does yeoman’s work here. The spiritual theme begins subtly but grows in significance as time passes. Draper clearly believes he has survived only through divine agency; a quiet “thank you” when he discovers a surprising oxygen source is the first tip off to Draper’s true beliefs.

Draper marks off his time on Mars on a slate, days melting into months, and even though he never expects to be rescued he still keeps motivated. Mona helps out. A resourceful little scavenger, she discovers water and edible food on this barren Eden, and sits down for dinner with Draper every night. It’s really quite remarkable to see a B-movie stay so long with just one (human) character on-screen, violating just about every rule of screenwriting and entertainment. What, no love interest? And, no, Mona doesn’t count. They’re just friends.

Unfortunately, the final forty minutes or so of the film meanders back into familiar genre territory, undermining some of the great work accomplished during Draper’s months of isolation. Singer/future Klingon soldier Victor Lundin shows up as an escaped alien slave, Draper’s very own Friday who guides him into a battle with alien overlords and a flight through those legendary martian canals.

This part of the film isn’t terrible, just a mild disappointment after such commitment to the previous one-man set-up. The highlights are the menacing space ships that look suspiciously like the Martian invaders from “War of the Worlds” (1953), which is no coincidence since director and special effects wizard Byron Haskin helmed both of these science-fiction classics. It’s amazing how cool the effects still look today: the ships just zip into place super-fast, and then zip away just as quickly. Not all the effects in “Robinson Crusoe” wear as well: the Earth explorer’s creaky orbit is not one of Haskin’s finer efforts, but that’s only a minor complaint.

There are only three actors in the case of “Robinson Crusoe on Mars,” plus Mona the Monkey (played by Barney the Wooly Monkey), and minimal dialogue for good portions of the film. This not only provides a convenient way to reduce the budget, it also yields a surprisingly focused, suspenseful, and downright audacious film, at least until the ending. “Robinson Crusoe on Mars” is definitely not your typical B-movie. 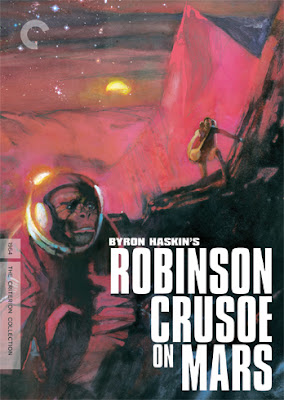 Video:
The film is presented in its original 2.35:1 aspect ratio. Ah, glorious Techniscope, Cinemascope’s slightly grubbier cousin. Techniscope usually looks a little grainier than Cinemascope which might be seen by some as a weakness (Cinemascope was certainly the more popular format), but works to the advantage of many films that benefit from that slightly grittier look. The digitally restored transfer by Criterion might look a little “dirtier” than some of their usual efforts, but it’s really supposed to. There are a few dings and scratches evident from the source print as well, but they don’t detract from the look at all. Yet another excellent job by Criterion.

Extras:
The film is accompanied by a feature-length commentary by screenwriter Ib Melchior, and cast members; the track also mixes in excerpts from a 1979 interview with Byron Haskin.

The rest of the extras are included in the “Survival Kit.”

“Destinaton: Mars” is a short (19 min.) documentary detailing the ways in which “Robinson Crusoe on Mars” was accurate according to 1964 information regarding the planet Mars. Space historian Michael Lennick asserts that the film was surprisingly sorta-kinda-vaguely accurate for its time. Granted, there are no fireballs on Mars, but at the time scientists believe the atmosphere might support human respiration for brief periods of time, as featured in the film. I enjoyed this feature quite a bit.

A music video of the Victor Lundin song “Robinson Crusoe on Mars” is also included and is surprisingly sweet; think “Cat’s in the Cradle” except about “Robinson Crusoe on Mars.” The DVD also offers a slideshow of promotional material or the film and a downloadable PDF file of excerpts from Ib Melchior’s original screenplay, one much more of the Bug Eyed Monster variety.

The wonderful cover art for the DVD is by the great comic book artist Bill Sienkiewicz.

Final Thoughts:
Criterion has diversified its collection with several recent B-movie releases: “Equinox,” the “Monsters and Madmen” boxed set, and now “Robinson Crusoe on Mars.” In each, the studio provided a justification for including each film in the prestigious Collection. “Equinox” marked the earliest work of special effects gurus Dennis Murren and David Allen; “Monsters and Madmen” collected four films produced by Richard and Alex Gordon; “Robinson Crusoe on Mars” is directed by Byron Haskin of “War of the Worlds” fame. Of the films, “Robinson Crusoe” is easily my favorite, no masterpiece, but an entertaining and daring film which would make a worthy entry in the Criterion Collection even without its auteur stripes.

My only real complaint: needed more Adam West. But that holds true for most movies.
Posted by Christopher Long at 9:59 AM