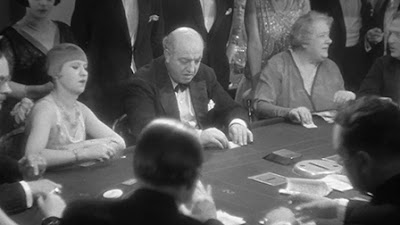 
If director Julien Duvivier's star dimmed in the post-war years, the 1930s witnessed him a the height of his prowess. Few directors would make the transition from silent cinema to talkies as seamlessly as Duvivier even if, like most directors, he made the change only with great reluctance.

Following a successful run of more than twenty silent pictures, Duvivier's talkie debut was an absolute stunner. “David Golder” (1930) isn't exactly a cheerful pick-me-up. The film's opening montage film shows a shouting crowd; characters super-imposed over the masses warn us that the film's title character is both a “scoundrel” and “a great man.” The paunchy, aging Golder (Harry Baur, who stars in all four films on this Eclipse set) backs up both claims in a difficult financial negotiation set in a smoky room lit mostly by the glare reflecting off sweaty, balding foreheads. This is a business man who means business. 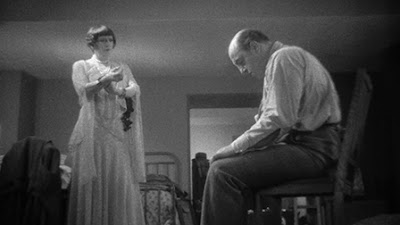 It's reasonable to be concerned about the ultimate purpose of a film centered on a greedy Jewish banker and his equally greedy wife and daughter. But the film, based on the debut novel of Russian-born Jewish writer Irene Nemirovsky, paints a vivid portrait of wealthy European Jews at the onset of the worldwide economic depression, filled with the intrigues and scheming of any insular group of power brokers, and any family corrupted by easy money.

In a truly harrowing sequence, Golder, recovering from a recent heart attack, argues with his wife Gloria (Paule Andral) while bed-ridden. After Gloria accuses him of being “the same little Jew” who sold scraps, he almost literally chokes her to death by grabbing her extravagantly jeweled necklace. He strikes another damaging blow when he reminds Gloria that she once was known as Havke. It's one of the most bilious displays I can recall seeing in any film, genuine, seething hatred from two fully invested actors.

Duvivier and his team of cinematographers balance grotesque imagery (David wanders in on a sweaty obese man toweling himself off while wearing only underpants) with many immaculate compositions, including a remarkable shot that allows separate actions to unfold in different rooms, each cordoned off in opposite halves of the frame. Duvivier is a big fan of parallel action; when not peering into two rooms at once, he cuts back and forth aggressively between simultaneous sequences, one of which ends with a suicide on a night-time street. The camera also lingers on the faces of impassive butlers while their “masters” discuss their various schemes, showing that Duvivier had no problems taking advantage of the new opportunities afforded by sound technology. 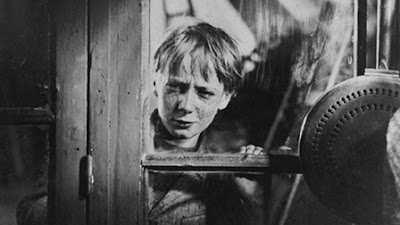 “David Golder” is so relentlessly gloomy that the next film in the set feels positively upbeat by comparison. After all the title character of “Poil De Carotte” (“Carrot Top”, 1932) is just a ten-year-old boy who contemplates suicide due to the cruelty of his mother and the benign neglect of his father (Baur). Carrot Top (Robert Lynen) does his best to endure a family situation in which he feels so disenfranchised he refers to his parents as Mr. and Mrs. Lepic. Mother openly despises him, perhaps because he arrived late in life as an unexpected gift, while doting on her feckless oldest son. Father is primarily concerned with escaping his wife and running for mayor of their small town.

The film was a huge commercial success for Duvivier in no small part due to the plucky performance delivered by young Lynen. Carrot Top has a rich imagination which both allows him to survive and also produces frightening manifestations such as the circle of phantoms who swirl about him as he makes a nighttime dash to feed the livestock. He is, unfortunately, too perceptive to deny his situation and his prayers for mother to “forget I exist” give way to voices in his head (also filmed as ghostly apparitions) urging him to end his problems for good. A last-minute reconciliation between father and son comes as an immense relief even if there's little reason to believe the boy will live happily ever after. 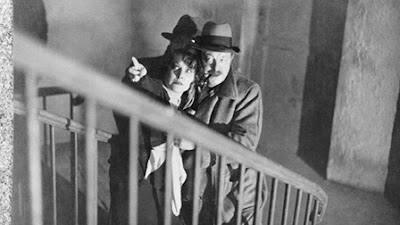 “La Tete D'un Homme” (1933) sees Duvivier try his hand at the detective story, this time casting Baur as Georges Simenon's world-famous Inspector Maigret. Duvivier and co-screenwriters Louis Delapree and Pierre Calmann remove all suspense from the story, providing viewers access to the planning and execution of the murder of an elderly American widow that kicks off the action. The tension builds slowly in the unraveling, first when a hapless schmuck of a thief (Alexandre Rignault, whose giant hatchet face pegs him as a born patsy) is framed for the crime and later as the supernaturally patient Maigret zeroes in on the real killer. Rignault's flight into the nighttime Paris is a sequence of moody perfection capped off by a thin, elongated shadow seemingly copied directly from “Nosferatu.”

Since the crime itself is a bit of a bore, the movie wouldn't work without an intriguing killer. Fortunately the film delivers in the form of the tormented Czech medical student Radek, a character seemingly plucked from a Dostoevsky novel. Thinking himself superior and the unfair victim of a terminal malady, he exhibits little guilt, preferring to taunt the police instead. Russian import Valery Inkijinoff adds another indelible face to the film's rogue gallery, his remarkably expressive features practically an open window to a shriveled soul. Baur is almost overshadowed in the process, but turns in a fine performance as a calm, implacable investigator whose secret weapon is the ability to listen. 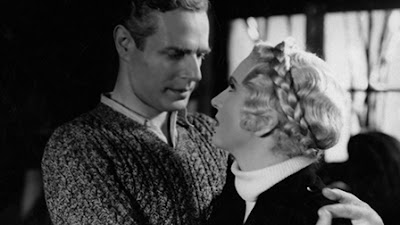 The final film in the set provides at least intermittent respite from the misery of the first three entries. “Un Carnet Du Bal” (“Dance Card”, 1937) is an episodic feature that may play to some viewers like an early Max Ophuls film and is surely the most elegant feature in the set. Christine (Marie Bell) is recently widowed and hopes to alleviate her grief, or at least come to terms with it, by reconnecting with the male suitors who danced with her at her coming-out ball on her 16th birthday, nearly two decades ago.

Her adventures take her from Italy to France and through a varied series of encounters that prove that the past is irretrievable and the future entirely unforeseeable. Many of the men have fallen on hard times, a few because Christine did not entertain their advances back at the ball. Unsurprisingly, Harry Baur delivers the most memorable performance. His disappointment with Christine's rejection, as well as another great personal loss, drove him to the priesthood where he feels he does great good, but not enough to overcome his lingering heartache. In another vivid encounter, she meets with a former lover whose life has taken him from lawyer to petty crook. The two hours he spends talking with her may be the last he spends as a free man, but the opportunity to see himself through her eyes might make it all bearable.

Other men have adjusted to post-Christine life more happily, including a heroic but lonely mountain guide, a small-town mayor about to remarry, and an ebullient hairdresser with a penchant for dopey card tricks. Christine's travels are initiated by her memory of the ball, rendered by Duvivier and team as a carefully choreographed phantasmagoria reminiscent of Carrot Top's swirling ghosts, and her journey inevitably takes her back to the beginning, to another ball and then back home to the Italian villa she had shared with her husband. “Un Carnet Du Bal” was yet another big hit for Duvivier, released the same year as perhaps his best-remember film today, “Pepe Le Moko.”

The success of “Pepe” and, to a lesser degree, “Carnet Du Bal” brought Duvivier to Hollywood before he returned to France, with a few detours to the UK, after the war. While he still directed some fine films during the post-war period, his critical reputation would suffer once the “Cahiers Du Cinema” critics lumped him unfairly in with their despised purveyors of “the tradition of quality.” Duvivier has since been embraced once again by critics, but still remains eclipsed by the shadows of his contemporary stars like Marcel Carne and Jean Renoir, the latter of whom rated Duvivier as one of the greatest filmmakers of any era. 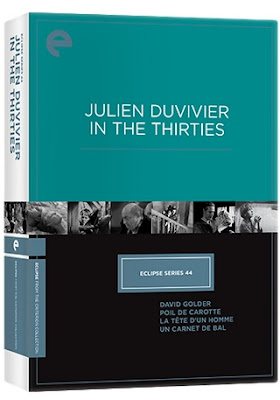 Video:
All four films are shot in black-and-white. “David Golder” is presented in its original 1.19:1 aspect ratio, a ratio used only in the first few years of sound film. The other three films are presented in their original 1.33:1 aspect ratios. As usual with Eclipse releases, the films have not been restored for this release and they vary in quality. “La Tete D'Un Homme” shows the most damage with several short shots badly warped around the edges, but most of it still looks fine. “Poil De Carotte” probably looks the best. Overall, while the film's all show some instances of damage with the occasional skipped frame evident, they are still sharp enough to show a pleasing grain and a satisfying black-and-white contrast. Considering the age of the films, these “no frills” restorations look quite solid.

Each film is on its own DVD housed in a separate slim keep case. All four slim cases tuck into the cardboard packaging for the set.

Audio:
All four films are presented in Dolby Digital Mono sound mixes. Voices sometimes sound a little tinny and the music a bit warbly, but overall the quality is acceptable if far from spectacular. Optional English subtitles support the French audio.

Extras:
As with most Eclipse releases, no extras are provided aside from liner notes on each of the four discs by Michael Koresky who, as usual, does a fabulous job.

Final Thoughts:
I think “David Golder” is a flat-out masterpiece and “Un Carnet Du Bal” is so rich I expect to enjoy it even more on repeat viewings; the other two films are damned fine as well. Yet as marvelous as the movies in this four-disc Eclipse set are, they also provide a sobering reminder of the tragedy of history. Thanks to the success of “Poil De Carotte,” Robert Lynen became one of France's pre-eminent child stars in the '30s. By the age of 20, he joined the French Resistance and was executed by the Nazis in 1944. The great Harry Baur, nearly omnipresent in this set, appeared in several other films for Duvivier, enjoying his own stardom. Baur would also die at the hands of the Nazis in 1943. Novelist Irene Nemirovsky was killed in Auschwitz in 1942.

Posted by Christopher Long at 9:35 PM