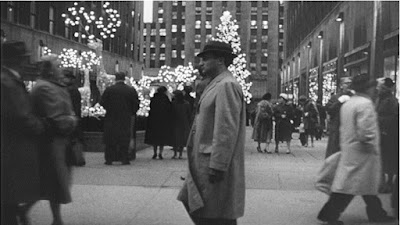 (Looking for something a little different to watch this Christmas season? Try this grim holiday treat from Allen Baron.)


Not too many films begin with a point-of-view shot of the protagonist’s birth, but that’s only one of many unusual things about Allen Baron’s “Blast of Silence” (1961).

The opening shot of Allen Baron's “Blast of Silence” (1961) depicts two births. A distant dot of light hovers in a pool of inky blackness as the narrator speaks: “Remembering out of the black silence, you were born in pain.” A woman screams, a baby cries. The second-person narration, written by Waldo Salt and delivered by an uncredited Lionel Stander (both blacklisted at the time), continues, sharing the soundtrack with the mounting rumble of a train. The distant light grows steadily, tracks become visible, and as the train bursts out of the tunnel, our protagonist is “born”again, entering the story as an adult who now keeps the screams inside.

That protagonist is a plain vanilla hit man named Frankie Bono (played by director Barron) though the narrator, constantly haranguing poor Frankie in that gravelly Lionel Stander voice, probably deserves co-billing. Frankie’s riding the train into New York for his next job, a straightforward hit on a mid-level mobster as unremarkable as Frankie. It's just another job and Frankie has no interest in why he's been asked to do it.

The story, however, is not really about the hit at all, but how Frankie kills time all alone in the big city, where most New Yorkers are busily preparing for Christmas, while waiting for an opportune moment to complete his job. Through the narrator, we can guess that Frankie has a rich and tormented internal life, but he seems sadly unaware of it. For Frankie, life’s just a whole lot of waiting and trying your best not to think about it. “It” being anything at all. 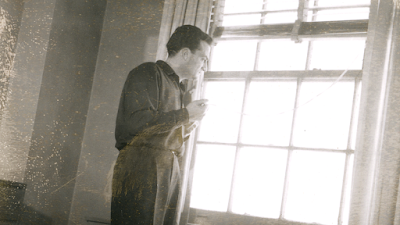 Arriving three years after Orson Welles’s “Touch of Evil,” Baron’s film is either a straggler at the end of the classic film noir period, or one of the earlier neo-noirs. Film noir was a term applied many years after the noir cycle began, so it’s unsurprising that critics can’t agree on the precise timing of each of the noir cycles or even how to define the genre. Like most noirs, the film’s universe is one that is severed from any sense of a higher being (at least a benevolent one), a world covered by only a thin veneer of civilization where even the slightest mistake, a stumble or a wrong turn, leads inevitably to tragedy. Frankie was “born in pain” and he lives in pain, always trying to drown out the scream that heralded his entry into this cruel world.

For Frankie, the wrong turn comes when he picks the wrong place to have dinner; an old friend meets him and insists he attend a Christmas party. At the party, Frankie meets his old flame Lorrie (Molly McCarthy). This unfortunate encounter stirs Frankie from his life-long stupor, and prompts him to wonder, for the first time as an adult, if there’s a way to make meaning out of this meaningless world. Sorry, Frankie, you’re in a film noir.

Allen Baron was a graphic designer (he was a comic book artist for a while) who shot his first feature film entirely on location, then an unusual thing to do though hardly unprecedented. Baron scraped together financing in various stages and shot the film piece-meal over two years. His friend Peter Falk was originally slated for the title role but got a better offer (i.e. one that paid) so Baron was forced to step into the role. Baron appears ill-suited to be in front of the camera, which works just fine since Frankie is ill-suited to be anywhere. Frankie’s very birth was a mistake, and his continued existence only compounds the error. He’s a man out of place in every place he goes.

The film takes great advantage of its New York locations as well as the contrast between Frankie’s isolation and the communal nature of the Christmas season. Frankie walks past brightly lit Christmas trees and wanders through crowds of shoppers, severed from any connection to the people or to the holiday season. No joy to his world. “Blast of Silence” could just as easily have been titled with a different oxymoron, “Alone in a Crowd.”

Another highlight of the film is the performance by Larry Tucker as the sleazy, obese gun dealer Big Ralph. Tucker’s massive enough to have his own gravity well, yet so mousy and insubstantial he could sneak up on you without warning. Tucker later focused on a writing career (he was nominated for an Oscar as the co-writer of “Bob & Carol & Ted & Alice”) but he turned in one more memorable role, as Pagliacci in Sam Fuller’s madhouse flick “Shock Corridor.”

No matter how many noirs you’ve watched, I guarantee you’ve never seen anything quite like this one. 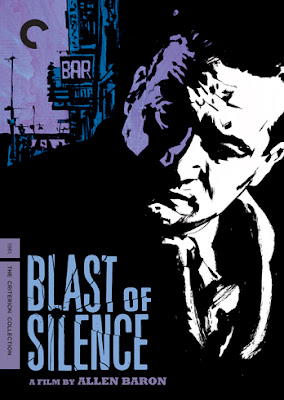 Video:
The film is presented in its original 1.33:1 full-screen aspect ratio. The image is not picture-boxed. The black-and-white photography looks sharp and beautiful in this restored transfer. Some evidence of wear and tear from the source is still visible, but it’s not even the slightest bit of a distraction.

Audio:
The DVD is presented in Dolby Digital Mono. Optional English subtitles support the English audio. Stander's pervasive narration comes through loud and clear and the sound design has an appropriately hollow quality to it.

Extras:
“Requiem for a Killer” is a 60-minute documentary featuring Baron as he revisits the filming locations of “Blast of Silence.” This feature is a 2006 assemblage by film historian Robert Fischer who uses footage from a 1990 West German TV documentary about Baron combined with new interview material.

“Locations Revisited” is a series of still photos that, well, revisit NYC locations. It’s a bit of a repeat of the material in “Requiem.”

The disc also includes a fairly extensive collection of on-set Polaroids (about 40 in all) with captions from Baron’s own descriptions written on the back of the photos.

Final Thoughts:
After a promising film debut, Allen Baron went on to a career in television, directing episodes of a host of well-known 60s and 70s shows, including “Kolchak: The Night Stalker,” “The Dukes of Hazzard,” and even “Charlie’s Angels.” That only makes “Blast of Silence” even more of an anomaly, a bizarre one-off that is quintessentially noir while not particularly resembling many other noirs. It’s not a masterpiece, but it’s damned interesting and even an under-the-radar Christmas film if you're not too wedded to the “Merry” part of “Merry Christmas.”
Posted by Christopher Long at 9:26 PM