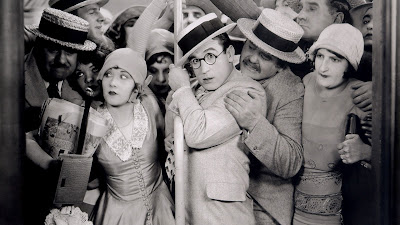 
This iteration of Harold Lloyd's trademark Glasses Character earns his nickname Speedy (also the real Lloyd's nickname). A bundle of fast-twitch nerves, he races from one self-generated crisis to the next, leaving a trail of wreckage in his well-meaning wake.

This makes New York City, the town “where everyone's in a hurry,” the perfect home for Speedy. But while Lloyd's signature character was usually eager to fit in, whether in college (“The Freshman”) or at work (“Safety Last!”), he earned sympathy from the audience by situating himself proudly as an outsider. The young go-getting Speedy (also identified as Harold Swift on a series of traffic tickets scrawled by an exasperated policeman) actually makes his home in a quieter part of the city (round about Greenwich Village) where the more leisurely pace of life is embodied by Pop Dillon (Bert Woodruff) who operates the last remaining horse-drawn trolley car in New York.

When Pop's business is threatened by a corrupt rail tycoon who intends to acquire the old man's track by any means necessary, Speedy rushes to assist Pop. No doubt the young man is motivated by his love for Pop's charming granddaughter Jane (Ann Christy), but he also has the kind of big heart that drives him irresistibly to the cause of the underdog; Speedy will also ally with a group of grizzled Civil War veterans in a sprawling battle against the cheap hoodlums seeking to sink Pop's business, the vastly superior prequel to “Gangs of New York.”

“Speedy” (1928) was released at the tail end of a remarkable box-office run by Lloyd that rivaled or exceeded Charlie Chaplin's and would also be Lloyd's final silent feature – silent cinema itself would be all but finished a year later. His Glasses character was well-established by then, but the most noticeable change this time was a major shift in setting. Keen to move away from overly-familiar Southern California locations, Lloyd briefly considered shooting in Europe, then settled on filming on location in New York despite producer Hal Roach warning him of the inevitable logistical nightmares.

Lloyd needed to be pretty speedy on set. As one of the most recognizable people in America, he had to be ready to jump right into action in Greenwich Village or Times Square before crowds figured out what was happening. In some scenes, Lloyd's team deftly incorporated the throngs of onlookers into the action. Many sequences, both outdoor and indoor, were still filmed on studio sets back west, but the movie's shots of Coney Island, including a breath-taking vista of its glittering night-time lights, still thrill today. Some of the Coney Island rides were shot on location, others in studio, and all look so outrageously dangerous they speak of a less-litigious era. And that part where Lloyd flips himself the bird in the funhouse mirror remains the stuff of legend.

Even if you're not a city buff, “Speedy” offers yet another distinct thrill. Speedy is a die-hard baseball fan who requires that his numerous short-term jobs (he always finds another one on Monday) be within “phoning distance” of Yankee Stadium. In one of the film's quietest but niftiest gags, Speedy, working as a soda jerk, relays phone updates of the Yankees score to the kitchen staff by arranging bagels and pretzels in a display case to mimic the inning-by-inning scores. Zeroes are easy, threes a bit trickier. 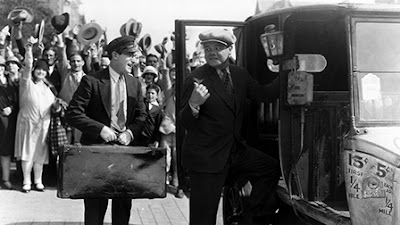 Speedy later gets works as a taxi driver, a gig that he only holds onto for a few hours because that's just the way he rolls, but Lloyd finds the time to pick up one of the few fares in the country who was more famous than him. In the midst of his legendary 1927 season, Babe Ruth appears as himself, first handing out signed memorabilia to kids and then as an unwitting victim locked in the back seat of Speedy's taxi. Rattled and shaken by the frantic ride, Ruth proves to have an even bigger heart than the film's star and invites Speedy in to watch the game. Unsurprisingly, Speedy doesn't stay seated for more than a few minutes before unleashing chaos, but it's the thought that counts, Babe.

Where “Safety Last!” featured one of cinema's most precise and awe-inspiring displays of virtuosity, “Speedy” settles more for madcap hijinks, sheer kinetic frenzy. The rumble between the aging Civil War vets and young toughs is a mess of grappling bodies livened by a few specific stunts, and the framing story about Pop's horsecar is put on hold for long stretches in favor of what's really important: racing furiously from one gag (or one vehicle) to the next with minimal concern for narrative structure.

Which is exactly as it should be when you've got a performer as winning and as relentless as Harold Lloyd, a star who connected with audiences like few others before or since. Of course, that means that Speedy ultimately saves Pop and gets the girl, and if you consider that a spoiler, welcome to your first movie. You've picked a great one to start with! 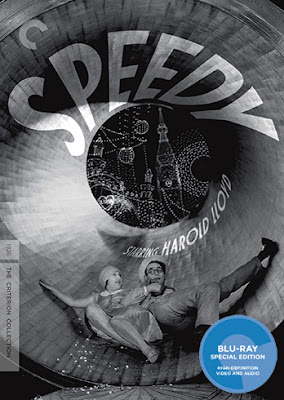 Video:
The film is presented in its original 1.33:1 aspect ratio. The film was restored by Digital Film Restore in Burbank, CA and “this new digital transfer was created in 4K resolution... from a safety fine-grain master positive deposited at the UCLA Film & Television Archive by the Harold Lloyd estate.” Some scenes were scanned from the archive's preservation negative.

In high-def, this restored transfer looks fabulous with strong black-and-white contrast and a thick grain structure that provides a sense of texture and depth, which is all a way of saying this looks very filmic. There are some minor instances of damage and a few skipped frames, but that can all be forgiven for the opportunity to this 1928 film in such a marvelous version.

Audio:
The silent film is accompanied by a 1992 score by composer Carl Davis. The lively score has been synchronized and restored for this release and is presented in uncompressed stereo. It sounds great throughout, rich and resonant. Hey, how long do you expect an Audio section for a silent film to be?

Extras:
Criterion has provided an extensive and varied collection of extras for this Blu-ray release.

The film is accompanied by a new commentary track featuring Bruce Goldstein, director of repertory programming at the New York Film Forum and Scott McGee, director of program production at Turner Classic Movies.

Goldstein returns as director and onscreen narrator of “In The Footsteps of 'Speedy'” (2015, 31 min.) This short documentary discusses the many New York locations featured in the film along with background about the production and some great still photos. Goldstein is equally enthusiastic about the movie and about New York and offers plenty of remarkably detailed analysis of the city locations. This will be a treat for fans of urban history.

The bigger treat for a baseball junky like me is the lengthy (40 min.) Babe Ruth feature included on this disc. David Filipi, director of film and video at the Wexner Center for the Arts at Ohio State University has curated a program of archival film clips featuring the Babe. In this feature, he provides on-screen introductions for the remarkable variety of clips included. They're all great, but some of the highlights include seeing Babe Ruth playing golf with pitcher Bob Shawkey, umpire Bill Klem and New York Governor Al Smith; football coach Knute Rockne visiting Yankee Stadium to see Ruth, Lou Gehrig and Yankee manager Miller Huggins, and Babe conducting a 1940 hitting clinic for boys at Yankee Stadium. You also get some game footage, including brief clips from the 1932 World Series and the first two All-Star games. I love every second of this!

The disc also includes another short feature (4 min.) narrated by Bruce Goldstein, this time talking briefly about some deleted scenes with still photos as visual accompaniment.

We also get a selection of Home Movie (18 min.) from the Harold Lloyd Archives with narration by the director's granddaughter Suzanne Lloyd. This mostly consists of footage of Lloyd and family around the house, often entertaining their baby daughter Gloria (Suzanne's mother). Suzanne provides some affectionate and engaging commentary which helps when the footage drags on and feels a bit redundant.

The final extra is the 1919 short film “Bumping Into Broadway” (26 min.), the first two-reeler to feature the Glasses Character. The film is set in New York though not filmed there. Lloyd plays an aspiring playwright who crosses paths with a struggling show girl played by star Bebe Daniels. I thought this short was fantastic and darned funny. It benefits from a peppy 2004 score by Robert Israel.

Film Value:
Harold Lloyd was s superstar every bit on par with Chaplin and Keaton in the '20s. “Speedy” is a splendid entertainment that showcases Lloyd at the height of his powers. Criterion has included some fantastic extras to augment the finest transfer you're likely to see of Lloyd's final silent feature. And the Babe Ruth program on the disc makes this an option for baseball fans who have yet to discover the joys of Harold Lloyd.
Posted by Christopher Long at 11:25 AM