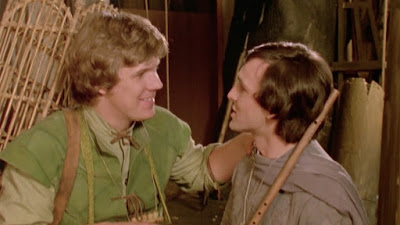 
The plot of Mozart's “The Magic Flute” never really made much sense. Prince Tamino's first accomplishment is to faint while fighting a dragon. This leads the Queen of the Night and her assistants to identify him as just the man to rescue the Queen's kidnapped daughter, Pamina. They probably just think Tamino's hot, which is fair enough. The Queen gives the prince a magic flute that will help him in his quest, but it doesn't really do much, and anyway, Tamino discovers that the kidnapper, Sorastro, isn't such a bad guy after all. A big battle brews at the end, but the bad guys just suddenly disappear, and everyone else lives happily ever after. Or maybe not, I'm not entirely sure. The End.

None of this has prevented millions from falling in love with one of the most-performed operas of all time, with Swedish director Ingmar Bergman proudly numbering himself among its biggest fans. Bergman actually tried to stage the opera in his childhood puppet theater, but wouldn't get to fulfill his dream until the much-ballyhooed 1975 release of his film adaptation.

After a few bucolic outdoor shots, Bergman moves into the theater (a recreation of the Drottningholm Theater, built in the 18th century in Stockholm) and lingers on the faces of the audience members as they listen to the overture. Though he focuses on a smiling little girl, Bergman shows close-ups of a diverse collection of opera enthusiasts of many ages and races, suggesting his eagerness to share his love of this opera with the whole world. To be honest, I found this extended montage of face it a bit on the interminable side, but it's certainly heartfelt.

Though Bergman made some substantive changes to the material (Sarastro is now Pamina's father, which casts the Queen of the Night as an embittered ex-wife), he and cinematographer Sven Nykvist present a fairly straightforward staged opera, though with a few playful looks backstage, including the Queen of the Night (Birgit Nordin) taking a smoke break at intermission. The action moves briskly as Bergman delights in underscoring the grand artifice of the big show, with unconvincing (yet charming) costumed creatures cavorting in the background and the actual text of the lyrics at times draped above the actors.

As Prince Tamino and Princess Pamina, Josef Kostlinger and Irma Urrila are little more than a blandly virtuous prince and a princess in need of rescuing, but they were cast to sing which they do pretty darn well. Hakan Hagegard steals all his scenes as the comic-relief chatterbox Papageno, whose function has always been to steal pretty much every staging of “The Magic Flute” so Bergman's just observing tradition here. Nordin shreds it as the Queen of the Night. Is “shreds it” standard opera criticism? Sorry, I am but a novice. 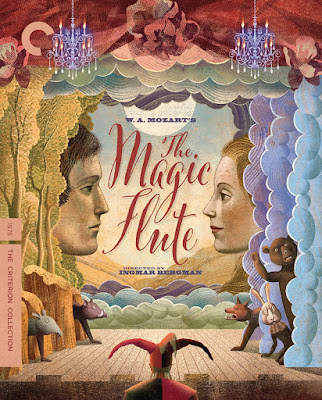 Video:
The film is presented in its original 1.37:1 aspect ratio. The film was digitally restored in 2017 by the Swedish Film Institute. Criterion originally released this on DVD in 2000 (it retains Spine Number 71) with a transfer many considered subpar by the company's high standards. This high-def restored transfer showcases warm colors and a bright overall look. The image generally looks a bit soft, or at least not as sharp as the best Criterion 1080p transfers, but it's still a strong effort. I don't own the old DVD as a comparison point, but from everything I've read and stills I've seen online, this looks like a substantial upgrade.

Audio:
The music for the film was prerecorded with Eric Ericson as orchestral director, and the singers mimed to their lines for the film. The lossless stereo mix captures the score quite robustly with no dropoff or any evident weaknesses at all. Optional English subtitles support the Swedish audio.

In a new interview (2018, 18 min.), critic Peter Cowie discusses the film's production history and provides some analysis of the unique Bergman touches added to Mozart's opera.

The disc also includes an interview with Bergman (29 min.), conducted by Sigvard Hammar, which originally aired on Dec 27, 1974, in tandem with the film's holiday release. Bergman casts himself as a populist, making an opera that the whole family can enjoy.

“Tystnad! Tagning! Trollflojten!” (1975, 65 min.) is a behind-the-scenes documentary which originally aired on Swedish TV on Jan 6, 1975. I found it a bit dull and rambling, to be honest, but fans might enjoy some of the looks at the film's crew hard at work.

Final Thoughts:
Bergman's “The Magic Flute” is often described as one of the best filmed operas, a judgment I'm not qualified to assess. It's certainly a fun ride, a much more sprightly and pleasant film than some viewers might expect from the stern Swede, but then again he directed his fair share of comedies. Like “The Seventh Seal.” Seriously, that's a damn funny movie – Gunnar Bjornstrand's sarcastic squire cracks me up every time.
Posted by Christopher Long at 10:16 AM