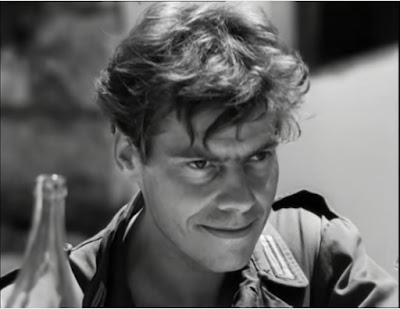 
(This is the first in what I plan to be a lengthy series of Werner Herzog reviews. I won't be reviewing every Herzog movie, but I'll be reviewing an awful lot of them, more or less in chronological order and about once per week, though I'm not really a big schedule guy. But please check back often if you just need a Herzog fix. And who doesn't need that?)

Every now and then a screenwriting competition actually amounts to something. In 1964, fresh-faced Bavarian poet Werner Herzog, just turned 22, nabbed the Carl Mayer state prize for a screenplay he submitted under a pseudonym, which is cool considering Werner Herzog is also a bit of a pseudonym.

Herzog, who had previously directed a few short films, rolled this relative pittance into what would become his debut feature, “Signs of Life” (1968). Though the film shows some signs of a young filmmaker straining to fill out even a modest feature-length running time of just under ninety minutes, it's amazing how much of what would become known as the trademark Herzog style is on display right out of the gate.

Protagonist driven mad by burgeoning evidence of his own futility? Check. Learned authorities completely oblivious to their own equal futility? Plenty of 'em. Three-hundred-sixty-degree pans of vast, sprawling landscapes that can't be contained by the mere film frame? Very first shot, pal. A hypnotized chicken? You insult me by even asking the question.

Stroszek (former tightrope walker Peter Brogle) is a German soldier stationed in Greece during WW II, not that you get mush historical context from the film. Injured in a parachuting accident (look quickly and you'll see young Mr. Herzog shlepping the helpless patient out of an ambulance truck), Stroszek is reassigned to a completely irrelevant post, guarding an obsolete munitions dump (the ammunition doesn't even fit German weapons) and trying to fill the endless, pointless days along with his Greek girlfriend and two fellow German soldiers also consigned to irrelevance for reasons undisclosed. 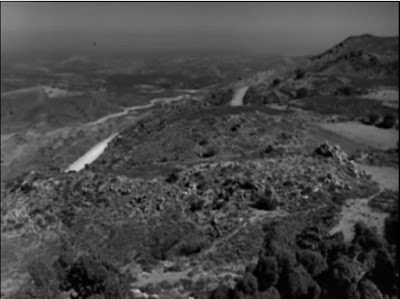 The film lingers on shots of the countryside (mostly on the Greek island of Kos) and close-ups of shattered architecture and other detritus of past civilization for a full ten minutes before any of the often tiny human figures resolve into actual characters. The first time we get a real good look at our ostensible protagonist, a narrator informs us, “The surroundings had a strange effect on Stroszek, but he could find no explanation for this.” Nor will he. In typical Herzog fashion, the film does not tell the story of a character going mad, but one who starts out mad and becomes even more unhinged. Because that's just the way the world works.

The privileging of environment over characters in the opening sequences is also quintessential Herzog. He speaks often about the expressive power of landscapes, and how they reveal the “inner landscapes” of his characters. Frequently exhibiting an active disinterest in psychology and psychoanalysis, Herzog strive instead to show us in striking visual terms just what's going on in their minds, or perhaps to remind us that there's really no way to see into such dark spaces. I am reminded of the indelibly sad scene in “Stroszek” where the title character (played by the great “unknown soldier of cinema” Bruno S.) cobbles together a sculpture he describes as a “schematic” of his (troubled) brain. That Stroszek, by the way, has nothing to do with the Stroszek in this film; Herzog explains that he used the name to pay back a student of the same name who once wrote a school paper for him. Sounds like a fair deal to me.

In the film's most striking shot, Stroszek finally loses what little sanity he was still clinging to and fires his gun (futilely, of course) into the air, at which point the film cuts to a breathtaking panorama of row after row of windmills pinwheeling in a valley below. It's the first of many similar shots in an oeuvre defined by obsessively repeated motifs, the frame crammed beyond capacity with dozens or hundreds of examples of a repeated image with no obvious center of attention to orient the viewer. The burning oilfields of “Lessons of Darkness” (1992), the furiously crawling sea of red crabs in “Echoes From a Sober Empire” (1990), veils of fog and flocks of birds in several films. These shots are so overwhelming to take in they speak only of, well, madness. Glorious, impenetrable madness.

Actually, now that I think about it some more, this Stroszek does have a connection to the more famous Stroszek of “Stroszek.” Both characters ultimately wind up as the punchline of a cosmic joke, an all-too-common fate for a Herzog protagonist. And the joke is... the cosmos doesn't care about you in any fashion. 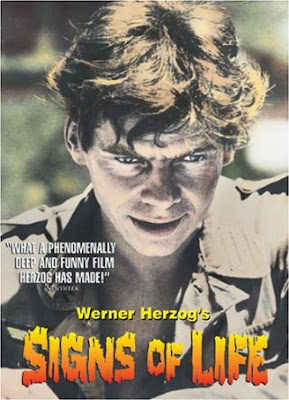 Video:
The film is presented in its original 1.37:1 aspect ratio. Released way back in 2005 by the former company once called New Yorker Video, this interlaced transfer is nothing to brag about. It's from a fairly clean transfer with only modest signs of damage, but the overall quality is rather indifferent with a slightly soft image throughout. The black-and-white photography (by the great Thomas Mauch in the first of many feature collaborations with Herzog) looks a bit washed out or blown out in a few places. It's OK, it's more than serviceable, but viewers spoiled by our sleek 2016 technology might be disappointed by this relic of days of yore.

Audio:
The Dolby Digital Mono track is similarly serviceable but unremarkable with the occasional bit of drop-off but nothing big. Optional English subtitles are provided and can occasionally be a bit difficult to read in some of the white on white shots.

Extras:
Aside from a lengthy and well-worn Trailer (4 min.), the only extra is a feature-length commentary track by Werner Herzog along with Norman Hill. Anyone who has listened to a Herzog commentary knows what a treat it can be – he would surely place one or two in an all-time Top Ten Commentary Track list. This one's not quite as great as the tracks for “Even Dwarfs Started Small” or “Stroszek,” but it's pretty wonderful.

Final Thoughts:
I've found a certain strand of cinephiles who insist that director's earliest film or films are always his best, especially if said films are deemed to be “overlooked.” “Signs of Life” is certainly overlooked in Herzog's oeuvre, and it's damned good. But it is also definitely not his best. So don't listen to the people that insist it is; they just have their fetish.

Also, when you see that piano player, that's Florian Fricke, later of Popul Vuh fame, the krautrock group whose signature sound would become synonymous with many of Herzog's better-known films.
Posted by Christopher Long at 10:15 PM