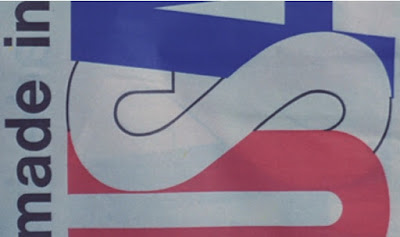 
“Made in U.S.A.” (1966) is the film that Quentin Tarantino has been trying to make for the past two decades. Cobbled together from a series of film references both obvious and obscure, Godard’s final genre film (noir, what else?) of the '60s is a celebration of cinephilia, and a blueprint of the writer/director’s obsessions, both personal and political. To riff on one of Peter Greenaway’s early films, “Made in USA” is “A Walk through G”(odard).

Godard dedicates his film to Nick and Sam (Ray and Fuller) and packs the movie to the gills with other cinematic references. Various characters are named Aldrich (director Robert), Mizoguchi, Don Siegel (played by New Wave cornerstone Jean-Pierre Léaud) and Widmark (actor Richard). Ruby Gentry is paged over a P.A., somebody lives on Preminger Street, and a host of film posters, some larger than life, are on display. The movie, while nominally adapted from a Donald Westlake novel, is modeled (also nominally) on “The Big Sleep” but with an even more impenetrable and surrealistic plot.

Anna Karina plays Paula Nelson (though we could argue what she’s mostly playing herself), a Sam Spade/Phillip Marlowe detective investigating the death of her lover, or at least that seems to be the story. Along the way she encounters a series of hoods (two of whom are named Robert McNamara and Richard Nixon), dispatching some of them and outmaneuvering others. A series of betrayals and digressions makes any effort to follow the logic of the plot impossible, but it doesn’t really matter. At one point the film stops so that Marianne Faithful, who happens to be sitting in a café, can sing “As Tears Go By.” Godard had lost all interest in relating a linear narrative and had other things on his mind. 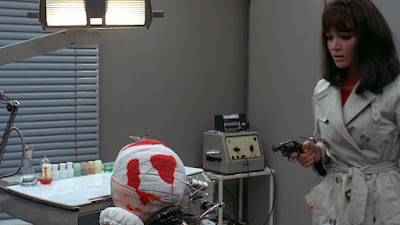 Chief among them is Karina, then Godard’s ex-wife for over a year. In “Pierrot le Fou” (1965), Godard had bid her a cinematic farewell and in “Made in U.S.A.”, well, he does so again though in an even more despairing tone. In one of many ways of reading the film, we can see the male characters as stand-ins for Godard, with Karina wreaking havoc on their lives. When she shoots one of them, his last dying words are “Oh Paula, you have stolen my youth.” In their last feature film together*, Godard did not take it easy on Karina, and I sometimes wonder why, exactly, she was willing to play such a role. (* Godard also directed Karina in a segment of the compilation film “The World’s Oldest Profession” (1967.)

Godard deals with the political as well as the personal (not that there's a difference). On top of the already severely modified Westlake/“Big Sleep” storyline, Godard grafts a tale of political intrigue ripped from the day’s headlines. Exiled Moroccan leftist Mehdi Ben Barka was arrested and mysteriously “vanished” in the fall of 1965. It’s a convoluted story that resulted in the conviction of two French officers, and also involved an underworld hood (he previously served time for bank robbery and attempted murder) named George Figon who was also an aspiring film producer. Figon, found dead in his home when police sought to arrest him, became the inspiration for the man whose death Paula is ostensibly investigating. This character appears strictly as a voice on tape, a voice provided by Godard. Each time his last name (Politzer) is mentioned in the film, it is blotted out by a loud, abrupt sound effect, a gimmick later appropriated by Tarantino in “Kill Bill.”

“Made in U.S.A.,” like several other Godard films of the period, is painted in dazzling primary colors; Karina’s dresses are often color-coordinated with the gaudy-gorgeous backdrops. Godard’s fondness for slapstick is on display in many scenes as well, though his dry staging doesn’t translate well for some viewers. The violence in the film is highly stylized, modeled more on comic books (an inspiration for many New Wave filmmakers) than on film conventions, stopping just shy of on-screen “BAP!” and “POW!” titles. It’s a stylistic choice, to be sure, and it works wonderfully but it’s also a nod to the film’s limited budget and compact shooting schedule. Roger Corman would have been proud.

With its web of references that can’t fully be understood by anyone other than the man who made them, “Made in U.S.A.” is an infuriating, indulgent and magnificent example of Godard’s mid-60s work. Shot just before “2 or 3 Things I Know About Her,” it represents not just (another) farewell to Karina, but the beginning of his farewell to commercial cinema. In 1967, Godard’s “Weekend” ended with a big “fuck you” to consumer audiences (emphasis on the consume) and announced his disappearance into the world of fully radicalized cinema that characterized much of his work of the late '60s and '70s. 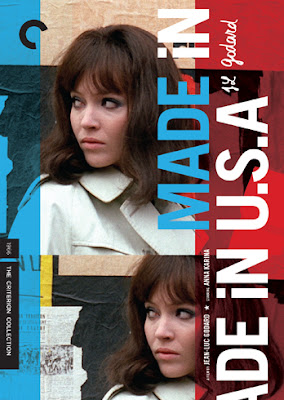 Video:
The film is presented in its original 2.35:1 aspect ratio. This is another fantastic transfer by Criterion, digitally restored from the original 35mm camera negative. Colors are bright (as they must be for this film) and pop right off the screen.

Audio:
The DVD is presented in Dolby Digital Mono. The soundtrack has been cleaned up as well as usual for Criterion. Optional English subtitles support the French audio.

Extras:
A very welcome addition is a “Concordance” (17 min.) that explains many of the reference points in the movie, from film to personal to political. This feature is written by Lenny Borger and narrated by Dan Stewart.

“On the Cusp” invites Godard biographers Colin McCabe and Richard Brody to place the film in the context of Godard’s career, and their discussion of the film’s transitional role in his oeuvre is vastly more detailed than mine.

There are also two interviews: Anna Karina from 2002 (10 min.) and László Szabó (6 min.) Szabó plays Paul Widmark in the film, and appeared in several other works with Godard.

The insert booklet features an essay by J. Hoberman of “Village Voice.”

Final Thoughts:
Just as “Made in U.S.A.” is a transitional film that paves the road for Godard’s retreat from commercial cinema, seen from today’s vantage point, it also feels like one of the earliest precursors of his monumental “Histoire(s) du cinema” project (late 80s-1990s), a rapid-fire free associative audiovisual battery of mostly unidentified film references that challenges viewers to keep up or perhaps just surrender to the clash of sound and image. It may be best to do the same with “Made in U.S.A.” Its whirligig visuals and its discordant soundtrack may distance you from the narrative, but they pull you in with their sheer virtuosity. A tough nut to crack, but well worth the effort.
Posted by Christopher Long at 8:58 PM