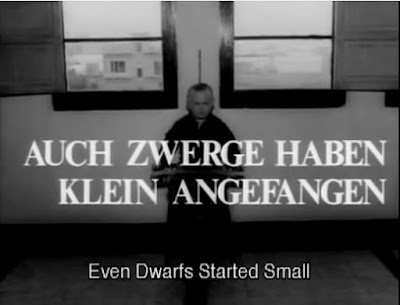 
Seeing a chicken in a Werner Herzog film is no surprise, but when the first chicken you see is cannibalizing another chicken, you get the first inkling of why the director describes his second feature film as “the gloomiest of gloom.”

No, the title “Even Dwarfs Started Small” (1970) doesn't make any sense, but then neither does the world – the real world, the world of the film, take your pick. Shot in stark black-and-white on the volcanic island of Lanzarote in the Canary Islands, the film depicts a nightmare landscape that has grown wildly out of proportion. Some critics at the time charged Herzog with exploiting his cast of dwarfs (the term used in the title) by portraying them as freakish, but the director countered by claiming that his stars were the normal ones and that the sick world of commerce and consumerism was the garish, oversized spectacle enveloping them.

The patients (inmates?) at an isolated, run-down institution rebel against the impotent, bloviating instructor, and spend most of the film wreaking havoc in the courtyard and surrounding countryside. They uproot the instructor's favorite palm tree, burn the potted plants, and throw broken pottery at a truck they've set to turn in an endless circle (an image that will crop up in many Herzog films, and which he attributes, perhaps tongue-in-cheek, to his brief tenure as a parking attendant.) The instructor retaliates by taking one of them hostage, but even bound with rope to a chair, Pepe just laughs dismissively at his would-be captor. Authority has no authority here.

The premise invites multiple interpretations and drew criticism both from the left (who thought he was mocking student revolutions) and the right (who cares?), and earned the film a ban from German censors. But I take Herzog at face value when he explains that he made the film, in part, as a way to express the dark thoughts gripping him after his harrowing experiences (near-fatal illness, imprisonment - the usual) while shooting “Fata Morgana,” filmed just before “Dwarfs” but released after, and perhaps to exorcise those demons. For better or worse, Herzog has long striven to compose shots and stage sequences divorced from real-world context, audiovisual spectacle meant to be appreciated purely for its aesthetic qualities and its poetic evocations. And with “Even Dwarfs” he creates some of the most memorable images in a career marked by the fanatical quest for new and distinct images. 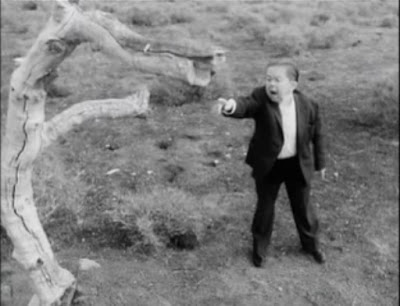 I'll just (mostly fail to) describe a few. There's the bug menagerie, a collection of dead insects on stick pins dressed in teeny-tiny clothes for the most depressing wedding of all-time, the mock religious procession fronted by a monkey tied to a crucifix, the futile efforts of tiny Hombre (Helmut Doring, by far the shortest of the cast members and also the most magnetic performer) to mount a full-size bed , the instructor ordering a tree to put its arm down, and the constant reminders of the hopeless, desiccated landscape in which this pocket apocalypse explodes and implodes. I refuse to pick a favorite ending to a Herzog film (OK, Stroszek's dancing chicken), but the last scene of this film ends on an absolutely terrifying note, with Hombre laughing maniacally while a camel (not previously seen) repeatedly stands and kneels. A spoiler? Please, there was no other way to end it.

The sometimes difficult production of this film provided some of the earliest stories in the snowballing Herzog legend. When one cast member caught on fire, Herzog immediately threw himself on top of him to extinguish the flames. As a way of apologizing for the trouble he put his cast through, Herzog wrapped shooting by jumping into a cactus patch. The human actors were amused, some of the other performers less so. Though Herzog insists that the poor tormented monkey was only inconvenienced for a few minutes and that the camel was merely responding to its trainer's commands, I doubt the chickens enjoyed being grabbed by the wings and flung about.

The net result is a film that comes as close to capturing true anarchy as I've ever seen, “Zero de conduite” by way of Bosch. And it's a genuinely frightening source of some of the most nervous laughter you'll ever enjoy. If you enjoy that sort of thing, but of course you do. Herzog describes good cinema as the agitation of the mind. “Even Dwarfs” provides all the agitation you can handle.

Video:
The film is presented in its original 1.33:1 aspect ratio. This is the first disc in the expansive Herzog collection from Shout! Factory, details of which you can read here. It is essentially a dupe of the old Anchor Bay DVD release but with a high-definition upgrade. The improvement over the old SD is significant, but the new high-def transfer isn't quite top-of-the-line. There are some instances of damage and distortion and some of the whieter black-and-white scenes look a bit washed out with a lack of detail. However, it's the best version of the film I've seen, and it's really quite fine. Let's call it perfectly adequate, but not eye-popping.

The low-quality pictures included in this review are most definitely not taken from the Blu-ray, and are a testament to the lousy versions of the film most of us had to watch before this high-def release.

Audio:
Look, I'm not gonna post the same boring audio reviews for each and every one of these discs. Or, rather, I will, but it'll be this short one. The sound is fine. Not great. Just fine. You won't complain. Except maybe about the subtitles which are occasionally tough to read and don't handle apostrophes very well.

Extras:
As with most of the discs in this set (most of which are just high-def upgrades of previous DVD releases) the only extra is a commentary track by Werner Herzog, hosted by Norman Hill and also featuring actor Crispin Glover who loves the film so much he made his own movie inspired by it (“What Is It?”) Like most Herzog commentaries, it's a work of performance art unto itself and if you can handle it, I recommend watching the movie regularly, then immediately re-watching it with the commentary. How did Herzog come up with that idiosyncratic song for the opening credits? Well, he heard a local 11-year-old girl with an interesting voice and then directed her to “sing her soul out” of her body while recording her in a cave. Which is how Hollywood has done it for years, of course.

Final Thoughts:
Few films truly merit the overused adjective “unforgettable.” But “Even Dwarfs Started Small” is one of them. You will never, ever forget it. Never. Ever. No matter how hard you try. Have fun.

Posted by Christopher Long at 11:55 AM