Only Angels Have Wings 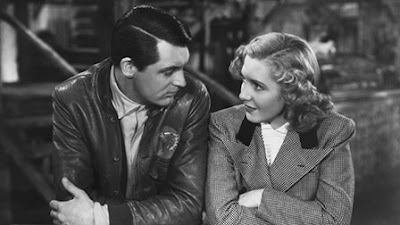 
After watching Howard Hawks's manly movie about manly men risking their lives to deliver air mail in in and around the fictional South America port of Barranca, my primary reaction is, “I can't believe how much crap women have to put up with.” I initially wrote “had” since the film in question was released in 1939, but I suspect it's still “have” though I hope a little less “have” than what poor Bonnie Lee (Jean Arthur) has to endure in “Only Angels Have Wings.”

Before Bonnie, a traveling showgirl who plays a mean piano, even appears on screen, the wolves are already hot on her scent. Two American flyboys (Allyn Joslyn and Noah Beery Jr.) greet a ship that has just pulled into Barranca and ask their contact about any new “talent” on board. They diagnose his emphatic denial as a phony when they spot the imprint of a doorknob on his forehead, after which Bonnie saunters by, and they lope after in pursuit. This light comic treatment of voyeurism and stalking is intended to be charming because flyboys will be flyboys.

Bonnie rebuffs their repeated advances until she realizes they're Americans and not, ick, locals (a dash of casual imperialism added to the mix). She eagerly follows them back to Dutchy's Bar, the hangout which serves as the location for most of the film as well as the makeshift home for all the employees of an adjacent airline (also owned by Dutchy, played by Sig Rumann) operating on a shoestring budget. When Bonnie starts talking, men trample right over her lines, then bet with each other over who gets to take her to dinner (her preference is not requested) while other teammates wait impatiently in the on-deck circle for their turn at the plate. She's supposed to smile at it all, ostensibly because she's flattered, more practically because she's outnumbered. It's easy to understand why the only man she actually takes an interest in is the one who takes no interest in her, boss man Geoff (Cary Grant).

An alpha male among alpha males, Geoff Carter is the kind of taciturn, nail-spitting character John Wayne would grow up to be a few years later. Geoff refuses to think about tomorrow (he doesn't even carry his own matches – too much commitment) and only cares about getting the job done, and if a few lives are spent in getting the mail delivered through the treacherous Andes then it's hardly anything worth crying about. His adrenaline-laden employees agree and besides they're certainly not in it for the paltry money; they've got flying in their blood and they wouldn't want to live or die any other way. When one of the pilots buys the farm early on, his former compatriots knock back a few drinks, sing a few songs, and pretend they don't even recognize his name. 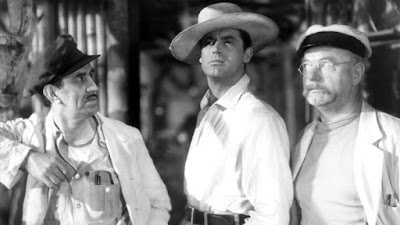 Bonnie can't understand their cavalier attitude, but she's about to get pushed to the side anyway so we can pay attention to more masculine endeavors. Women weaken legs, don't ya know, and that mail won't deliver itself. Besides, Bonnie has plenty of competition for hunky Geoff, primarily in the form of Kid Dobb (Thomas Mitchell, also in “Gone With The Wind” and “Stagecoach” the same year), Geoff's aging and unquestioningly devoted assistant. Kid's eyes are going bad, but they're still always trained on the boss man, though you don't need to see to sense that billowing cloud of testosterone mist that sweeps up everyone in Geoff's wake. Even ol' Dutchy can't help but be a little smitten.

After Hawks and screenwriter Jules Furthman spend about half the film establishing the hyper-masculine equilibrium at Dutchy's, they introduce a character who disrupts it. New pilot Bat MacPherson (silent film star/heartthrob Richard Barthelmess, who flat-out owns all of his scenes) arrives at Dutchy's with a secret that doesn't stay hidden long. It's the kind of secret that would get his ass kicked by the entire company if not for the fact that they're desperately short of pilots and, no matter what, that mail has to be delivered. He also arrives with wife Judy, an absurdly gorgeous Rita Hayworth in one of her earliest substantial roles, yet another source of potential trouble not just because she looks like Rita Hayworth but also because she happens to be an old flame of Geoff's. More competition for Bonnie (and Kid), but Bonnie's almost nowhere to be seen when Judy takes center stage.

Furthman's script is sometimes a marvel of sly economy. When Kid takes longer than he should to recognize Bat, it's not just a set up for looming conflict, but also a cue for Geoff to test his veteran pilot's eyesight. Likewise, when Geoff agrees to hire Bat despite the turmoil he'll generate, it appears to be a matter of hardscrabble pragmatism, but then again there's also a Rita Hayworth in the equation. Once or twice, the script falls back on contrivances, including a very silly scene with a gun that is a misfire in multiple ways, but mostly the story alternates between waiting and action, pilots killing time at Dutchy's before risking death in the skies.

Hawks's love of aviation is well-known, of course, and he lavishes plenty of attention on the miniature planes and sets for the film's many harrowing flights. It's a bit difficult to determine what audiences were intended to feel at the time. If these biplanes and lumbering hangars with wings were state-of-the-art in 1939, today they look like rickety deathtraps that surprise mostly for their ability to lift off the ground, so it doesn't take much work to convince the modern viewer these pilots are in mortal danger every second of the way.

They don't show any fear, because that wouldn't be macho and, besides, maintaining an even keel is the best way to land in one piece, so they speak in staccato radio short-hand (“Calling Barranca, Calling Barranca”) and react calmly and methodically to the unexpected which, in their world, is always expected. Perhaps we owe Hawks's passion for the authentic world of aviation for the fact that a few of the flights in the film actually end in failure with pilots beaten by the elements forced to turn around. Macho can't knife through a thick fog bank no matter how hard it thrusts.

Along with “Rio Bravo” (1959), “Only Angels Have Wings” is one of Hawks's best hangout movies. Few filmmakers observed guy codes with such active interest, a mix of about two-thirds respect and one-third amusement (I'm making up the percentages – ignore them). When Bonnie returns, somewhat perfunctorily, at the end, it's a reminder that it's kind of a shame there's not really any room in this treehouse for girls. She sure seemed like one flinty dame when we first met her and getting to know her better would have been a treat, but the truth is she wasn't going to do much to get that mail delivered, and getting the job done is all that counts. 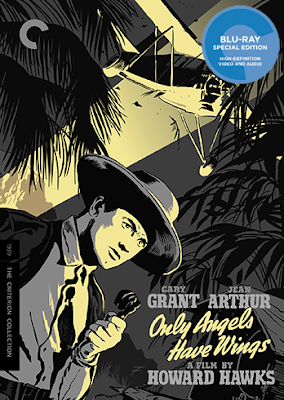 Video:
The film is presented in its original 1.37:1 aspect ratio. This 4K digital restoration by Sony Pictures Homes Entertainment has a wonderfully grainy texture to it that just screams “film” and the black-and-white contrast is rich and nuanced with a satisfying amount of detail in darker scenes. This high-def transfer would look good for a film of any era – for a film release three-quarters of a century ago, it's a marvel.

Audio:
The linear PCM mono track is rather flat and narrow, as you would expect for a film from this era. The lossless audio is crisp and most distortion-free and the music (all diegetically sourced) by Dimitri Tomkin sounds just fine. Optional English subtitles support the English dialogue.

Extras:
Criterion hasn't provided a commentary track, but they've found plenty of other supplements to fill out this Blu-ray release.

First up is an audio excerpt (19 min.) of a conversation between Howard Hawks and director Peter Bogdanovich recorded in 1972 at Palm Springs. I didn't find a whole lot here of great interest, but it's fun to hear Hawks, then in his mid-70s, reminisce about one of his favorite films.

Critic David Thomson (2016, 17 min.) speaks about the film in the context of Hawk's career as well as Cary Grant's. He notes that Hawks's now-loved previous film “Bringing Up Baby” (1938) had been a flop and that Hawks wanted a slam-bang action hit. He also claims Hawks was the first director to see a darker quality in Grant's persona.

The short feature “Howard Hawks and His Aviation Movies” (2016, 21 min.) provides film scholars Craig Barron and Ben Burtt the opportunity to talk about Hawks's treatment of flying scenes in his aviation movies, both in terms of the visual effects and the sound, the latter being the key to making the scenes particularly gripping. They also discuss 1930 as the golden age of aviation when it was one of the grand public obsessions.

The disc also includes a May 29, 1939 radio broadcast of the “Lux Radio Theatre” adaptation (56 min.) of “Only Angels Have Wings,” starring most of the members of the film's cast.

A Trailer (3 min.) rounds out the collection.