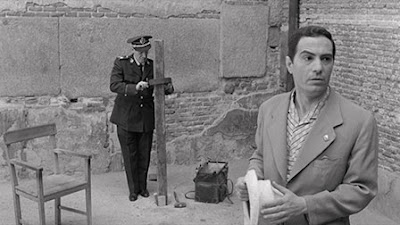 
This tender, heart-warming tale begins with a wizened, stoop-shouldered old man who has just killed for the last time, and ends with his awkward, greenhorn son-in-law who follows in his footsteps to work that trusty garotte for the first time. I dare you not to cry. It's the circle of death, and it moves us all. C'mon, everybody sing!

Director Luis Garcia Berlanga is so venerated in Spain that his name appears on street signs and buildings in his birthplace of Valencia. Spanish cinephiles often rank him alongside Luis Bunuel among the nation's greatest filmmakers, but his movies have received relatively minimal distribution internationally. “The Executioner” (1963) is the first Berlanga film I've seen and I have to admit the only other ones I'd heard of before, even in passing, are “Welcome, Mr. Marshall” (1952) and “Placido” (1961). Perhaps it's worth noting that in the 2012 “Sight & Sound” poll, six voters named “The Executioner” one of their top ten films of all time, four of whom are listed in the voting results as being from Spain, one from Mexico, and one from Uruguay.

On one of the extras on this Criterion release, Pedro Almodovar attributes Berlanga's relative lack of international distribution to the director's penchant for overflowing verbiage; his characters talk all the time and often at the same time as each other, and perhaps subtitles can't quite reproduce the experience for non-Hispanophone audiences. I don't know enough about Berlanga's oeuvre to evaluate that assessment. Surely there are other talky directors who have thrived around the globe (Woody Allen, Eric Rohmer) so perhaps there's a more contingent explanation: maybe his films simply weren't marketed effectively enough or at the right time and wound up being eclipsed by better publicized directors. Perhaps, maybe – indisputably, I should leave this matter to someone who knows more about Berlanga.

The screenplay, which traffics in a familiar brand of Kafka-esque bureaucratic horror, frequently juxtaposes the grotesque with the humdrum quotidian. A bored police officer slurps his lukewarm soup while sad-eyed Amadeo collects his pay for his just-finished execution. Jose Luis talks to his co-worker about making a phone call while the two of them guide a coffin across an airport tarmac with a line of black-clad mourners wailing behind them. At a family picnic, Amadeo, always eager to share his war stories, quite happily demonstrates proper garroting technique with a rolled-up newspaper. 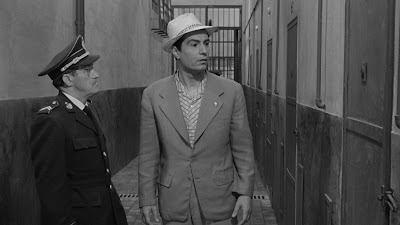 The quiet gallows humor forms the gruesome basis for Berlanga's examination of the staggering price of assimilation. In order to secure a major upgrade in government housing, the affable but cowardly Jose Luis reluctantly agrees to follow Amadeo's example and apply for a job as executioner himself (he fills out the paperwork while licking a strawberry ice cream cone), plowing through layers of red tape to secure a position he doesn't even want. The film argues that he has little choice, or is at least very strongly incentivized to pursue his new career, in a tightly-regulated society ruled by a methodical logic. You've got to pay your way, and in Jose Luis's case the math is elementary: bring a life into the world, and the only way to balance the ledger is to take one. I feel like we're asked to overlook the fact that Jose Luis could maintain his personal sense of dignity by settling for more modest accommodations, but let's just go along with the premise.

Berlanga plays most of the film in a sunny tone, focusing on the budding romance and the comfort of domestic space, with the specter of death (i.e., state-sanctioned murder) looming off-stage. Even when newly-minted executioner Jose Luis, who reads the crime section with dread each day, finally gets his first assignment, the family treats it as an opportunity for the honeymoon they never had, as husband, wife, child, and father-in-law bask in the warm glow of sunny Majorca until Jose Luis is finally dragged (almost literally) to work. The light comic tone makes the final sequence all the more chilling, when Jose Luis does everything he can to stall and weasel his way out of the job, praying for a last-minute pardon or illness to take him off the hook. The extended, nerve-racking sequence culminates in a brilliant shot in a vast white room where it is the blubbering executioner, not the condemned prisoner or his bereft family, who collapses on his way to the death chamber and must be consoled by both priest and police.

“The Executioner” became a political hot potato in Francoist Spain after somehow initially slipping past censors; the film was allowed to play (with some official protest) at the Venice Film Festival where it netted the FIPRSECI prize, but drew criticism later, with Franco calling Berlanga “a bad Spaniard.” Some leftists also critiqued the film as an apologia for Franco, which seems like an inexplicable interpretation today, but maybe you had to be there.

The film's matter-of-fact approach to its dark subject matter may throw some viewers, but its a reminder that nothing is more absurd, or terrifying, than reality closely observed. And Berlanga sure has a keen eye for the tiniest and truest details. 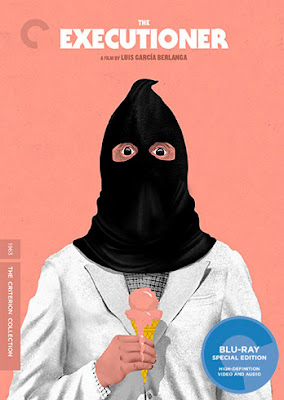 Video:
The film is presented in its original 1.85:1 aspect ratio. Criterion labels this as “a new digital transfer (that) was created in 4k resolution” which isn't the same thing as a restoration, but if this wasn't restored, it was certainly sourced from a well-preserved 35 mm negative. The black-and-white contrast is strong, though the film mostly takes place in brighter spaces, including the stark white of the room at the end. Image detail is strong throughout. Another top-notch 1080p transfer from Criterion.

Audio:
The linear PCM mono track doesn't have much depth and probably isn't meant to. It is, as is typical from Criterion, clean and crisp throughout. I think most of the dialogue is post-synched, so sometimes voices don't quite sound like they're coming from the actors, but that's fine. Optional English subtitles support the Spanish audio. The white subtitles are occasionally difficult to read against the brigher black-and-white shots.

Extras:
Criterion kicks off the collection of extras on this disc with a brief (4 min.) interview with director Pedro Almodovar, who labels Berlanga one of Spain's two greatest filmmakers, alongside Luis Bunuel. He argues his case enthusiastically in just a few minutes.

The main extra is a collection of interviews titled “Bad Spaniard' (2016, 56 min.) which includes interviews with the director's son Jose Luis Berlanga, critic Carlos F. Heredero, and several others. The features cuts back and forth among the subjects frequently, explaining why Berlanga is so widely admired in Spain. The director's name has become its own eponymous adjective, with Berlanga-esque representing an idiosyncratic brand of chaos. This piece details Berlanga's career from his film school days through “The Executioner” and beyond while also taking time to spotlight writer/collaborator Rafael Azcona's contributions to several of the director's key films.

“La Mitad Invisible” (28 min.) is a 2009 episode of a Spanish television series which investigates the film's influence since its release. I found the style a bit irritating, but it's worth watching.

The final extra is an original Theatrical trailer (3 min.)

Final Thoughts:
The disparity between Berlanga's reputation in Spain and abroad is a reminder that we should understand the biases in any film canon. About ten years ago, the Spanish film journal “Caiman Cuadernos de cine” conducted a poll for the best Spanish films of all time. The top two are widely known – Bunuel's “Viridiana” and Victore Erice's “The Spirit of the Beehive.” Berlanga took the next two spots with “The Executioner” and “Placido.” Now, the top three Spanish films in the poll are all in the Criterion Collection. It's a good start.

Posted by Christopher Long at 5:56 PM