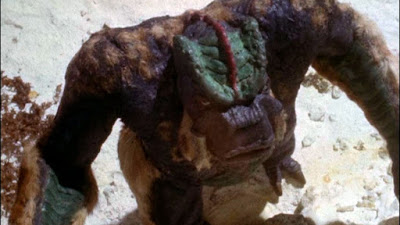 (I'm reposting this 2006 review with some modest revisions. Nearly a decade later, the Criterion Collection has expanded significantly so perhaps the first few paragraphs aren't as relevant today. Criterion has actually released a decent amount of B-movie horror - now we need to get them working on more films from India, China, and a whole lot of other national cinemas. In any case, I don't remember a lot of these details about "Equinox" but I do remember that I enjoyed the heck out of this release.)


Many Criterion fans have been asking the same question in recent weeks: Who the heck decided to release “Equinox” (1970) in the collection and can I have some of what he or she was smoking?

The question is an understandable one. With its dirt-cheap production values and formulaic screenplay about teenagers battling demons and giants, “Equinox” ranks somewhere between B-movie and student film. What’s next: The Criterion Collection is proud to present … “Manos: the Hands of Fate”?

But this question expresses a bias of what constitutes “important” cinema. The Criterion Collection has always featured top-quality transfers, premiere extras, and, of course, great movies, but if I have any complaint about the company, it’s for their relatively narrow focus. The Criterion Collection bills itself as “a continuing series of important classics and contemporary films” but that “important” can too often be read as “IMPORTANT!!!” Criterion tends to stick with films by the most sanctified European or Japanese auteurs with the occasional nod to American independent cinema or classic Hollywood along the way. That’s a far sight better than the aesthetically-bland studio dreck the AFI’s most recent list is promoting as “Great Films” but it doesn’t do full justice to the diversity of world cinema. Understood in this context, “Equinox” is not just a quirky choice by Criterion, but a welcome step in an exciting and relatively new direction.

For every studio blockbuster or art-house masterpiece, there are thousands of home movies being shot throughout the world. Amateur filmmaking is the heart and soul of cinema, from the simplest vacation video to an ambitious backyard project such as “Equinox.” Dennis Muren, David Allen, and Mark McGee were three teenage cinephiles who worshiped at the altar of special-effects gurus like Willis O’Brien (“King Kong”) and Ray Harryhausen (“The 7th Voyage of Sinbad” and many others). They didn’t just watch monster movies - they discussed them, scrutinized them, and paid tribute to them in the most loving manner possible: they made one of their own.

Literally filming in Muren’s backyard (and other nearby locations), they combined Allen’s puppets, McGee’s screenplay, and the help of several friends to shoot a feature-length film they eventually dubbed “The Equinox… A Journey into the Supernatural.” The title was grandiose, but the story was simplicity itself: four teens (the actors were in their 20s but played young) take a trip to the woods where they find a mysterious old book of evil and are attacked by an array of underworld denizens that includes an ape-like creature modeled on King Kong, a giant octopus, and a flying devil who really makes life hell for the poor kids. 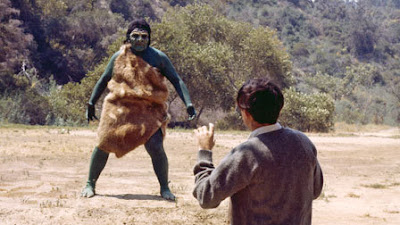 For a film made by teens with no formal training and virtually no budget, the results are amazing and reflect the passion they poured into their debut feature. The stop-motion animation is rough, but quite compelling, and the team even figured out a way to use front projection (a technique not even in use in Hollywood at the time) to make some of the actors look like they were running in front of the animated puppets. Muren, who directed the film, also used forced perspective to create a scene in which a not-so-jolly green giant (played by friend Jim Duron) battles the group. The monsters are the raison d’être for the show, so it’s understandable that Muren didn’t focus too much energy on coaxing convincing performances out of his eclectic cast that includes the future Herb Tarlek of “WKRP in Cincinnati” (Frank Bonner) and, of all people, fantasy author Fritz Leiber in an all-too-brief cameo as the mysterious Dr. Watermann. If you're going to get upset about the stiff acting, maybe this movie just isn't for you.

The filmmakers were delighted with their results and were disappointed when they struggled to find any interested buyers. Fortunately, stalwart producer Jack H. Harris (best known for “The Blob”) saw promise in the boys’ handiwork and acquired the film with plans to re-shoot parts of it for a theatrical release. This ultimately involved re-shooting the majority of the scenes (with the same actors, now just a few years older) and adding a menacing forest ranger named Asmodeus (that’s never a good sign!) to the mix. Harris whittled the title down to the more succinct “Equinox” and it became a surprise hit in 1970, succeeding both in theaters and in home sales, fueled by ads in Forrest J. Ackerman’s legendary magazine “Famous Monsters of Filmland.” “Equinox” became a cult hit that was most ardently embraced by special-effects aficionados who were quite understandably amazed and downright inspired to learn that teens could make a “Harryhausen-style” movie in their own backyard.

Most fans are familiar only with the Jack H. Harris version which has played on many a late-night television station (probably one high up in the UHF band), but the Criterion DVD also includes the original 1967 version as filmed and cut by Muren and crew. Both movies use the same cast and same story, but the differences are considerable. The original version has a Hardy Boys “gee gosh” quality to it; the characters are more interested than terrified when they encounter flying demons and corpses, and the acting reveals an almost total disregard for psychological realism. It is much more an adventure film than a horror flick. The 1970 release is crafted to more closely fit the expectations of the horror genre, and the script and the performances have been polished to seem more naturalistic (we're talking on a relative scale here) as heroes become active participants rather than passive gawkers. This later version is more coherent and a bit “scarier,” but with coherence the flaws in the film seem more like mistakes than signs of personal craftsmanship. I appreciate the wide-eyed innocence of the original just as much, if not more, than the relative sophistication of the more professional version.

In the late '70s, Dennis Muren heard a rumor about a space movie a fellow named George Lucas was making and he asked if he could help out. The rest, as they say, is history. Muren now has seven Oscars (plus two Special Achievement Awards) on his shelf for his work with Lucas, Spielberg, Cameron, and other titans. He didn’t let his love of stop-motion animation blind him to other possibilities in the field. Muren was a pioneer both in short-lived go-animation (“Dragonslayer”) and CGI animation (with an award for “Jurassic Park” among others). David Allen likewise became a force in the animation industry with his work on films such as “Twilight Zone: The Movie,” “Willow,” and many others before his death in 1999.

“Equinox” is no masterpiece of modern cinema, but it is a lot of fun, especially when you know the story behind the movie. I suspect many viewers will get their kicks from laughing at the film’s wooden acting or ham-fisted writing, and that’s OK. But don’t condescend too much – this movie was made with a rare degree of sincerity and passion, and it helped to launch several successful film careers. I’ll take “Equinox” over at least half of the films the Academy has deemed Oscar-worthy over the years. Heck, maybe even three-quarters. 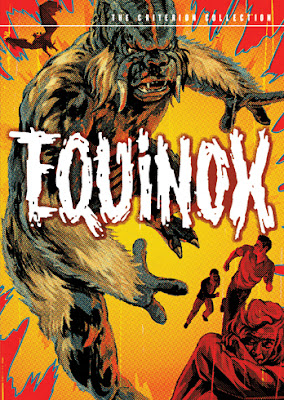 Video:
Both version of the film are presented in their original 1.33:1 aspect ratios. The 1967 version was restored from a 16mm workprint that I can’t imagine was stored under the most pristine conditions, and it shows the wear and tear of nearly forty years. The 1970 version looks considerably better, though it is quite noticeable when the film switches from the re-shot footage to original footage from the ’67 version. Of course, with movies like this, the poor quality of the image only adds to the charm, so there’s really nothing to complain about here. I doubt either film has looked better than on these restored transfers.

Audio:
The films are presented in Dolby Digital Mono. Optional English subtitles support the audio, and may be necessary in some of the more poorly-recorded spots.

Extras:
You wouldn’t expect a whole lot of extras for such a low-budget film, but you would be mistaken. Criterion has unearthed just about every possible nugget for this two-disc release.

Disc One includes both versions of the film, each of which comes with an audio commentary: Muren, McGee and animator Jim Danforth for the 1967 version, and Jack Harris and director Jack Woods for the 1970 version. The true joy for horror fans, however, is a video introduction by the legendary Forrest J. Ackerman who talks mostly about himself, but then again, he’s Forrest J. Ackerman, so why not?

Disc Two offers the most eclectic collection of ephemera I have ever seen on a Criterion release. The best approach is to summarize them in list form.

- “Zorgon: the H-Bomb Beast from Hell” (1972, 9 min.): A silent student film directed by Kevin Fernan, featuring not only the titular beastie but also cast and crew from “Equinox” (Mcgee, Allen and Jim Danforth) plus future FX/makeup guru Rick Baker.

- A David Allen Appreciation: Allen passed away in 1999, and this feature is a tribute to the legacy he left behind to the animation community. “The Magic Treasure”(19 min.) is a stop-motion animated kids' short in the spirit of “Frosty the Snowman” or “Rudolph the Red-Nosed Reindeer.” Also included is a classic Volkswagen commercial featuring a King Kong who is delighted to find a Volkswagen spacious enough even for the portly primate.

-Equiphemera includes an endless array of stills, posters and just about anything else you can name associated with the film or with the filmmakers. I still haven’t gotten to the end of this one.

Finally, one of the best features in this set may well be the superb essay by Brock DeShane (who also produced the DVD) which highlights the delightfully garish insert booklet. This is a must-read for anyone who cares about this kind of filmmaking.

Final Thoughts:
“Equinox” (in either form) will never be confused with “Citizen Kane” but it’s a splendid example of amateur filmmaking and a damned fine piece of special effects work at that. Today everyone has access to advanced editing tools and effects via their Mac or PC, but in the 1960s, Muren, Allen and McGee achieved something pretty extraordinary. Kudos to Criterion for expanding its horizons and giving this film the attention it deserves.
Posted by Christopher Long at 3:53 PM