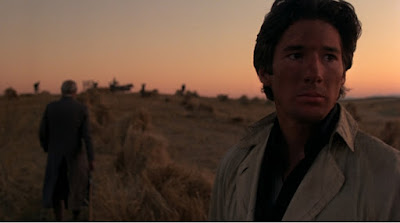 
Noël Carroll described Terrence Malick as a filmmaker who portrays the "primacy of experience." Malick attempts to capture images and sounds and words that are largely unfiltered by our usual perceptual processes. His films emphasize the act of looking for its own sake; they bypass language and other intermediary channels to plug the viewer directly into experience itself. Malick´s films, like many of Werner Herzog´s, layer one pristine image on top of another to create a density of imagery so tangible it becomes, in Carroll´s words "too much there."

Malick´s extraordinary second feature "Days of Heaven" (1978) is so much "there" it feels like a blanket enveloping the viewer or, to less sympathetic viewers, an impenetrable shield that prevents access. A swarm of locusts; a rippling stream; wheat fields shimmering in a gentle breeze; Malick´s world is alive in a way that only a few filmmakers have ever rivaled. Oh, there are people in Malick´s movies too, and they matter, but their stories don´t necessarily take precedence over the landscape's tale. All parts of the environment receive equal billing here: people, animals, insects, trees, clouds. Even the invisible is tangible here; the wind in "Days of Heaven" is practically a character unto itself.

Like Malick´s first film, "Badlands"(1973), "Days of Heaven" features a couple on the run; unlike "Badlands" this is only a minor aspect of the film´s mosaic. Bill (Richard Gere) accidentally kills a factory foreman, and runs away with his girlfriend Abby (Brooke Adams) and his little sister Linda (Linda Manz). They take up work as migrant farmers on a plantation owned by an unnamed Farmer (Sam Shepard, looking much younger than I ever remember Sam Shepard looking). The Farmer, dying of cancer, falls in love with Abby; Bill persuades her to marry the Farmer in a poorly-concoted scheme to inherit his money. Spending any more time on plot summary would grossly misrepresent Malick´s achievement. 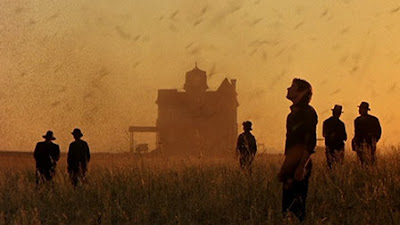 The film is framed with a halting, awkward narration by Linda Manz who sounds as if she is groping for the words as she speaks them, yet another means by which Malick undermines the interpretive power of language. Here the words spring forth like a natural phenomenon, not fully planned but blossoming slowly into fullness. Linda is an odd choice for narrator since she remains so aloof from the action of the film, but then again everybody in the film is aloof in his or her own way. By emphasizing natural elements and dropping startling new images into the film seemingly out of the ether (oh, look, a flying circus has just arrived) Malick de-centers his narrative. The characters, human and otherwise, circle around the singularity at the very core of the film.

The editing is free-form, though positively classical compared to what was to come decades later in Malick's work. Certainly there are times when Malick employs standard narrative strategies, such as when he cuts to a shot of Bill and Abby holding each other as they walk away, to a brief shot of the Farmer looking suspicious. Other times, Malick will cut from a line of dialogue right into an entirely unrelated scene; even within a single dialogue scene, the characters appear to wander off in different directions only to suddenly find themselves back together again. Malick distills each moment to its essence, capturing the ineffable on film.

Many beautiful shots linger in the mind´s eye for days and forever, but the film´s most talked-about the scene is the fire near the end. Malick creates a Biblical conflagration (an impression heightened since the fire follows a swarm of locusts) with flames roaring high in the background, and swarms of (locust-like) humans depicted only as silhouettes in the foreground, futilely attempting to stem the tide. It is one of the most visually stunning sequences every committed to film.

Cinematographer Nestor Almendros, best known at that point for his 1970's work with the French New Wave directors, talks in the insert booklet that comes with this DVD about how he found a kindred spirit in Malick. Consistent with his focus on the "primacy of experience," Malick repeatedly asked Almendros to do less and less throughout the film; less lighting, no filters, etc. According to Almendros, the Hollywood-trained crew almost rebelled, but he was on the same page as the director. Almendros, with a little help from Haskell Wexler who came on to finish shooting after Almendros left for another commitment, wound up photographing one the most beautiful and memorable films of 1970's Hollywood. 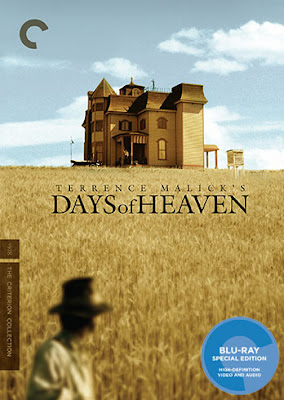 Video:
I may have mentioned this already, but “Days of Heaven” is one of the most beautiful films ever made. Anyone who denies this can and must be ignored. It’s a visual pleasure junkie’s dream even on SD. The Blu-Ray release is so dangerously “pure” it should be a controlled substance.

Just take a gander at the climactic fire sequence as the definitive example. Each little detail stands out in sharp relief: the locusts, the tiny silhouetted people, the flames. Heck, even the wind looks great. Here you really see how much richer and sharper the shadows are – it really makes the SD look weak by comparison, and I thought the SD was pretty strong.

Audio:
The Blu-Ray is presented in DTS-HD Master 5.1 audio. The lossless surround track is very deep and reinforces the sensory immersion experience of Malick’s “too much there” film. Sounds feel like they come from different planes of action within the frame, and the wind is practically its own separate soundtrack.

Extras:
The extras are duplicated from Criterion’s 2007 SD release.

Several interviews comprise the rest of the extras. There is a 2007 audio interview with Richard Gere (21 min), and a 2002 video interview with Sam Shepard (12 min.) We also get 2007 interviews with camera operator John Bailey (20 min) and with Haskell Wexler (11 min.)

The insert booklet includes an essay by film critic Adrian Martin, and a lengthy excerpt from Nestor Almendros´ 1984 autobiography "A Man With a Camera.

Film Value:
It would be nice if “Days of Heaven” came with more extras. This certainly seems like a title that deserves the deluxe Criterion treatment. But that’s a minor complaint compared to the opportunity to see one of the most luminescent films ever made in 1080p. Simply in terms of audiovisual quality, this is certain to be one of the best BR releases of 2010.
Posted by Christopher Long at 11:42 AM