Writer/director King Hu's wuxia masterpiece “Dragon Inn” (1967) opens not with a flurry of whirling, clanging swords, but with a flurry of voice-over narration. Wisely packing all of the film's exposition into a few minutes, the narrator situates the film in the Ming Dynasty (1457 A.D. for Western audiences) against a backdrop of political intrigue, which basically boils down to the line: “Eunuchs have seized power at the palace.” Eunuchs? Oh yeah, this is gonna be a wild ride.

Beginning with a sense of the grand historical epic, the film quickly pares away all extraneous elements to pursue a simple, focused plot. The chief eunuch Cao Shao-qin (Bai Ying) has framed the loyal general Yu Qian for treason; the general is executed and the Yu family sent into exile. Eager to prevent any future problems, Cao secretly dispatches his forces to tear the surviving Yus “up by the roots.” Good guys race the bad guys (both sides being blessed with near-supernatural martial prowess) to defend the Yu family, and everyone meets at the title location, which provides the setting for the bulk of the film's action.

The Dragon Inn is a modest structure on a dusty road to nowhere in rural China, but King Hu went to great pains to construct his set with authentic, sturdy wooden material. After all, we're going to spend a lot of time at the inn and it will need to stand up a beating from both sides, corrupt government forces and the loose-knit collection of travelers and knights-errant who show up to combat them.

Master swordsman Xiao Shao-zi (Hu veteran Shih Chun) enjoys the first major confrontation with the evil Eastern Depot forces. In fact, he enjoys it over a good meal. Sitting alone in a dining room amidst a brigade of opponents, he calmly sips his bowl of noodles while deftly avoiding a bottle of poisoned wine and effortlessly snatching the occasional stray dagger tossed his way. He hardly even stands up, let alone break a sweat.

The sequence is so lengthy, it comes as a mild surprise that Xiao won't be the sole focus of the action, at least from the hero side. He is soon joined both by a pair of traveling brothers, one of whom turns out to actually be a sister, Miss Zhu (Shangkuan Ling-fung), one of the many great female action heroes King Hu brought to the screen, as well as by the innkeeper who's no slouch in the fighting department himself.

Hu, working with action choreographer Han Ying-chieh (who also plays one of the chief baddies), balances stillness with sudden bursts of action to great effect. In one major assault on the Dragon Inn, Miss Zhu strides methodically forward only to suddenly dodge a volley of arrows and then to just as abruptly find herself surrounded by warriors who appear almost out of thin air. In most duels, the combatants stalk each other, circling warily as they wait for the single sign of weakness that invites them to strike. Measure twice, slice once. All filmed in glorious 2.35:1 widescreen, which Hu and cinematographer Hua Hui-ying exploit to its very edges.

There's little doubt about which side will win, but Hu ratchets up the anticipation by withholding the battle with the evil Cao, renowned throughout the land as the greatest of all swordfighters, until the very end. The heroes will need to work together to defeat him, and they even employ a nasty trick to even the odds: they ruthlessly mock Cao for being a eunuch. Darned if those “I guess you don't have much to lose down there” jokes don't actually seem to hit home, as if he's never heard them before. It's almost enough to make you feel bad for the poor genocidal warlord – after all he was the victim of a horrible mutilation as a child but, nah, you're still cheering for him to get decapitated. Might as well lose it up top too, eh, buddy? C'mon, that really hurts!

“Dragon Inn” was King Hu's first feature after moving from Hong Kong to Taiwan, and it was a massive box-office hit, one that cemented his credentials as an independent filmmaker. It has also come to be seen as one of the defining films of the wuxia genre, a reference point for directors such as Chang Cheh, Tsui Hark, Ang Lee, and even Tsai Ming-liang, if in a rather idiosyncratic way. 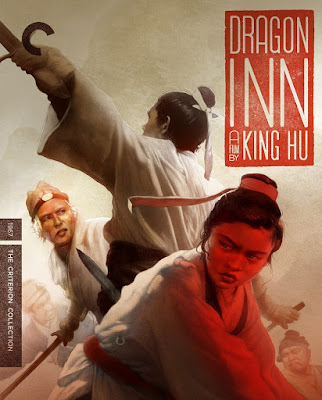 Video:
The film is presented in its original 2.35:1 aspect ratio. The film was digitally restored in 2013 by The Ministry of Culture and Chinese Taipei Film Archive, providing the source for this new 1080p transfer, supervised by cinematographer Hua Hui-ying. “Dragon Inn” is a gorgeous movie that gets a real showcase in this new digital transfer, featuring sharp image detail throughout and a subtle, naturalistic color palette. Looks fantastic, as expected from Criterion.

Audio:
The linear PCM mono audio track is crisp and does a fine job of snapping off those wooden percussive clacks that supplement the action scenes so wonderfully. No distortion or drop off is evident. Optional English subtitles support the Mandarin dialogue.

Extras:
The extras kick off with an interview (2018, 10 min.) with actress Shangkuan Ling-feung, who opens by explaining why she's conducting the interview in full martial arts costume. 'Cause she feels like it, that's why. She's quite a lively subject, delighted to share her honest impressions of director King Hu: “he had a very big head.” “Dragon Inn” was her film breakthrough, and she obviously remains very proud of it as well as the impressive career she built afterward. This is a lot of fun.

Criterion has also included an interview (2016, 11 min.) with actor Shih Chun, who also credits “Dragon Inn” with launching his career as the knight-errant of choice for discerning wuxia fans. He also discusses King Hu's fondness for the Peking Opera and its influence on the film.

In “Art In Action” (2018, 25 min.), author and critic Grady Hendrix analyzes a fight scene from the film, while also providing more background for the film, referring to “Dragon Inn” as “ground zero” for the modern action film, not just the wuxia genre.

Final Thoughts:
“Dragon Inn” certainly wasn't the first wuxia film, but it's a landmark blockbuster in the genre, as much as “Goldfinger” was to the modern action film. This is the second King Hu film in the Criterion Collection after “A Touch of Zen” (1971) and here's hoping it's not the last.

Posted by Christopher Long at 10:50 AM