Rocco And His Brothers


Fresh off the train from their tiny rural town in southern Italy, matriarch Rosaria Parondi (Katina Paxinou) and her four youngest boys are duly awed by their first glimpse of the big city of Milan. Riding a streetcar to visit eldest brother Vincenzo (Spiros Focas), they gape at the bustling urban nightlife: “Look at those shop windows, those lights. It's like daylight!”

Just as no battle plan survives contact with the enemy, any dreams of Utopian bliss are dispelled the instant mamma Rosaria stumbles into Vincenzo's engagement party, and promptly declares war on her prospective in-laws, including Vincenzo's fiancee Ginetta (Claudia Cardinale in one of her earliest roles). It all sounds like the set up for a comedic clash of cultures, even prompting Vincenzo to quip that his family arrived in town “like an earthquake,” but “Rocco and His Brothers” (1960) descends rapidly and inexorably into a tragedy of operatic proportions.

Director Luchino Visconti stated that where Federico Fellini told a tale of the “Sweet Life (La Dolce Vita)” his movie chronicled “the bitter life” of the Parondi family. He certainly delivered on his promise, or perhaps threat. Though Milan is booming from the country's recent “economic miracle” (one that left the south behind), the Parondi boys won't reap the rewards.

Ostensibly, their troubles begin when prostitute Nadia (Annie Girardot) explodes into their lives, first entering into a tempestuous relationship with the second-oldest brother, Simone (Renato Salvatori), then later with the titular brother, Rocco (Alain Delon). Both men, in very different ways, seek to control Nadia, while she struggles to maintain her autonomy. Like Nadia, Simone and Rocco ultimately sell their bodies as well, both achieving a degree of success in the boxing ring, while each paying a heavy price in the process. Savage passions ultimately pit Simone against Rocco, threatening to tear the Parondi clan apart.

The whole family struggles, though Simone's personal and moral collapse is the most dramatic and unnerving, as he transitions from the family's brightest hope to its blackest sheep, with faithful Rocco gamely trying to redeem him even long after he lurches well beyond the point of redemption. Both Visconti and his co-scripter Suso Cecchi D'Amico attributed Simone's downfall (and that of the other Parondi brothers) to the corruption of the big city and the exploitation of capitalism, but this is a dubious claim.

Simone arrives in Milan as a lazy, entitled, dishonest bully, and then becomes increasingly narcissistic, cruel, and violent. Rocco, described by his younger brothers as “a saint” with an infinite capacity for forgiveness, extends his tolerance exclusively to his own family, demonstrating little empathy for the brutally victimized Nadia, the alleged love of his life. Perhaps the Parondis weren't corrupted by Milan, but boarded the train with their own troubling set of patriarchal old-school “family values” already fully intact.

“Rocco and His Brothers” is a truly beautiful film, even when photographed amidst the squalor of Milan's seediest neighborhoods. Shooting in lustrous, moody black-and-white, the great cinematographer Giuseppe Rotunno dazzles from start to finish, from an early overhead still-life portrait of Milan's train station at night to a late tableau of uniformed workers filing into an Alfa Romeo factory after an afternoon break. In between, over nearly three hours, Rotunno's camera basks in soft Lombard sunlight and pierces inky nighttime shadows with equal precision and beauty, helping Visconti to achieve his vision of a neo-realistic film with an epic scope and feel. Oh, yeah, and the Nino Rota score isn't half-bad either. 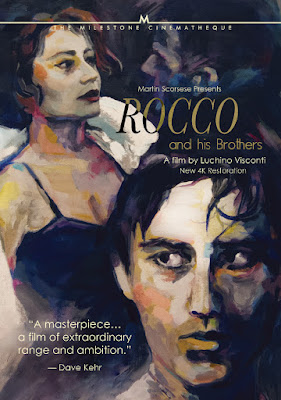 Video:
The film is presented in its original 1.66:1 aspect ratio.

The restoration process of “Rocco and His Brothers” was more elaborate than for many films. Parts of the original camera negative had been damaged by fungus, requiring some scenes to be replaced from a contact-printed interpositive. In addition, some scenes were censored after the film's debut at the Venice Film Festival in 1960, and these scenes appear in their unabridged version in this restoration, bringing the film back to its original 177 minute running time. The restoration was funded by Gucci and The Film Foundation, with color correction overseen by the film's cinematographer Giuseppe Rotunno.

The diligent restorers appear to have resisted the temptation to buff and polish the image to excess. This high-def transfer showcases a rich, thick grainy look throughout with a remarkable amount of detail visible even in the darkest shots. The black-and-white contrast is sharp and naturalistic throughout. In short, this restoration looks phenomenal.

Audio:
The monoaural track is crisp and consistent. The sound design is fairly straightforward, consisting mostly of the dubbed dialogue (French actor Alain Delon was dubbed by Achille Millo, if you're curious) and Nino Rota's score. I didn't notice any dropoffs or distortions in the soundtrack. Optional English subtitles support the Italian audio.

Extras:
As mentioned above, the film runs 177 minutes, so Milestone has devoted the first of the two Blu-rays in this set exclusively to the film, save for a brief (3 min.) introduction by Martin Scorsese. You can choose to play the movie with or without the intro. The second disc houses all of the other extras.

Most interviews with the children or grandchildren of accomplished filmmakers consist of affectionate remembrances with little in the way of substance. The interview (41 min.) with Caterina D'Amico, daughter of the great screenwriter Suso Cecchi D'Amico, is a noteworthy exception in the sub-genre. D'Amico, a teacher and author, provides a truly impressive level of fine detail in her no-nonsense interview, covering every aspect of the film's genesis, from Visconti's first sketch of the story to her mother's involvement as one of several writers on the project, to the array of influences from the Bible to Thomas Mann to Dostoevsky. She speaks authoritatively about major changes from the structure of the plot in its earliest form to what finally made it to the page and then to the screen. This is one of the best interviews I've ever watched on any disc in quite some time.

The disc also includes a series of shorter interviews (34 min. total) with cast and crew, including Annie Girardot and Claudia Cardinale, with the longest and most substantive segment belonging to writer Suso Cecchi D'Amico.

We also get several Outtakes (6 min. total) and a brief “Before and After” piece (2 min.) on the film's restoration.

Also, as is frequently the case with Milestone releases, you can visit their website for a comprehensive press kit (this one running over 60 pages) for more information on the film and its restoration.

Final Thoughts:
“Rocco and His Brothers” generated great controversy on its initial release, drawing condemnation and censorship from Catholic groups in Italy, and playing in even worse-butchered versions overseas. The controversy may have actually helped the film to box-office success, as it earned big money in Italy and gave Visconti a crucial international breakout that opened new financing opportunities that would shape the rest of his career. The film has also exerted a tremendous influence on generations of subsequent filmmakers, a list that just begins with Martin Scorsese (Simone is certainly a Raging Bull) and Francis Ford Coppola. And as if that wasn't enough, it also provides some of the earliest prominent performances for Alain Delon, Claudia Cardinale, and Annie Girardot, young actors who would go on to become major stars.

This Milestone release provides a sparkling restoration of this major landmark of Italian cinema, along with a solid collection of supporting extra features, making this one of the most important Blu-ray releases of the year.
Posted by Christopher Long at 8:32 PM