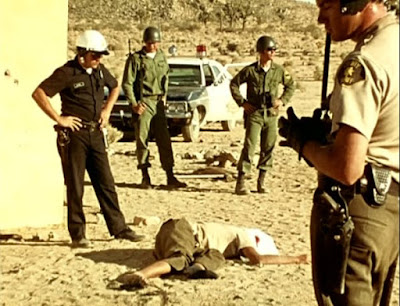 That's how writer/director Peter Watkins described his 1971 film on its release, so if you find the film disturbingly predictive of whatever time you first encounter it (for me, it was 2005, the rotten nadir of the W. Bush era), consider it evidence of Watkins' success.

In “Punishment Park,” released in the aftermath of the Kent State shootings, President Nixon has enacted emergency legislation that permits anyone deemed a threat to national security to be detained indefinitely at an undisclosed location where they will be tried by a military tribunal granted special powers during this temporary (i.e. permanent) time of crisis. The population is hyper-polarized, and tensions between authoritarians and so-called radicals threaten to tear the social fabric apart.

The film primarily follows the stories of two groups of prisoners: Corrective Group 637 and Corrective Group 638. The first group has already been tried, while the second group awaits trial. To be tried under this emergency tribunal is, of course, the same as being found guilty, but there's some good news! The government has kindly granted each convict a choice: face a lengthy sentence in a military prison, or spend three days in Punishment Park.

What is Punishment Park? According to the government, it's a training course essential for law enforcement to prepare to battle the ever-growing threat of domestic terrorism. For the members of Corrective Group 637, Punishment Park is simply hell. They must cross a course through fifty miles of California desert to reach an American flag at the finish line, all while being pursued by police who, allegedly, will arrest them peacefully and remove them from the course if they are captured. Things don't quite work out in such a (law and) orderly fashion.

Like many of Watkins' other films, “Punishment Park” is constructed as a pseudo-documentary. A British film crew, represented periodically by Watkins' off-screen voice, interviews both prisoners and officers. The crew is ostensibly on scene to serve as impartial recorders, but inevitably wind up enmeshed in events that spiral out of control. Cinematographer Joan Churchill deserves credit for a nimble, athletic performance as the camera zooms across the uneven desert landscape to keep up with the hectic action; keep in mind that was the pre-digital era and Churchill was toting a 16-mm handheld camera through the blazing heat day after day.

With the stated goal of providing a forum in which all sides could be heard, Watkins cast the film with non-professional actors who were encouraged to speak their minds in a largely unscripted affair. Passions burn hot, and the untrained actors sometimes reach a shrill pitch that allows for little to be heard aside from cries of “Pig! Pig! Pig!” but Watkins' choices allow for the venting of authentic anger that remains potent today, a record of a polarized nation that is both timely and timeless.

Watkins may have provided everyone a chance to speak, but he isn't shy about picking a side. The trial of Corrective Group 638 is revealed as a farce from the outset, with a ranting judge denying all objections and even ordering one defendant bound and gagged in court, a reference to Bobby Seale's treatment during the Chicago Seven Trial. Out in Punishment Park, the authorities resort to brutality so abruptly and so vigorously, it's difficult to view them as anything but the “fascist pigs” that protestors claim them to be.

Many critics at the time derided “Punishment Park” as absurdly alarmist, perhaps even irresponsibly so. Certainly, parts of the film seem overwrought, exacerbated by some amateur performances that feel awkward and stilted. As far as being absurdly alarmist or too over-the-top, well, I mean, I'm writing this in 2018, and literally while I was working on this paragraph, the president proudly proclaimed himself a “nationalist” to a cheering crowd, so, uh... 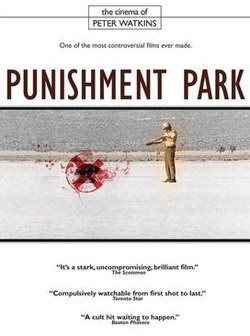 Video:
The film is presented in its original 1.33:1 aspect ratio. This low-budget film, produced for about $65,000, was shot in 16 mm and later blown up to 35 mm. Because of the blow-up, the image on this standard definition transfer from Project X/New Yorker Video is grainy and sometimes missing sharp detail, but the overall image quality is solid though, of course, a high-def upgrade would be welcome.

Audio:
The film is presented with a Dolby Digital Mono audio mix. The sound is efficient, if not very dynamic. Optional English and French audios support the English audio.

Extras:
The film is accompanied by a full-length commentary track by author Dr. Joseph A. Gomez.

In the lengthy Director's Introduction (27 min.), a deadly serious Peter Watkins discusses the production history of the film, and describes in crystal clear terms what he intended to accomplish with “Punishment Park.”

“The Forgotten Faces” (1961, 18 min.) is one of Watkins's earliest short films. He re-enacts the Hungarian Revolution of 1956 with an amateur theatrical group in Canterbury, and the finished product shares a lot in common with “Punishment Park.”

The disc also includes a text essay by media critic Scott MacDonald taken from the Spring 1979 issue of “Film Criticism” and you can also access the original 1971 press kit for the movie.

Final Thoughts:
In honor of Peter Watkins's impending birthday, I'm declaring this Watkins Week at DVDBlu Review. I'll be posting several reviews of DVD releases from the ProjectX/New Yorker Video series “The Cinema of Peter Watkins.” He's one of my favorite filmmakers, and he's certainly a unique voice in world cinema. I hope you'll get the chance to check out some of his work.

I wouldn't rate “Punishment Park” as one of Watkins' top movies (like the extraordinary “Edvard Munch” and “La Commune”), but it showcases his signature pseudo-documentary style (a description that fails to do justice to one of the few genuinely unique voices and visions in world cinema) and packs quite a force even at its most strident moments. “Punishment Park” was controversial enough in its day that it never secured a proper theatrical release, and was mostly shown on college campuses before all but disappearing from the public's attention. This 2005 DVD release was the first chance many American viewers had to see Watkins's work, and it's well worth tracking down if you can still find it.
Posted by Christopher Long at 1:34 PM