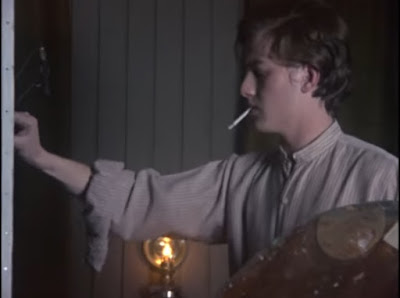 
A distant cliff with thick ridges running vertically down its face looms large on the screen. Rough, shadowy indentations pockmark the surface of this rocky landscape. Are we in the Alps? Maybe the Pyrenees? No, we're in the Oslo studio of Edvard Munch, and this craggy hillside is actually a close-up shot of the canvas on which Munch has built thick layer upon thick layer of paint. This topographic image is the culmination of a startling series of shots in which the increasingly frenetic artist paints, scrapes away, re-paints, re-scrapes, and nearly bores a hole through the canvas as he constantly revises his work. I cannot recall an instance in which the tactile elements of a painting have been captured so vividly on film, the scratch of a palette knife flensing away the excess paint further enhancing the effect. Then again, I have never seen a film quite like writer/director Peter Watkins' magnificent “Edvard Munch” (1974).

The film primarily covers a ten-year period from 1884-1893 (Munch from age 21 to 31), though it often returns to Munch's troubled childhood. Nineteenth-century Christiania (now Oslo) was plagued by disease, both of the consumptive and venereal strands, and the middle-class Munch family was not spared its blight. Edvard's mother, brother, and his beloved sister Sophie died when he was still a child, crippling losses that would haunt him his whole life.

In 1884, the young Munch (played by Geir Westby, who, like the rest of the cast, is a non-professional actor) belongs to a Bohemian intellectual circle led by Hans Jaeger (Kare Stormark). Jaeger's radical philosophy (a volatile mix of nihilism and anarchy) influenced Munch greatly, though Watkins contends that the painter's long-running, tempestuous affair with the mysterious Mrs. Heiberg (Gro Fraas) proved even more crucial in shaping the painter's life. The story progresses through Munch's formative years as a professional artist, and details his battles both with personal demons and external demons: the art critics of 19th-century Europe.

As in most of his other films, Watkins employs a pseudo-documentary style to recreate historic events, but “Edvard Munch” does not “blur” the lines between documentary and fiction so much as it ignores them altogether. Watkins narrates in a dry, formal voice that provides historical and political context, and all of Munch's dialogue is drawn from his diaries and correspondence. But the film is hardly a staid “just the facts” historical report. Indeed, “Edvard Munch” is one of the most stylistically innovative films I've ever seen, radical enough to stand alongside any avant-garde project.

The film leaps back and forth through time. The elliptical editing conveys Munch's emotional state rather than simply connecting events in a standard biopic structure. As Munch scrapes frantically at his canvas, we return to a moment when his sister Sophie is dying of tuberculosis. Sometimes characters talk directly to the camera, either speaking on their own or answering the questions of an off-screen female voice. This disembodied voice has no diegetic source, but it doesn't matter. The actors sometimes improvise their lines, responding with their own opinions rather than from Watkins' script.

All of these creative tools (discontinuous editing, direct address to camera, etc.) have been used in other art-house films as Brechtian devices, but Watkins isn't trying to distance the viewer. Though the film has a certain reflexive quality, this hodge-podge of techniques creates the eerie sense that we are peering in on events as they are happening, 20th-century eyes directly witnessing the previous century, and the movie has an immediacy and a sense of physicality that lend it great affective power. Watkins has created a unique cinematic point-of-view that I struggle to describe even a decade after I first watched it. A free-associative, semi-omniscient perspective which leaves open all possibilities at all times? Eh, I'll keep trying. Any shot needed to convey the subtlest nuance is fair game. In Watkins' art, there are no rules save those meant to be broken.

No subject is off-limits either. Though the film centers on Munch's life, sometimes its scope expands to cover life in 19th-century Christiania where the bourgeoisie thrive, but the working class suffer from wretched labor conditions and rampant disease. Watkins is too politically engaged to romanticize Munch as a solitary genius. The artist is not just a product of his mentors (including August Strindberg as well as Jaeger), but also his society. His lingering melancholia is not an artistic indulgence, but the logical response of a sensitive intellect to the squalor and inequity he witnesses every day (some scholars have suggested Munch suffered from bipolar disorder, a subject not touched on in the film).

Munch had a restless mind, and frequently transformed his style, leaping from impressionism to naturalism to expression and most points between; he also experimented with multiple media including lithography and woodcutting. His paintings were aggressive and shocking, and agitated viewers didn't quite know what to make of them. All of this alienated the staid art critics of the day who derided Munch's work, prompting him to move to Paris and later to Berlin, though we wouldn't find acceptance anywhere until later in his career.

I don't know how much Watkins identifies with Munch, but he has previously described himself as a marginalized director whose politically-charged films have been suppressed by media and corporations who prefer tamer, more familiar fare. At the very least, it seems likely that Watkins takes keen pleasure in depicting Munch's critics as preening dullards who treat any deviation from the norm as evidence of incompetence, dementia, or even moral perversion.

“Edvard Munch” is the best film I have ever seen about an artist or the artistic process. Unlike most art biopics, Watkins does not rely on cheap epiphanies (Jackson Pollock watches a toppled paint can drip on the floor and, voila, he's fully realized his new vision!) to neatly explain a messy story. Instead, we see that Munch achieved inspiration by three primary methods: work, work, and more work. Painting, scraping, painting, scraping, Munch never stops pushing on and on. And while Munch's story is inevitably one of anguish, the film also expresses the joy and pride a dedicated artist can take in the process of creation. “Edvard Munch” is nothing short of a masterpiece. 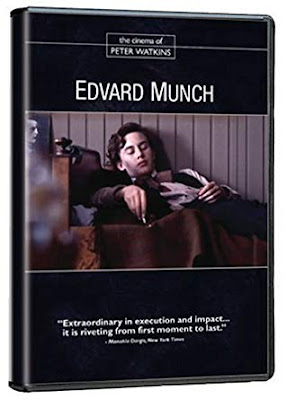 Video:
First, a brief explanation. Project X and New Yorker Video released “Edvard Munch” in two separate versions. The first single-disc release (from 2006) includes a shorter cut of the film (174 min.) and few extras. They later released (in 2007), a two-disc “Special Edition” (reviewed here) which includes the original full-length two-part cut of the film (220 min., an extra 46 min.) and several extras. One part is included on each of the two discs. For you real sticklers, the cover image I include below is of the first release. I couldn't find an image of the “Special Edition” cover but the only difference is that the cover includes the words “Special Edition 2-DVD Set.”

The film is presented in its original 1.33:1 aspect ratio. The film was originally shot on 16 mm. This digitally-remastered transfer inevitably looks very grainy and since the transfer is interlaces, you will see some instances of combing (boy, there's an old term from the pre-Blu-ray days). However, the image quality is solid enough, though I'd dearly love a high-def upgrade of this masterpiece.

Audio:
The DVD is presented with a Dolby Digital Mono audio mix. The sound quality is adequate. Optional English and French subtitles support the audio, which is mostly in Norwegian, though it some German, and Watkins' narration is in English.

Extras:
I suppose the 46 additional minutes could count as an extra compared to the first DVD release of the movie, but I strongly recommend viewers simply watch this complete version first before checking out the previous one.

The “Special Edition” includes three short extras about Edvard Munch. “Moments in the Life of Edvard Munch” (1957, 11 min.) and “The Munch Museum in Oslo” (1963, 10 min.) are short informational films that don't really add much to the main movie. “From Ekely, The City and the Artists” (1953, 12 min.) is much more interesting, providing a romanticized portrait of the artists' community in the suburbs of Oslo. It was filmed just seven years after Munch's death, and before construction of the Munch Museum.

A fourth short feature cuts together some of Munch's own silent-film recordings (6 min. total). They were shot on a 9.5 mm Baby Pathe and are quite blurry and probably of interest solely because Munch filmed them.

The “Special Edition” comes with a 56-page insert booklet. It includes a self-interview with/by Watkins as well as a full chapter from Joseph Gomez's book “Peter Watkins.”

Final Thoughts:
I think “Edvard Munch” is not only Peter Watkins' best film, but one of the greatest films ever made. I was even placed it in my all-time Top Ten. Your mileage may vary, but I suspect you'll at least agree that you've seen few movies like it, aside from other Peter Watkins movies, that is.

Project X/New Yorker Video released several Watkins films under the series “The Cinema of Peter Watkins” back in the mid-2000s, shortly before the Blu-ray revolution. I think it's one of the most exciting DVD series ever released, though more than a decade later, I now wish for Blu-ray upgrades for all of them. “Edvard Munch” is the crown jewel of the collection, but it includes many strong releases such as “The War Game and Culloden”, “Punishment Park”, “Privilege”, 'The Freethinker”, and more. They're all worth checking out.

Posted by Christopher Long at 4:14 PM