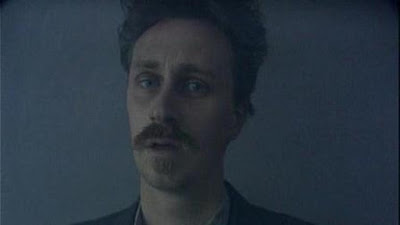 
Director Peter Watkins has spent a good portion of his career challenging media conventions. His films don't blur the line between fiction and non-fiction so much as they render the distinction irrelevant, at least for his work. When he employs documentary-like aesthetics in his historical fictions, he's not trying to pull the wool over anyone's eyes, but rather to create a unique mode of address that cuts through the artifice of mainstream feature filmmaking. Any technique is fair game. Watkins “interviews” working-class 18th-century soldiers as they prepare for the Battle of “Culloden” (1964) and invites the friends and lovers of “Edvard Munch” (1974) to address the camera directly. “The Freethinker” (1994) sees Watkins continuing to refine his idiosyncratic strategies in ever more complex and startling ways.

Watkins has never been shy about discussing the challenges he has encountered in getting his films produced and distributed. In order to shoot his script about the Swedish playwright August Strindberg (a project initially commissioned by the Swedish Film Institute in 1979), Watkins thought way outside the box, all the way to Nordens Folk High School in Biskops-Arno, Sweden, where the director and his students shot the film over two years as part of a video production course he taught. Watkins wrote the script, but encouraged his student cast and crew to improvise and collaborate, prompting this description in the closing credits: “The film is the result of collective work from 1992-1994... under the supervision of Peter Watkins.”

Even with the collective's contribution, “The Freethinker” still bears a striking resemblance to Watkins's masterpiece, “Edvard Munch.” Like that film, “The Freethinker” is nominally a bio-pic about a celebrated Scandinavian artist, in this case Strindberg. Like “Edvard Munch,” the film jumps around in time, has characters that directly address the screen, and employs virtually any technique needed to make each scene work. However, “The Freethinker” creates an extra layer of reflexivity beyond “Munch.” Anders Mattson, the actor who portrays Strindberg, functions on at least three narrative levels. First, he plays the character of Strindberg. Second, he acts as an odd kind of narrator as he reads excerpts from Strindberg's plays, referring to them as “Strindberg's” rather than “mine.” Third, he appears as a version of himself, an actor playing a role in a film.

The entire film also inhabits multiple narrative levels. In addition to more standard re-enactments of moments from Strindberg's life, we also see scenes from his plays performed as they would have been in late 19th century Sweden. The movie goes fully navel-gazing by portraying details of its own production, as well as in sequences of a more indeterminate nature, such as when a crew member appears on screen to interview Strindberg... or perhaps Mattson. Further still, Watkins sometimes breaks with his own words as printed on screen, often railing against the injustices of the world's mass media (and quite persuasively, even at his most hectoring.) At some points, critics even take center stage to comment on the film's treatment of Strindberg. Add in the film's complex chronological shifting (Strindberg “dies” with an hour left to go) and you have a heady experience like few other films.

It's an experience not easily digested in a single sitting. The movie runs over four-and-a-half-hours, but as with the lengthy director's cut of “Edvard Munch” (220 min.), every scene feels essential. Watkins takes the road seldom traveled by bio-pic directors, refusing to portray his artist as a lone genius, but rather as a product, and a conduit, of the social and political forces of his time. Strindberg the artist is also shaped by his most intimate relationships, particularly by the original Miss Julie, his first wife Siri von Essen (played by Lena Settervall). Watkins's eye for socio-political detail can be downright exhaustive at times, perhaps to a fetishistic degree. If you've ever wanted to learn about the development of print journalism in 19th century Sweden, then buddy, this is the movie for you.

The movie is shot on analog video, and that look had a distancing effect for me at first, but once I became accustomed to it, I was completely drawn in, as I am to virtually any Peter Watkins project. The movie's treatment of Strindberg is so rich and so finely-layered it has few parallels in cinema, save perhaps for “Edvard Munch” or, in the realm of fiction, Fassbinder's “Berlin Alexanderplatz.” At the same time, I'm not sure I can say I really got to know Strindberg particularly well. “The Freethinker” offers so much it reminds the viewer of the impossibility of understanding a dynamic personality and vision in the space of a mere four or five hours. 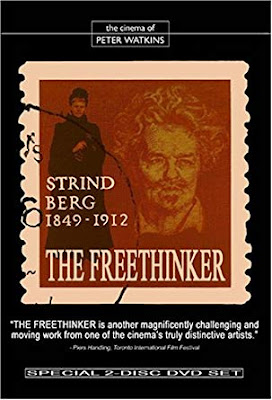 Video:
The movie is presented in a 1.33:1 aspect ratio. “The Freethinker” was shot on analog video (Beta SP) so the transfer can't do much to make it look great. Bright spots sometimes look overblown, and there's a dullness to the image that can't be helped. It ain't pretty, but you get used to it.

Extras:
Hey, the movie's over four hours. Even on two discs, there's no room for extras. The set does include a 16-page booklet with another self interview by Peter Watkins that's definitely worth checking out.

Final Thoughts:
“The Freethinker” is another great entry in “The Films of Peter Watkins” series from Project X/New Yorker Video. These titles may be hard to track down nowadays, and I haven't heard a whisper about any plans either to upgrade or re-release any of Watkins' movies on disc, but I'd hate for this series to wind up forgotten. I think Peter Watkins is one of the greatest and, perhaps, most unfairly overlooked directors of the past half century-plus, and the only way I can provide evidence for that claim is to point you movies like “The Freethinker” and “Edvard Munch.” And “Culloden” (1964). And “The War Game” (1965). Oh, and “La Commune” (2000), which I would include as one of the ten best films of the 21st century, if only I mistakenly believed that 2000 was the first year of the 21st century.
Posted by Christopher Long at 5:48 PM