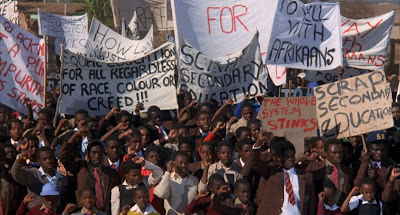 
Director Euzhan Palcy's “A Dry, White Season” (1989) focuses in part on the awakening of a man who has remained willfully asleep for years. Born and raised in South Africa, the middle-aged Ben Du Toit (Donald Sutherland) still maintains his unquestioned faith in the Apartheid system. In Ben's worldview, black South Africans might be poorer than whites, but everyone's treated fairly in the eyes of the law, and they're all pretty happy too. His black gardener Gordon Ngubene (Winston Ntshona) has been a family friend for years, and their sons even play together.

It will take a lot to shake Ben's blinkered confidence. When Gordon's son is picked up by police simply for being in the wrong place at the wrong time and then brutally caned, Ben feels bad but insists, “He must have done something.” When a police assault on protestors results in the boy's death, Ben is upset, but still believes an appeal to the authorities will ensure that justice is done “to the full extent of the law.” Ben will need a lot of convincing to accept that the system is inherently racist and corrupt, but eventually his eyes will be pried wide open.

Ben's ignorance is all the more astonishing for the fact that he's actually a history teacher, which doesn't leave really leave him much of an excuse. Even more astonishing is the fact that director Euzhan Palcy's story isn't better known because her journey to making “A Dry, White Season” is nothing short of remarkable.

Born and raised in Martinique, Palcy moved to Paris as a teenager to study film and literature. At the age of 25, she directed her first feature film, “Sugar Cane Alley” (1983), which became a major festival hit. Earning the admiration and support of film luminaries such as Francois Truffaut and Robert Redford, she relocated to America and soon drew attention from Hollywood studios.

Palcy rejected a series of studio projects in order to pursue her own, an adaptation of Andre Brink's novel about Apartheid abuses, “A Dry, White Season.” To research the project, Palcy traveled to South Africa incognito to secretly interview victims who had been tortured by the state. Palcy not only became the first black woman to direct a film released by a major Hollywood studio (MGM), she even convinced the legendary Marlon Brando to return to the big screen after a decade-long retirement to play a fiery anti-Apartheid lawyer who knows his case is lost before he ever gets to court.

Shot primarily in Zimbabwe and employing many South African actors, Palcy's film enrages almost from the start. The police don't hesitate to employ deadly force at the first sign of even a peaceful protest from black South Africans. Torture is their first line of interrogation, used not so much to gain information as to assert white dominance. The details Palcy uncovered in her investigation make this aspect of the film particularly harrowing.

Ben may become a crusader for justice after his blinders are removed, but neither his colleagues nor his wife and daughter follow in his footsteps. If they were willfully ignorant before, once confronted with evidence of state abuse, they don't change their minds at all. They simply don't care, treating Ben as a pariah, and even, in his wife's words, a traitor to his race.

It might sound like the story risks wandering into “white savior” territory, but Ben is never held up as a a paragon. Political activist Stanley (Zakes Mokae in perhaps the film's best performance) provides Ben access to the lives of black South Africans, but he makes it crystal clear he has his own agenda and isn't there just to teach the white man a life lesson. When Stanley hides Ben under a mat in the back seat of his car to sneak him into Soweto, there's no doubt who the outsider is.

Apartheid still reigned in 1989, and Palcy and several of her cast members put themselves at personal risk to craft this testament to the immorality and corruption of the entire system, one supported actively by virtually every white South African seen in the film. It's absolutely infuriating from start to finish, a record of unadulterated evil that viewers are unlikely ever to forget. 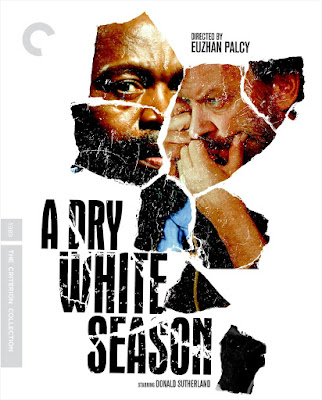 Video:
The film is presented in its original 1.85:1 aspect ratio. From Criterion: “This new digital transfer was created in 4K resolution on a Lasergraphics Director film scanner from the 35 mm original camera negative.” The 1080p transfer is sharp throughout and looks good in motion as well. It might be a bit shy of Criterion's top-of-the-line transfers, but the image quality is quite strong.

Extras:
The first extra is an interview of writer/ director Euzhan Palcy, conducted by critic Scott Foundas (2018, 35 min.) Palcy talks about her background and the heavy lifting she needed to do to get “A Dry, White Season” made at MGM. She's a very engaging speaker, and I found this to be one of the better director interviews I've seen in a while.

Palcy returns to analyze “Five Scenes” (29 min.) from the film, beginning with the early mass protest that ends in a police slaughter. Great stuff here too.

In 1995, Palcy met with South African President Nelson Mandela. Here, we get an excerpt (3 min.) from an interview she recorded with him in Johannesburg.

The disc also includes a short segment (5 min.) from a 1989 episode of NBC's “Today” show in which Bryant Gumbel interviews Donald Sutherland about the movie. And we also get a short (1 min.) video of Palcy receiving the 2017 Order of the Companions of O.R. Tambo, South Africa's highest distinction for foreign dignitaries.

The slim fold-out booklet features an essay by scholar and filmmaker Jyoti Mistry.

Final Thoughts:
I'm hardly an expert on the subject, but Euzhan Palcy's “A Dry, White Season” is the best film I've ever seen about Apartheid. As far as I know, this is the first Blu-ray release in North America of a film that surely deserves to be described as essential viewing. That's reason enough to call this one of the best Blu-ray releases of the year.
Posted by Christopher Long at 6:58 PM