A Story From Chikamatsu 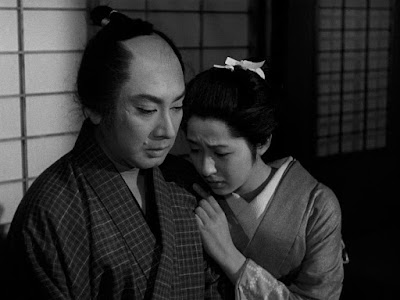 
Released just two years before Kenji Mizoguchi's death from leukemia at age 58, “A Story From Chikamatsu” (1954) shows the Japanese master continuing to experiment with form more than thirty years after his career began during the silent era.

The film adapts an 18th century play, but actually takes its name from the author, the celebrated playwright Monzaemon Chikamatsu who specialized in “double-suicide” stories, tragedies about doomed lovers. The doomed lovers here are Osan (Kyoko Kagawa), the much younger wife of a wealthy and cruel scroll merchant (Eitaro Shindo), and one of the merchant's apprentices, Mohei (Kazuo Hasegawa). An act of kindness by Mohei to help his master's wife out of a financial bind results in the two of them being forced to flee as fugitives. The penalty for adultery (a mere accusation will suffice) is a brutal one in this rigid law-and-order society, as one might glean from the film's alternate title in some countries, “The Crucified Lovers.”

In adapting Chikamatsu's play, Mizoguchi also incorporated some of the traditions of the bunraku theater (a form of puppet theater) in which the playwright often worked. Though there is a scene where Mohei cradles Osan at his side to lift her over a stretch of muddy water, it would be an exaggeration to say Mizoguchi directs his actors just like puppets. However, in many scenes, the actors' movements are tightly controlled, with a relatively distant camera situating them against the backdrop of the stage.

The shooting style doesn't really mark a major departure for Mizoguchi, always known for his long takes and lack of close-ups, but the film's sound design, borrowing heavily from theater, is more radical. Wooden clappers pound out an intense rhythm, sometimes banging loudly enough to jar the listener. Metallic clangs and insistent drums fill out the heavy percussion, accompanied by the more familiar plucked strings of the shamisen. The score (credited to Fumio Hayasaka, Tamezo Mochizuki, and Enjiro Toyosawa) draws enough attention to itself to be as prominent a feature as the narrative or the actors themselves. I'll leave it to real experts to determine exactly to what degree the music replicates the traditions of bunraku theater.

Mizoguchi combines these creative elements to depict a merciless society ruled by a disciplinarian ethos, where “justice” is determined exclusively by power and class. The slightest infraction is deemed punishable by death, and the lower-caste victims have internalized their oppression so much that they deem it a matter of honor to sacrifice themselves for the good of the rulers. In one of the most poignant scenes, Mohei's father expresses his deep contempt for his son's violation of the societal code, though he is not without compassion. The story revolves around a series of abuses and betrayals, but empathy and love transform the inevitable tragedy into a personal triumph of sorts, the only kind of victory the players can earn in a rigged game. At least, in the end, they will achieve the very thing every force in society conspired against: they will be together. 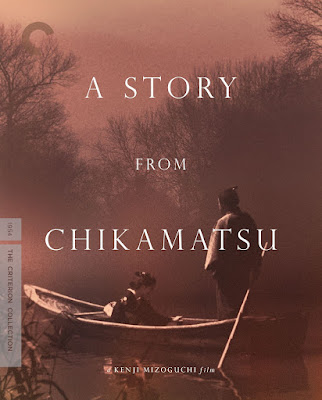 Video:
The film is presented in its original 1.37:1 aspect ratio. This “new 4K digital restoration” looks very sharp throughout with strong contrast in the black-and-white image. I feel like I wind up saying more or less the same thing with every Criterion high-def presentation of black-and-white films, but there's not much else to say. It looks great, with very little visible damage in this 60-year-old film.

Audio:
The LPCM mono audio mix is sharp and seems to do a fine job of presenting the distinct sound mix of this film, capturing all of those percussive beats at their sharpest. Optional English subtitles support the Japanese audio.

Extras:
The extras here are fairly slim for a Criterion release.

First up is a new interview (11 min.) with actress Kyoko Kasawa. Kasawa had already played the noble, sacrificing sister Anju in Mizoguchi's magnificent “Sansho TheBailiff” (and also appeared in Ozu's equally magnificent “Tokyo Story”) but she describes “Chikamatsu” as the first film in which she really learned the craft of acting.

We also get a lengthy video essay (2018, 41 min.) by film scholar Dudley Andrew, who focuses on the ways in which “Chikamatsu” is influenced by bunraku theater, though he also touches on a variety of other subjects.

Final Thoughts:
“A Story From Chikamatsu” is the ninth Mizoguchi film in the Criterion/Eclipse collection. It may not have as high a profile as titles like “Sansho the Bailiff” or “Ugestu” but it's a late-career gem from one of the greatest directors. The extras are on the slim side, but still engaging, and the restored high-def transfer is excellent.

Posted by Christopher Long at 11:20 AM