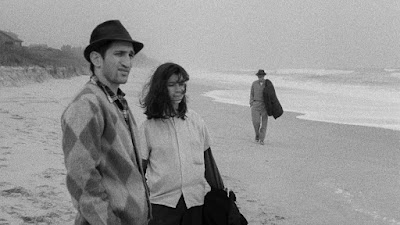 
When I first watched writer/director Jim Jarmusch’s breakthrough hit, “Stranger Than Paradise” (1984), many years after its original release, my first thought was “So that’s all?” I wasn't expressing disappointment. Rather, I was amazed that such a Great Film (caps intentional) could be made from so little raw material. Three characters, a handful of no-budget locations, and only the most tenuous of narrative threads, so diffuse it could barely be considered the force that propelled the film. No flashy camera tricks either. The entire movie is built on a deceptively simple visual rhythm: a series of long unedited takes interrupted by black leader; no post-production editing (aside from the black leader inserts between the long takes), and only minimal camera movement save for a few long tracking shots. The characters don't do a damned thing except sit around the apartment, watch TV, bitch, and play cards. Critic Pauline Kael dismissed them as “dead end kids.”

But “Stranger than Paradise” was hardly a dead-end film. It rocketed Jarmusch to instant fame (though not big financial success) and became one of the defining touchstones of '80s American independent cinema. Arriving on the heels of the first great wave of Hollywood mega-blockbusters, it proved a rallying point for audiences and critics desperate for something without aliens, Nazis, and big explosions. When Geoff Andrew wrote his book on American independent film in 1998, he titled it quite simply, “Stranger than Paradise.”

The film is separated into three sections or episodes - you can’t really call them acts. “The New World” begins with the arrival of Eva (Eszter Balint) in New York, fresh from Hungary. She is supposed to spend some time with her Hungarian cousin Willie (the laconic John Lurie, saxophonist and co-founder of the Lounge Lizards) before moving to stay with family in Cleveland. Willie aggressively denies his Hungarian heritage and therefore has little interest in his cousin from the old world. That’s OK, Eva doesn’t have much interest in him either. Willie’s friend Eddie (Richard Edson, the original drummer for Sonic Youth) plays the third wheel, dropping in from time to time like an '80s Ed Norton just to poke around and see what’s happening. Of course, nothing is ever happening. He’s the most gregarious of the three slackers, eager to buoy everyone’s spirits. When Eva mentions she is going to Cleveland, he offers his wisdom, “Cleveland, it’s a beautiful city. It’s got a big, beautiful lake. You’ll love it there.” Eva: “Have you been there?” Eddie: “No.”

“One Year Later” sees the two boys, still just hanging out in New York, steeped in hot water over a poker game gone wrong, prompting them to flee the big city to visit Eva in Cleveland. She's getting her taste of the American dream, working at the world's most desolate hot dog joint. Life in Cleveland isn’t much different for the mismatched group. They hang around at home, watch TV, bitch, and play cards. Except this time Eva and Willie’s very Hungarian Aunt Lotte wins every hand, declaring each time: “I am de vinner.” (Note: this is the best-delivered line in the history of cinema, and Aunt Lottie is the greatest supporting character ever. This is proven fact, you can look it up.) Even the less-than-philosophical Eddie is moved to comment on the generic similarity of their new home: “You know it’s funny. You come some place new and everything looks just the same.”

In “Paradise”, the final episode, the intrepid trio trundles down to Florida (Eddie: “Florida? It’s beautiful down there.” Willie: “You ever been there?” Eddie: “No.”) to see the gleaming white beaches and get rich betting on the horses. Here the ennui that glues these strangers together begins to lose its magnetic power, though Jarmusch saves a hell of a punch line for the end when, by sheer luck, Eva discovers the true American dream on a deserted beach road. If the film has any message, it’s this: The Puritan work ethic is a total mug's game.

The performances by the three leads are all magnificent, a testament not only to their abilities but to Jarmusch’s fondness for his actors. The long takes, so beautifully orchestrated by cinematographer Tom DiCillo, grant everyone time and space they need to let their personalities shine through. Lurie and Balint get plenty of much deserved credit, but Richard Edson lights up the screen whenever he's in frame. His range of bemused expressions is seemingly endless, and one of the film’s most reliable sources of laughs.

“Stranger Than Paradise” has plenty of laughs. It's one of the funniest movies I’ve ever seen, though I don’t recall laughing out loud on a first viewing. Jarmusch and his cast create a world that invites you to return again and again, to discover a previously unseen pleasures or even just to revisit some of your favorite people and places. Now that I know Eva so well, I can’t stop from breaking up every time she cranks up Screamin’ Jay Hawkins’s “I Put A Spell On You” and takes a long, slow walk down the oddly deserted streets of the Big Apple. And Willie and Eva’s conversation about American TV dinners gets funnier every time I see it, or even just think about it. Like right now.

Is that all there is? You bet, and it’s more than enough. 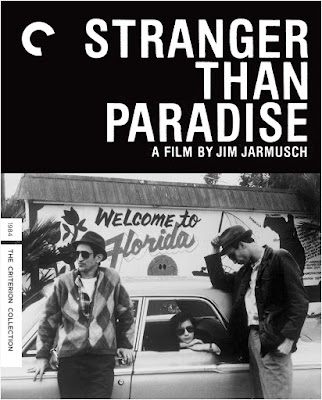 Video:
The film is presented in its original 1.78:1 aspect ratio. The movie (or at least the first part) was literally shot on leftover film stock, and has always been defined by its grubby, grainy, low-budget look. This high-def transfer preserves that quality while providing a sharper image than previous SD releases, with an uptick in the black-and-white contrast as well. It looks... like it should look.

Extras:
Criterion has imported all of the extras from their previous 2-disc DVD release, though now all included on a single Blu-ray.

Criterion has provided one addition, however, now including the 1996 commentary track by Jim Jarmusch and Richard Edson, originally recorded for the laserdisc release. It's insightful and funny and eccentric, just like you'd expect.

The other features are all from the previous SD release.

The major extra on the disc is a whole extra film, Jarmusch's first feature “Permanent Vacation” (1980). Jarmusch shot “Vacation” while he was a student NYU, but didn't graduate because his thesis assignment was to make a short, not a feature. He appears to have done well despite the academic snafu. “Permanent Vacation” is essentially a character study, or rather a character observation, of Allie Parker, an aimless dreamer and drifter who bears a striking resemblance to its lead actor, Chris Parker, then a friend of Jarmusch’s. Allie has tuned in and dropped out, with an emphasis on the dropped out part, and spends most of his time wandering around the city, ever so vaguely searching for some meaning in life, and also digging on Charlie Parker (no relation). “Permanent Vacation” is not a masterpiece by any means, and has all the soft edges and awkward spots of a debut film, but it’s still mesmerizing in its own monotonous way. Tom DiCillo also filmed this one.

Kino ’84: Jim Jarmusch” is a 1984 documentary (41 min.) shot by Martina Müller for German TV. The documentary consists mostly of clips from Jarmusch’s first two films, and interviews with him and the cast and crew members. I enjoyed this one quite a bit. Jarmusch has always looked and sounded the same. It's kind of creepy, actually.

“Some Days in January” (1984) is a short (14 min.) silent Super-8 film shot by Tom Jarmusch, showing some on-the-set footage of the cast and crew at work.

The insert booklet reprints the content from the prior booklet. It features Jarmusch’s “Some Notes on Stranger than Paradise,” released with the press kit for the film in 1984. It influenced quite a few of the film’s initial reviews. The booklet also includes essays on “Stranger” by Geoff Andrew and J. Hoberman, and one on “Permanent Vacation” by Luc Sante.

Film Value:
Not everyone loved “Stranger than Paradise” when it came out. One rather hostile French critic observed that Jarmusch was 33 years old at the time, the same age when Jesus was crucified, and wished fondly for the safe fate to befall the filmmaker.

However, the film was a smash hit in its New York engagement (though hardly anywhere else) and became a critical darling in short order. Jarmusch’s career was launched, and he found himself at Cannes with his next film, “Down By Law” (1986). Jarmusch almost instantly became one of the defining figures of American independent film, and still holds a similar revered status 35 years later.

“Stranger Than Paradise” is achingly funny, incisively bittersweet, and truly one of the great American films of the past quarter century. This Blu-ray re-release only adds one extra (the 1996 commentary) to the previous SD release, but the high-def transfer is certainly a major selling point for anyone considering a double dip.
Posted by Christopher Long at 1:37 PM