Starting as a Bruce Lee imitator in the early '70s, then briefly flirting with Hollywood, Jackie Chan entered the 1980s looking to forge his own distinct on-screen identity in Hong Kong cinema. “Police Story” (1985) wasn't the first box office success for the prolific actor and director, but it was perhaps the first time the character that fans still think of today as the definitive Jackie Chan fully crystallized.

It was a difficult balancing act that took time to perfect because Chan was trying to fuse two disparate elements into a convincing and compelling persona. On the one hand, Chan's signature character is supernaturally graceful (simply directing traffic in “Police Story 2” he performs like a ballet dancer) and not at all shy about flaunting his mad skills. On the other hand, he's also a working class Joe just like his target audience, and a serial schmuck who can win any fight, but lose at just about anything else in life. He'll bob and weave and kick his way to victory through a gamut of a dozen pipe-wielding hoods, then take a birthday cake in the face, tossed by a girlfriend who is absolutely sick of his bullshit.

This seemingly paradoxical creation connected with fans throughout the world (though box office success in America would prove elusive for a while) and justifies the frequent comparisons made between Chan and silent comedy stars Buster Kearon and, especially, Harold Lloyd. Lloyd's Glasses character could sell himself as a klutz while also dancing deftly through obstacle sources, and as a social outcast who was still inevitably going to win the day and, of course, the girl. Chan upped the action and downplayed the romance, but his connection to Lloyd is undeniable, and was directly acknowledged when Chan himself dangled high above ground from a giant clock face in “Project A” (1983), sixty years after Lloyd rewrote film history by doing the same in “Safety Last!” (1923)

In “Police Story,” Chan plays Ka-kui, a rank-and-file Hong Kong police officer assigned to protect Salina Fong (Brigitte Lin), a secretary to and now key witness against crime lord Chu Tao (Chor Yuen). It's a thankless job (it only pays an extra $32 a day!) but Ka-kui has himself to blame. Chu Tao is only on trial because Ka-kui spearheaded a daring, reckless police sting targeting Chu Tao that also, by happy coincidence, wound up destroying an entire shanty town and also led to all of the big boss's henchmen being flung headfirst out of a bus window. Ka-kui has his own style, you see.

Chan directed and also co-wrote (with Edward Tang) “Police Story” and he relies heavily on comic relief to remind viewers that Ka-kui is no superhero, no matter how brilliantly he fights. Much of the comedy revolves around a series of ongoing misunderstanding with his girlfriend May (Maggie Cheung, two years removed from her beauty pageant days, and just at the start of a career that would make her one of the great international art-house stars of her generation.) Some of these scenes are tedious, others quite charming, with Cheung proving her own moxie in a few stunt scenes, including one where Ka-kui plucks her right off a moving moped and drops her on the street. An accident, of course.

Chan's characters make ingenious use of their environment, transforming innocuous objects into game-changing weapons or, at times, comic fodder. A snatched umbrella proves the key to Chan's jaw-dropping, physics-defying pursuit of an escaping bus. One of the best comedy sequences sees Chan gliding around the police station in a wheeled office chair, answering every phone and getting completely tangled up in the cords, a bit in which he once again finds a way to appear both inept and in total control of an elaborately choreographed routine.

“Police Story” climaxes with one of the great set-pieces in action film history, as Ka-kui takes down the entire crime gang one-by-one and, in the process, obliterates a helpless shopping mall. You've never seen so much shattered glass, the flying shards lovingly rendered in slow-motion. The piece de resistance is Chan's spiral down a giant pole covered in Christmas lights, a stunt so nice they play it thrice, making the canny judgment that viewers couldn't care less about have any so-called spell broken as long they get to see this impossible feat yet again. If you're curious, yes, Chan did burn himself badly in the process. Which only makes it that much cooler in Jackie Chan's universe.

Second-degree burns didn't keep Chan and Ka-kui from returning in “Police Story 2” (1988) with the same chief bad guy, now with a few different assistants. Cheung also returns as May, and gets some better comedy bits, including a hilarious sequence where she hectors poor Ka-kui all the way into the men's locker room at the police station, her righteous fury preventing her from noticing the men in various states of undress cowering to hide their embarrassment.

The sequel delivers most of the same goods, and if it doesn't end with anything quite as brilliant as the mall demolition from the original, viewers are treated to the best one-on-one fight in the series, when Chan squares off against Benny Lai, playing a mute henchman who hurls firecrackers in between kicks. Lai, like most of the supporting actors in the film, was a member of the Jackie Chan Stunt Team, the daredevil unit that has gone through multiple generations now, crucial players in the creation of one of the greatest movie stars of the modern era. 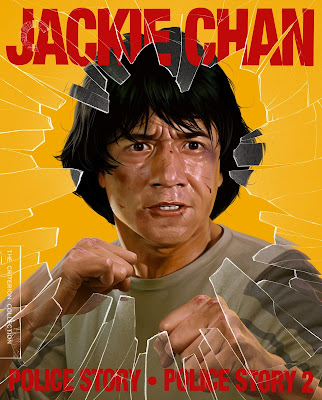 Video:
Both films are presented in their original 2.35:1 aspect ratios. From the Criterion booklet: “These new 4K digital restorations were undertaken by Fortune Star Media Limited at L'Immagine Ritrovata in Bologna, Italy. New digital transfers were created from the 35 mm original camera negatives on an ARRISCAN film scanner.”

The high-def transfers present a strong, grainy image, no doubt much better than most viewers were used to on a series of low-end home releases over the years. Both of these films were released several years ago on Blu-ray by Shout Factory, and I don't have that set to compare this to. I can't imagine any fans being disappointed by the quality offered by Criterion, though.

Audio:
Both films are presented in lossless mono audio mixes. The sound design isn't exactly complex or crucial here, and the cheesy '80s score is just as cheesy with a souped-up mix. But you get to hear Jackie Chan sing the theme song, so you might as well hear it the right way. Optional English subtitles support the Cantonese audio.

Extras:
“Police Story” and “Police Story 2” are housed on separate Blu-rays in this 2-disc Criterion set, with extras included on each of the discs.

Disc One's supplements begin with “Jackie Chan: My Stunts” (64 min.), a documentary showing Chan on set putting together some of his elaborate stunts, along with clips from his earlier movies. The English narration is bland and irritating, but otherwise this feature gives viewers a glimpse of the exhaustive amount of work required to stage even a short fight scene.

We also get an interview with director Edgar Wright (2019, 13 min.) in which he mostly name-drops the various Chan films he loves the most. This supplement is accompanied by an episode of “Talkhouse Podcast” (36 min.) from Oct 12, 2017, a conversation between Wright and Chan. I do my best to be thorough when reviewing these releases, but I draw the line at listening to a podcast. I'm sure it's wonderful.

In “Becoming Jackie” (16 min.), author and programmer Grady Hendrix traces Jackie Chan's on-screen history, focusing on his development of the modern film persona that has made him a global superstar.

The disc also includes an undated Jackie Chan interview (19 min.) in which he talks about how he begins by planning the fights, then develops the script around them – another similarity to Harold Lloyd, whose writing team usually built from the gag-level up. We also get a short excerpt from a 2017 Hong Kong TV show (12 min.) in which Jackie Chan has a tearful reunion with the members of the Jackie Chan Stunt Team, the old-school originals as well as younger ones- Chan sings the “Police Story” theme song along with his colleagues. An original theatrical Trailer and the Janus re-release trailer round out the offerings on Disc One.

Disc Two offers the Hong Kong Release Version of “Police Story 2” which was whittled down from 122 minutes (the main release on this disc) to 105 minutes. It's in high-def, but the transfer isn't as polished as the main feature.

Grady Hendrix returns for another discussion (21 min.), this time focusing on how Chan “reinvented” action in the '80s, his emphasis on “showing his work” to viewers, and even the subtle wire work employed in his films.

Criterion has also included an episode of “Son Of The Incredibly Strange Film Show” (41 min.), a BBC series hosted by Jonathan Ross, which goes on location to Hong Kong to talk with Jackie Chan and Maggie Cheung, and to run clips from Chan's films.

We also get an undated interview with Benny Lai (15 min.), who gets to play a great villain in “Police Story 2” along with a short Stunt Reel (5 min.) that shows some highlights and bloopers from Chan's films.

The collection wraps up with a Trailer (4 min.) and a short feature (5 min.) about the Peking Opera. The footage is from a 1964 French TV show, so no Jackie Chan, but it shows clips of the exhaustive training he would have gone through.

The fold-out insert booklet includes a fantastic essay by Nick Pinkerton. Really, it's great. I could have just pointed you to this instead of writing a review, but I'm supposed to do some work.

Final Thoughts:
Whether or not “Police Story” and “Police Story 2” are Jackie Chan's best films (Chan fans have, to say the least, strong opinions about their favorites), Ka-kui is undoubtedly one of his best-known and best-loved characters, and a sterling example of the persona he perfected by the end of the 1980s. Criterion has provided both films strong high-def transfers, and a wide array of supporting supplements. An if this set sells well, maybe we'll get some more Jackie Chan films in the Collection.
Posted by Christopher Long at 12:09 PM