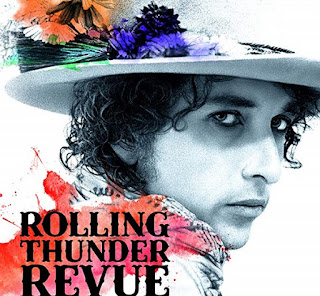 
Martin Scorsese is in a playful mood. He opens his (or is it really his?) newest movie with an excerpt from silent-film pioneer Georges Melies' “The Vanishing Lady” (1896), in which the illusionist-filmmaker delivers on the title, making a seated woman disappear and reappear through the magic of editing.

Why start a Bob Dylan documentary (or is it a documentary?) in 1896 France? The cheeky answer is that Scorsese just likes Georges Melies, but that doesn't make it a bad answer. It's a direct reference to Scorsese's “Hugo” (2011) in which Ben Kingsley portrayed Melies, which raises the possibility that Scorsese has issues of authorship in mind. Starting with a wink and a nod to your own work is an efficient way to impress your auteur stamp on a film that consists primarily of footage of other artists' work.

Choosing this specific Melies clip also serves as Scorsese's promise to deceive, and therefore to entertain, by any cinematic means at his disposal. He makes the promise clearer by transitioning directly from the Melies clip to the word “Conjuring” in bold blue letters, hovering alone on the screen for a beat before he adds the words “The Rolling Thunder Revue” right under it. Revue then becomes Re-vue, and is finally completed by the subtitle “A Bob Dylan Story by Martin Scorsese.” So much to keep track of and we haven't really even started.

You probably get it by now. Netflix might call this a documentary, but it's a story, and a story by a guy who loves to play tricks, so be careful what you believe. The ostensible subject of said story is the Rolling Thunder Revue, a barnstorming rock tour through both small towns and big cities in America and Canada in 1975 and 1976, spearheaded by Bob Dylan but featuring a dynamite troupe including Joan Baez, Joni Mitchell, Roger McGuinn, and many others. Poet (and sort-of aspiring musician) Allen Ginsberg even hitched along for part of the ride, and is feature at length here.

The film mixes interviews (mostly new, some archival) with concert and behind-the-scenes tour footage. Unsurprisingly, Dylan is the chief talking head, but, also unsurprisingly, he's not all that helpful, claiming not to remember a thing about the tour because “it happened so long ago, I wasn't even born.”

Sure, Bob. Dylan is still wearing a mask, just like he did while performing at many stops on the tour, either an actual mask or thick white face-paint. Scorsese is quite enamored of the mask as a running theme, cutting in random footage of masked film performers. This also explains why Scorsese introduces us to Stefan van Dorp, the enigmatic and pompous European filmmaker who shot all the concert footage and is delighted to brag today about his crucial role in the project. We'd probably tolerate his vanity better if he wasn't an entirely fictional character played by performance artist Martin von Haselberg and serving, perhaps, as a mask worn by Scorsese – note that Van Dorp is credited simply as The Filmmaker. Did Scorsese cast him just because his name is Martin too? Sounds good, let's print it. ("It's all true!," bellows an angelic Orson Welles from a steakhouse high above.)

Viewers may or may not realize which of the talking heads are fictional, though film buffs should figure out that something's up once we start hearing from former Senator Jack Tanner (Michael Murphy). What's clear is that there isn't a chance in hell we're going to get to know the “real” Bob Dylan or even the “real” Scorsese, and it doesn't really matter.

I won't claim to be certain exactly what all of Scorsese's chicanery accomplishes. It may frustrate some viewers who wind up feeling betrayed when, to take one example, they find out that story about Dylan hooking up with a teenage Sharon Stone might not actually be totally, entirely, completely true. For me the various contrivances and misdirections serve as a reminder that, when dealing with artists, all we can rely on for certain is the art itself, and boy does “Rolling Thunder Revue” deliver on that front.

At the twenty-minute mark, Dylan launches into a performance of “Isis” that absolutely rips the roof of the house, with Scarlet Rivera ripping it up on violin (she's amazing throughout the film). It's some of the best concert footage I've ever seen, and it's just the beginning. We get a knockout version of “When I Paint My Masterpiece” and, oh man, the most amazing “A Hard Rain's A-Gonna Fall” you've ever heard. Just one molten hot number after another, peak Dylan beyond what I previously thought his peak was. Any skeptic who has ever sniped, “But Dylan can't sing!” can watch this movie and then kindly please never speak on the subject again.

It's breathtaking at its best, but is this Martin Scorsese's movie or Bob Dylan's? Trick question, because the real answer is that now it's yours.
Posted by Christopher Long at 6:42 PM