The Spy Behind Home Plate 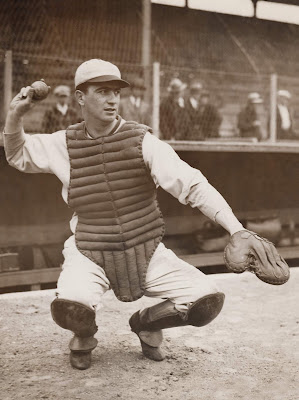 
There may be no more common commodity in the history of baseball than the backup catcher who can't hit a lick. Catching's hard work and every team needs some poor shnook who can give the real catcher a rest once a week. Just flash the right signals, tell the pitcher “Attaboy!” every few innings, and try not to ground into a double play every time up. OK, maybe the job's a bit tougher than that, but the point is that expectations are generally pretty modest, and every team churns through a vast and mostly interchangeable supply of supporting players over the years.

The rare balsa bat backstop who becomes a legend, though, is someone to cherish. Baseball fans throughout the land still venerate the great Bob Uecker, proud owner of a .200 career batting average. Uecker's only big hits were against himself: “I had slumps that lasted into winter” and “When I looked to the third base coach for a sign, he turned his back on me.” Uecker parlayed his futility into a thriving brand that extends from the broadcast booth to Miller Light and even “Mr. Belvedere.”

Catcher Moe Berg also couldn't hit and boy could he not run. He spent most of his 15-year major-league career (starting in 1923, ending in 1939) on the bench, and never snagged his own sitcom or even a beer commercial. So why are we still talking about him today? Well, there was that time he almost assassinated Werner Heisenberg...

But let's start at the beginning, since that's what director Aviva Kempner does in her new documentary “The Spy Behind Home Plate” (2019). Moe Berg was born in 1902 in Harlem to a working-class Jewish family. His father Bernard was a self-made man, a pharmacist who mapped out futures for his children as doctors, lawyers, and teachers. Baseball player was definitely not on the list of acceptable careers, and Bernard never changed his mind about the disreputable nature of the game, not even when baseball helped open the doors to a Princeton education for Moe at a time when few Jews were admitted to the Ivy League. Heck, not even when the major-league Brooklyn Robins came calling for young Moe's services with the idea of appealing to Jewish fans in New York.

Kempner's film brings young Moe Berg to vibrant life in these early segments, portraying him both as a rebel in his own family and as a pioneering Jewish athlete, who combined brawn, carefully groomed good looks, and brain. And oh what a brain. I don't want to traffic in lazy stereotypes about the intellectual capacity of professional athletes, but it's safe to say that only a few baseball players ever learned how to speak Sanskrit. As well as French. And German. And Hebrew. And Latin. And Yiddish. And Russian. And... Well, as one of his fellow players quipped about Berg, “He spoke a dozen languages. And couldn't hit in any of them.”

Berg's inability to grasp a bat as effectively as foreign syntax didn't prevent him from gaining a considerable reputation in the game for his glove and his savvy, a reputation that would assure him a decade and a half on an active roster even though his managers seldom saw fit to play him in an actual game. It also netted him a spot on the All-American team sent on a good-will tour of Japan in 1934, alongside luminaries such as Jimmie Foxx, Lou Gehrig, and Babe Ruth.

Berg used the long cruise to brush up on his Japanese and also to hit on Ruth's 18-year-old daughter, Julia. He also brought along a hand-held Bell and Howell camera which provides us our first answer as to why we're still talking about the kid who couldn't hit. Berg remained in Japan for a while after his teammates returned to the States, and while exploring, he also took some rather interesting footage of the countryside which he found a way to sneak home past vigilant authorities. Don't ask how.

Said footage may or may not have proven instrumental in U.S. war efforts in the following decade, but it definitely provided a glimpse of things to come. After Berg's playing career finally petered out in 1939, he soon began a surprising second career, as an agent for the newly formed OSS, the predecessor to the CIA. Details about Berg's spy career are understandably hazy and difficult to confirm, but he was involved in investigating Germany's efforts in atomic weapons development, which ultimately led him to attend a lecture in Zurich given by German scientist Werner Heisenberg. Berg arrived with a notebook in hand and a gun in his pocket, prepared to complete his mission by whichever means he deemed necessary. Spoiler, he wound up befriending Heisenberg. Moe just had a way with people.

Berg's unlikely secret agent career sure sounds exciting, but the film loses focus during this section. The unique and inspiring story of the multi-lingual, working-class Jewish athlete and scholar who embodied the American success story transforms abruptly into a broad-reaching lecture about the World War II spy program. Key players like William Donovan (head of the OSS) are introduced to provide context, but in the process Berg is reduced to a supporting player of uncertain significance in the grander scheme.

The generic nature of the WW2 section prevents “The Spy Behind Home Plate” from being as successful as Kempner's previous documentary about a Jewish baseball star, the fantastic “The Life And Times Of Hank Greenberg” (1998). But in her new film, Kempner still constructs a vivid portrait of a charismatic figure with no real equivalent in baseball history. You really can't go wrong with a Sanskrit-speaking Jewish athlete and spy who is still a disappointment to the father who just wanted him to become a lawyer. Oh, by the way, Berg graduated from Columbia Law School too, just as a side gig. Which might explain why he didn't have any free time left to take a few hacks in the batting cage.

If you want to learn more about Moe Berg, I strongly recommend Nicholas Dawidoff's 1994 biography, “The Catcher Was A Spy.”
Posted by Christopher Long at 9:29 AM