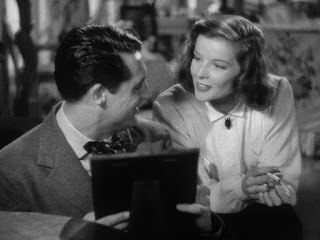 
Recently engaged after a whirlwind romance while on vacation, Johnny Case (Cary Grant) takes the bold step of actually visiting his fiancee at her New York home, just to get to know her a bit. Johnny accidentally shows up at the servants' entrance around back in the kitchen, a particularly disorienting faux pas since he had no idea his fiancee lived in the sort of home that had a servants' entrance. Not to mention majestic spiral staircases and even an elevator that travels at least four floors.

It seems Johnny didn't ask many questions about his betrothed Julia Seton (Doris Nolan) who turns out to be a member of THE Setons of New York, an upper crust family with a fortune built on Wall Street success. Soon, he will be rigorously vetted by the family patriarch (Henry Kolker) and you can guess from his early identification with the maids and butlers that Johnny will have some trouble passing muster. After all, he is from Baltimore.

“Holiday” (1938), adapted from the blockbuster 1928 Philip Barry play, declares its concerns with class from the outset. However, birth is not destiny here, and Johnny finds some allies within the family, chiefly in the form of Julia's free-spirited older sister Linda (Katharine Hepburn). Unlike her sister, Linda is keenly aware of her privilege and quite embarrassed by it, not to mention bored by a rudderless life in which she wants for nothing and is therefore expected to do nothing. Johnny, for his part, has no particular hankering for the job in finance that both Julia and his prospective father-in-law envision for him. He'd prefer to enjoy his leisure time now, rather than at the end of a lucrative but unfulfilling career.

Linda takes an immediate shine to the plucky, easy-going Johnny, and the feeling is reciprocated. In their first substantial encounter, Linda hands Johnny her partially eaten apple. He gamely chomps into it then holds onto it for the rest of the scene. If you haven't figured already out that Linda is the Seton sister Johnny will wind up with, congratulations on watching your first movie.

Director George Cukor was one of Hepburn's earliest champions, and his confidence in his atypical leading lady remained unshaken even after she endured a string of box office disappointments in the mid-1930s (“Holiday” would be another). And having already directed them together in “Sylvia Scarlett” (1935), Cukor knew how well Hepburn and Cary Grant, still perfecting his bumbling but somehow still suave heartthrob persona, worked together on screen.

“Holiday” is a romantic comedy that opts more for congenial playfulness than over-the-top screwball hijinks or rapid-fire repartee. Grant, an accomplished acrobat, turns the occasional somersault or rides a tricycle to demonstrate that he's still a kid at heart. Linda helps to stage an impromptu Punch and Judy show in a quiet upstairs room which serves as a sanctuary for her and her friends while the social climbers hobnob down below at the snooty engagement party her father has planned for proper society.

Cukor realized the Hepburn-Grant pairing was the film's central draw, so the film places them together as much as possible, just quietly enjoying each other's company and letting affinity blossom naturally into love. Perhaps this makes “Holiday” more of a hang-out movie than a typical romantic comedy, and that works just fine. 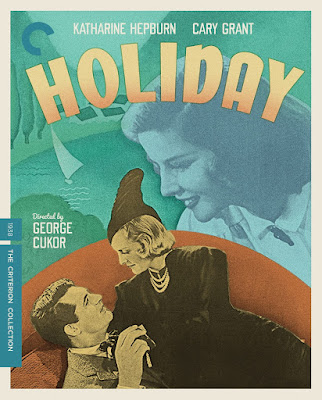 Video:
The film is presented in its original 1.37:1 aspect ratio. This new 4K digital restoration from Sony Pictures Entertainment was created “from a 35 mm nitrate duplicate negative and a 35 mm nitrate print, both preserved by the UCLA Film & Television Archive.” The high-def transfer has a very thick grainy look, a delightful reminder of a thing that was once called “film.” Black-and-white contrast is strong and there's no damage evident.

Extras:
Cukor's version was not the first film adaptation of “Holiday”. Criterion has included the 1930 film (91 min.), directed by Edward H. Griffith. It stars Ann Harding as Linda, Mary Astor as Julia, and Robert Ames as Johnny. I haven't had a chance to watch it yet, except to sample the video quality which looks fairly clean but also rather washed-out.

The disc includes a new interview (34 min.) with film critic Michael Sragow and filmmaker Michael Schlesinger in which they offer some background about “Holiday” as a play and in its film forms.

We also get audio excerpts (21 min.) of George Cukor speaking for an oral history recorded for AfI in 1971 and 1972 and conducted by author Gavin Lambert.

The final extra on the disc is a Costume Gallery, which consists of sketches by costume designer Kalloch, paired with stills from the film.

Final Thoughts:
“Holiday” wasn't a commercial hit and has often been overshadowed by the more celebrated Cukor-Hepburn-Grant vehicle, “The Philadelphia Story” (1940). It's rather low-key by romantic comedy standards, less concerned with plot and more with simply letting audiences enjoy Hepburn and Grant's easy chemistry.
Posted by Christopher Long at 8:38 PM