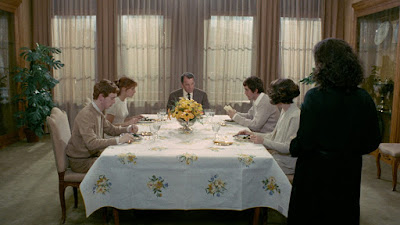 
As in many of the greatest works of speculative fiction such as “Jeffty Is Five,” “The Exterminating Angel,” and “Groundhog Day,” the uncanny premise of Pier Paolo Pasoilin's “Teorema” (“Theorem”, 1968) is neither explained nor justified in any logical fashion. It's just assumed to be a reality in the story.

A telegram is delivered to the patriarch (Massimo Girotti) of an upper-class family in Milan announcing “Arriving Tomorrow”, and so The Guest (Terence Stamp) arrives the next day. The Guest then immediately begins disrupting the household's fragile status quo simply because that's what the film's “theorem” posits he would do.

Emilia (Laura Betti), the family maid, ogles The Guest while he lounges about at full manspread. He reads Rimbaud, book cradled at crotch level (Stamp's “power angle” features prominently in the film), and Emilia is driven into a frenzy by his Rimboner. She flits frantically about the palatial estate, failing in her assigned chores, then races into the kitchen to asphyxiate herself at the stove. The Guest intuits what she's doing and rushes to save her, or perhaps he wants to preserve her for future torment. We don't know enough to guess which, and we never will. In either case, he makes love to her instead.

Rarely speaking, but always piercing the soul with his sky-blue-eyes, The Guest systematically seduces each member of the household, including the factory-owner husband, wife Lucia (Silvana Mangano), daughter Odetta (Anne Wiazemsky), and son Pietro (Andres Jose Cruz Soublette). Surprisingly, Pasolini leaves a lot to the imagination, and the film's scandalous reputation (it was banned in Italy) derives from its basic premise rather than its graphic content. After securing his conquests, the Guest then abruptly departs, leaving the second half of the film to follow each of the characters as they descend into madness, now left rudderless in a world without their beloved stranger.

Is he devil or angel? Pasolini coyly described The Guest as just “a boy” but also referred to his arrival as, in effect, the traumatic injection of authenticity into the shallow lives of the sheltered bourgeois family. Ejected from the Eden of their blissful ignorance, they struggle to make meaning out of their lives now that they have knowledge of real pleasure. Odetta begins measuring the lawn with a tape ruler. Pietro starts painting increasingly deranged abstract art, a project that includes pissing on a canvas (sorry, Andy, you weren't the first). I'll let you discover what happens to Emilia on your own.

The film jumps around in time, though that's not clear until near the end, and also shifts from a muted palette to a sepia interlude and then to lush color at the party that introduces The Guest. Stamp's blue eyes may be the film's most enduring image and its greatest special effect. The music, composed and selected by Ennio Morricone, also runs the gamut from jarring electric guitar to somber Mozart, most of it working to defamiliarize the domestic setting.

Pasolini's theorem isn't a particularly persuasive one, at least as sociopolitical critique. If it just boils down to Pasolini's claim that “a member of the bourgeoisie, whatever he does, is always wrong” that isn't exactly a testable, rejectable hypothesis. Viewed more as Bible-inflected science-fiction as filtered through a Marxist lens, “Teorema” is quite thought-provoking, in no small part because it resists any pat psychological motivations. “The Book of Job” and “Stranger In A Strange Land” meet up to wrestle with the class struggle, and all that's left to do in the end is to strip naked and scream into the void. Sounds like a blast. Is it any wonder the pope condemened it? 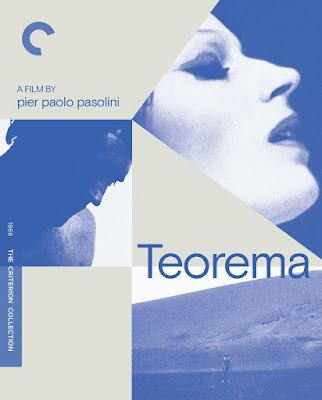 Video:
The film is presented in its original 1.85:1 aspect ratio. “This new digital transfer was created in 4K resolution … from the original 35 mm camera negative at Cinecitta in Rome.” The film shifts color palettes a few times, and this high-def transfer does a good job of capturing its full range of tones. Most of the film is shot with bright colors, and they pop here, especially Stamp's blue eyes. Another strong Criterion transfer, as usual.

Audio:
The linear PCM mono track provides a flat but clear sound. Both dialogue and the Morricone music are cleanly mixed. Listeners can also choose the English dub which isn't as sharp, but still sounds good. Optional English subtitles support the Italian audio.

Extras:
The film is accompanied by a commentary track by Robert C. Gordon author of “Pasolini: Forms of Subjectivity” which was recorded in 2007 and originally included on a BFI release of “Teorema.”

The disc includes a brief introduction (2 min.) which is really a snippet of a 1969 interview with Pasolini in which he describes the film as a “parable” or “enigma” but mostly avoids providing much of an interpretation.

Another feature from the 2007 BFI disc is offered here in the form of a 33-minute interview with Terence Stamp, which is far more substantive than most actor interviews. Stamp discusses his work with Fellini, which first brought him to Italy, and the ways in which he brought his own philosophy to the character of The Guest, something he needed to do since Pasolini was reluctant to tell him much about the character (and also secretly filmed Stamp even while not acting).

We get one brand new feature, an interview (16 min.) with John David Rhodes, author of “Stupendous, Miserable City: Pasolini's Rome.” Rhodes discusses some of Pasolini's influences (Marxism, etc.) and also touches on the film's importance in queer criticism/film history.

The slim fold-out booklet includes a remarkable essay by critic James Quandt, always a must-read on any topic.

Final Thoughts:
Any movie condemned by the pope has to be worth seeing, right?
Posted by Christopher Long at 10:31 AM