In the animated worlds of Czech filmmaker Karel Zeman, submarine-based pirates ride bicycles underwater, church bells chime like piano keys, and a knight's armor can transform in a twinkling into an astronaut's spacesuit complete with jetpack. Being swallowed whole by a giant whale merely provides the opportunity to meet new friends already inside. Zeman's vision captures the wide-eyed wonder of childhood imagination where all possibilities are treated as both equally plausible and as equal sources of awe and delight.

Zeman may not be a familiar name to you, but he remains a legend in the world of animation and fantasy, still revered today more than thirty years after his death in 1989. Terry Gilliam cites him as a major influence, and not just because they both made films about Baron Munchausen. Koji Yamamura, Tim Burton – the list of Zeman fans is long, yet nobody has ever made a film quite like the works of this pioneer and genuine original.

Zeman, who began directing animated shorts in the 1940s, combined live action with an array of animation/illustration techniques ranging from matte painting to stop-motion, paper cutouts, and a host of other devices. Action is often depicted on multiple planes with real actors in the foreground looking at hand-drawn vistas in the background, and then stepping right into them, new details being revealed the closer we get.

The director's earliest love was puppets and he uses them liberally in his work, both shot as full-scale models and as animated miniatures. This is showcased to great effect in the first film in this Criterion set, “Journey to the Beginning of Time” (1955), in which a group of adventurous boys encounter wooly mammoths, giant rocs, and even witness a groovy stegosaurus battle.

Perhaps the Zeman aesthetic could be summed up as proto-steampunk by way of Jules Verne (Verne's stories provided the loose inspiration for each of the three features in this set), a paradoxically cutting-edge retro style which tweaks antiquated technology into marvels of futuristic engineering. Pedal-powered dirigibles! But his willingness to incorporate a wide variety of effects in many shifting combination makes him difficult to pigeonhole, though I think it's fair to describe the feel of every frame of Zeman's animations as meticulously and lovingly hand-crafted.

The films in this set emphasize the creation of fantastical worlds populated with nifty gadgets and transportation devices, maritime vessels and flying-machines of all stripes. The story-telling is simplistic by design – gosh-wow adventure is the currency of Zeman's realm - and characterization definitely takes a back seat to the design.

The boys in “Journey to the Beginning of Time” (the only film in the set heavier on live action than animation) exist only as stand-ins for dinosaur-loving kids everywhere, gaping at the brontosaurus foraging in the forest and the pterodactyls swooping overhead as their boat drifts placidly along the river that carries them back through the prehistoric eras. Even the colorful title character of “The Fabulous Baron Munchausen” (1962) is little more than a blowhard fabulist with a cool beard, but this isn't a shortcoming. What character could compete with the spectacle of the caldera of an extinct volcano that serves as the hideout for the pirate villains in “Invention For Destruction” (1958)? The smoke coming from the volcano actually belches from the factories hidden inside! Now that's cool.

Sound plays a crucial role in Zeman's work too, which I guess is an obvious statement to make about most animation. The music of composer Zdenek Liska is often foregrounded in both “Invention” and “Munchausen” with the swordfights and horseback chases assuming a symphonic quality.

Zeman was no fringe figure beloved only by cultists. “Invention For Destruction” not only won attention on the festival circuit, it played internationally (opening in English-language markets as “The Fabulous World of Jules Verne”) and, by some counts, remains the top-grossing Czech film of all-time. “Baron Munchausen” was also a hit. Remaining largely apolitical, Zeman was able to continue working through multiple regime changes in Czechoslovakia, though his output would be severely curtailed after the crackdown following the Prague Spring in 1968, also coinciding with a time when he felt new developments in special effects rendered some of his own techniques less potent.

“Journey” is pitched primarily at kids, with their down-river trip through time functioning like a museum tour, with educational interludes along the way. “Invention” and “Munchausen” appeal to kids of all ages, and their elaborate animated worlds continue to amaze more than half a century later. Could any rational person argue that the average CGI-laden blockbuster today can compete with these hand-crafted marvels? 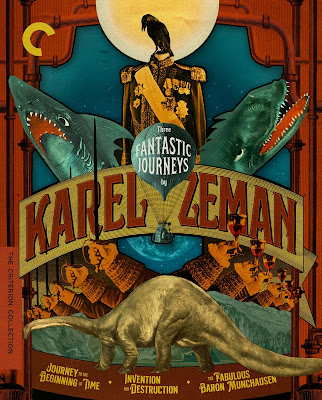 Video:
All three features in the set are presented in their original 1.37:1 aspect ratios.

The Karel Zeman Museum was founded in Prague in 2012, and has worked in cooperation with the Czech Film Foundation to digitally restore many of Zeman's films. The 4K restorations were created from the original 35 mm negatives, though a duplicate positive of “Journey to the Beginning of Time” was used to replace some damaged scenes.

The high-def transfers are strong throughout, even preserving the fine hatchwork that marks many scenes in “Invention” and “Munchausen.”

Extras:
Criterion has provided an affectionate tribute to Zeman's work with this three-film box set, beginning with the unique design of the case for the film. Inside a typical cardboard outer-casing, the three discs in this set are tucked into an interior case which opens out with 3-D pop-up art, featuring mammoths and hot-air balloons and cannons. Be careful when you open it, you'll want to preserve this one.

Each of the three feature films in the set is housed on a separate Blu-ray disc, each of which has its own selection of features.

Sprinkled across all three discs are a series of short Museum Documentaries (most ranging from 2-6 minutes), all produced by the Karel Zeman Museum. They're all short informational features, some about the filmmaker, some about the making of each film, or the effects, the restoration, etc. There are 4-6 Museum Documentaries on each of the three discs.

The “Journey To The Beginning Of Time” disc also includes the 1960 U.S. release of the film, in which the four Czech boys are converted into Americans by way of a newly-short framing device set in New York and the dubious miracle of dubbing. The body of the film remains mostly intact, save for the dubbing. The disc also includes a Trailer (2 min.) and an interview (12 min.) with animation filmmaker John Stevenson.

On the “Invention For Destruction” disc, we get an Alternate Opening for the U.S. release which features... Hugh Downs (huh?) lecturing on Jules Verne and speaking of the wonders of “Mystimation” viewers are about to see. The disc also offers “Making Magic” (23 min.), a 2019 interview with special-effects artists Phil Tippett and Jim Aupperle. I enjoyed this interview, though it feels like half of it consists mostly of them gushing about Zeman and only getting to the analysis of his techniques at the end. We also get a Trailer (1 min.)

The “Invention” disc also provides four short animated films by Zeman: “A Christmas Dream” (1945, 11 min.), “A Horseshoe For Luck” (1946, 4 min.), “Inspiration” (1947, 11 min.), and “King Lavra” (1950, 30 min.) They're all lovely, but “Inspiration” is the real standout. Dedicated to Czech glassmakers, it takes on the challenge of animating glass figurines, all presented as microbial life in a droplet of rainwater. It's just gorgeous.

The disc for “The Fabulous Baron Munchausen” provides the heftiest extra in the set, the 101-minute documentary “Film Adventurer Karel Zeman” (2015). Including interviews with the filmmaker's daughter Lyudmilla Zeman, filmmakers Terry Gilliam, Koji Yamamura, and others, it covers the director's career from his days in advertising to his more challenging final years. The disc also includes a Trailer (2 min.) and a brief promo for the Karel Zeman Museum (1 min.)

Final Thoughts:
The most playful and inventive of Karel Zeman's films play out like the kind of dreams you used to have with your eyes wide open. Maybe you still have those dreams. Zeman held on to them for most of his career and realized them in a groundbreaking style that has influenced many. Criterion's set includes three of Zeman's best-loved feature films, several shorts, and a host of extras, all wrapped up in a slick design with pop-up art. This is a must-own for any animation fan.
Posted by Christopher Long at 3:55 PM