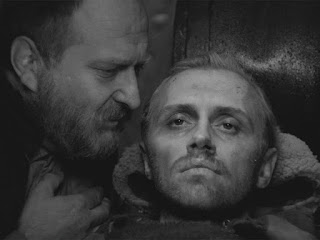 Larisa Shepitko scored fame and success early in her career, first as a prize-winning student at Moscow's film school (where she was a disciple of the legendary director Alexander Dovzhenko), then with the film “Wings” (1967), released when she was just 28. In the film, an ace jet pilot struggles to find a sense of purpose after the war, finding life as a mother and a schoolteacher less than fulfilling. What's the use of being a war hero if hardly anybody remembers you? “Wings” generated controversy in the Soviet press and also showcased Shepitko's ability to express her characters' spiritual struggles with sensitivity and insight.

In “The Ascent” (1977), adapted from a novella by Vasil Bykov, Shepitko turns her focus to the inner torment of two Soviet partisans in Nazi-occupied Belarus. Tasked with braving the icy winter to scavenge supplies for their beleaguered unit, the contemplative teacher Sotnikov (Boris Plotnikov) and the peasant-class soldier Rybak (Vladimir Gostyukhin) are quite obviously doomed from the start, and the story centers on the very different ways in which they choose to face their inevitable fate.

“The Ascent” outchills “McCabe and Mrs. Miller” as perhaps the snowiest film ever made, with vast snowy landscapes blinding both its characters and the viewer in stark black-and-white. In a virtuoso sequence, our two protagonists face off against a group of Nazis. Shot in the leg, Sotnikov can barely prop himself up in the snow as he fires into the whiteness at a tiny dark figure in the distance. Has he hit somebody? There's no way to tell. For a moment the battle appears to be over, but another return volley rings out. He fires again at a hazy silhouette, ready to die rather than be captured by the Huns. Rybak, not as eager to embrace martyrdom, flees through the woods at a gruelingly slow pace as he can only trudge through knee-deep snow, but eventually returns to drag his wounded friend away from the fight.

The bulk of the first half of the film pits Sotnikov and Rybak against the implacable elements, but they face even more remorseless foes once the action moves indoors. Along with a hapless mother (Lyudmila Polyakova, in a breakout role) who tried to provide them refuge, they are arrested, interrogated, and taunted with their impending “liquidation.” Faced with torture, Sotnikov and Rybak, previously colleagues united against a common foe, respond very differently.

This was the crux of the “neo-parable” for Shepitko, the trying of men's souls in the ultimate crucible. It's easy to speak of selflessness, but idealism can be burned away by the sting of a hot poker on vulnerable flesh. Who will protect his fellow soldiers and who will save his own ass? The film's gallery of tight close-ups of faces both old and young, some crusted in ice, some wracked with pain, others contemplating eternity, pull us ever closer to these internal landscapes, the chilliest regions of all, and the spaces Shepitko is most interested in exploring.

The grim final act is drawn out to an almost unbearable length, made all the more grueling as viewers can't possibly be deluded enough to expect a happy ending or a last-minute cavalry rescue. Even the most heroic character may not be able to maintain his resolve as he is forced to take one step after another through crusted snow to the gallows.

"The Ascent” was hailed as Shepitko's greatest achievement to date and won the Golden Bear at the 1977 Berlin Film Festival. In 1979, Shepitko, aged 41, died in a car accident along with several of her crew members during production of a film that would later be completed and release by her husband, director Elem Klimov. 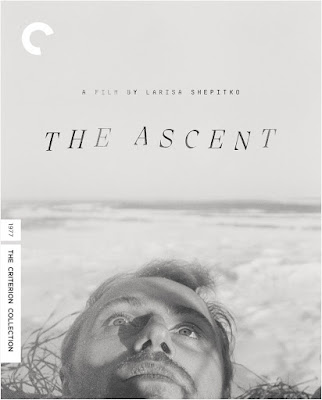 “The Ascent” was originally released in 2008 by Criterion in their old no-frills Eclipse line as part of a two-disc set along with Shepitko's “Wings.” The old DVD transfer was fairly strong, but this new 1080p transfer, “created in 4K resolution from the 35 mm original camera negative and restored by Mosfilm,” represents a substantial improvement. Presented in its original 1.37:1 aspect ratio, this high-def transfer provides the sharp black-and-white contrast needed to see detail in the many washed-out snowy scenes. The extra detail visible in the numerous closeups is a major improvement as well.

The film is presented with a LPCM mono audio track. The sounds of wind whipping, of gunshots ringing out, of feet crunching through thick snow are isolated quite clearly on this crisp audio mix. The score by Alfred Schnittke gets a strong presentation as well. Optional English subtitles support the Russian audio.

The old Eclipse release had no features. By contrast, Criterion has packed this new Blu-ray release with a vast array of extras.

Criterion hasn't provided many commentary tracks in the past few years. For this release, they've included a selected-scene commentary by film scholar Daniel Bird. The commentary covers eight scenes and runs about 33 minutes, with a focus on comparing film scenes to the original Bykov novella, along with other topics.

An Introduction (17 min.) by Anton Klimov, son of Shepitko and Elem Klimov, discusses his parents' artistic collaboration and touches on some of the challenges Shepitko faced from Soviet censors concerned that her film bordered on being a Christian parable.

Lyudmila Polyakova's interview (2020, 22 min.) allows the actress a chance to talk about her somewhat unlikely path to an acting career – even when young, she was quite tall and stocky and even her family doubted she had a future on stage. She also expresses her great fondness for Shepitko, who became a friend as well as her director.

Criterion has included “The Homeland of Electricity” (1967, 39 min.), a short film Shepitko directed as part of the omnibus film “Beginnings of an Unknown Era.” It was shelved by Soviet censors and not released until 1987, after much promotion by her husband.

If there's a specific theme in the features included on this disc, it's an emphasis on the love between Shepitko and Klimov. “Larisa” (20 min.) is a short documentary by Klimov, featuring footage of his wife and closing with the last images she filmed before the accident that killed her. It's quite moving. “More Than Love” (39 min.) is a documentary that aired on Russian TV in 2012, and highlights the personal and working relationship between Shepitko and Klimov.

“A Talk With Larisa” (52) aired on Russian TV in 1999. It begins with an introduction by Elem Klimov then shows a lengthy 1978 interview of Shepitko conducted by the German critic Felicia von Nostitz. Shepitko had won at Berlin the year before for “The Ascent” and was invited back to Berlin in 1978 to serve on the jury – this interview occurred during the festival.

The final extra is “Islands” (2012, 40 min.), another documentary which aired on Russian TV in 2012, and includes interviews with Shepitko's sister, son, and other friends and colleagues.

I miss the old Eclipse line with its modest packaging and bare bones releases of previously hard-to-find films (at least in North America), but Criterion's Blu-ray upgrade provides not only a newly restored high-def transfer, but a passel of extras that put Shepitko's tragically short career into better context. Perhaps Criterion can give the same treatment to “Wings” in the near future.

Posted by Christopher Long at 7:55 AM