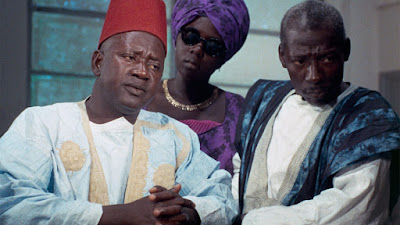 Senegalese director Ousmane Sembene's first feature, “Black Girl” (1966), may not have instantly earned him the title of “father of African cinema” that now defines the author and filmmaker's legacy, but its international success enabled him to assume greater control over his work. Sembene could only secure funding for “Black Girl” by filming in French, the colonial language in which he also wrote his earliest novels, but he was able to shoot his next feature, “Mandabi” (1968), in Wolof, making it the first West African film shot in an African language. This was crucial for an artist who wanted to speak directly to Africans. As Sembene once said, “Africa is my audience; the West and all the rest are just markets.”

Adapted from Sembene's own short story, the title “Mandabi” refers to a money order that arrives unexpectedly in a working-class section of Dakar, Senegal. A young man working as a street sweeper in Paris has sent the money back home to his uncle, Ibrahima Dieng (Makuredia Guey), for safekeeping and to help pay the bills. This windfall would seem to be a godsend for the unemployed Dieng and his two hard-working wives, Mety (Yunus Ndiay) and Aram (Isseu Niang) but in Sembene's tale misery soon follows, albeit by an often-comedic route.

To cash the money order, Dieng must first scrounge up enough change for the bus ride to the downtown post office. There the illiterate Dieng needs to pay a man (played by Sembene) to read him the letter accompanying the money order. The postal clerk then informs Dieng he can't cash the money order without a birth certificate. For which he'll have to pay for a photograph – a nearby photographer is eager to take his money, less willing to deliver the actual picture. Every neighbor and relative holds a hand out too, each with a story of legitimate need. Each step demands a piece of flesh, which eventually leaves nothing behind but a skeleton picked clean.

While much of the cast was non-professional, Guey was an accomplished stage actor and his physical performance is a source of both the film's humor and its tragedy. After a healthy repast served dutifully by his wives, Dieng belches his satisfaction and can barely drag his portly body into bed to sleep it off. He constantly fidgets, running his hand over his bald head or picking at his brilliantly colored clothing while he wanders the city on his doomed quest to complete what should be the simplest of tasks. By the end, his head droops under the weight of a bureaucracy designed to crush him, even nearly a decade after Senegalese independence.

All is not lost, though. Just as “Black Girl” ended with the promise of revolution in the form of a boy wearing a traditional African mask, so “Mandabi” climaxes with a cry for activism. Reminiscent of Charlie Chaplin's direct address to the audience in “The Great Dictator,” the postman who originally brought the cursed money order into Dieng's life exhorts the harried man and his wives to change the country themselves, not to wait for someone else to do it. Rise up! Sembene always had sympathy for his oppressed protagonists, but sometimes also expressed frustration with their passivity.

“Mandabi” was Sembene's first color film, and the contrast between the dazzling multi-hued clothing of the proletarian characters with the plain monochromatic suits of the bureaucratic predators is quite striking. Sembene may have emphasized the political over the aesthetic, but “Mandabi” showcases the vitality of life in the working-class neighborhood, from our hero's first hearty burp to the stylish tailoring of both the men and women.

These lives and these places were seldom represented on film before Sembene, certainly not so vibrantly or with such an eye for detail. As Sembene said, “If Africans do not tell their own stories, Africa will soon disappear.” “Mandabi” is a tale told by an African about Africans in their own language, marking it as another major development both in Sembene's singular career and for all of world cinema. 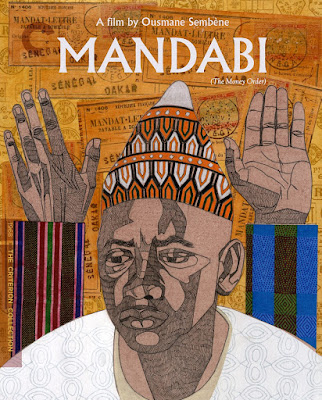 The film is presented in its original 1.66:1 aspect ratio. From the Criterion booklet: “This 4k digital restoration was undertaken by STUDIOCANAL at VDM... from a 35 mm interpositive.” The color palette is bright with blues and reds that pop off the screen. Image detail is sharp and looks great both with close-ups of faces and in longer shots of downtown Dakar.

The film is presented with an LPCM mono audio mix. The percussion-heavy musical score sounds great and there's no evidence of distortion from this remastered audio. Optional English subtitles support the Wolof dialogue.

Criterion has included several supplemental features with this Blu-ray release.

Film scholar Aboubakar Sanogo provides an introduction (30 min.) covering a range of topics concerning the film's background as well as relevant political and social context . This touches on Sembene's political beliefs, details about the film's production, and an array of other topics.

A conversation (19 min.) between author Boubacar Boris Diop and feminist activist Marie Angelique Savane gives the perspective of people who lived through political upheaval in Senegal in the 1960s, helping to provide more context for the significance of the release of “Mandabi.” As Savane says, “For the first time, a movie was speaking to us directly.”

Criterion has also included “Taux” (1970, 27 min.), a short film by Sembene, adapted from his own short story. Related to “Mandabi,” it tells of a young Senegalese man's struggle to find a job, including having to pay for a ticket just for the privilege of entering the workplace. It doesn't have the satirical bent of “Mandabi” focusing primarily on the outrages the characters must endure.

The slim fold-out booklet includes an essay by scholar Tiana Reid as well an excerpt from a 1969 interview of Sembene conducted by film critic Guy Hennebelle.

And perhaps the best extra of all is Criterion's inclusion of a separate booklet which reprints Sembene's short story from which he adapted the film “Mandabi.” Translated from the French by Clive Wake, the story runs just over 60 pages in this format.

With a strong high-def transfer and several extras, this release does justice to one of Sembene's major works. “Mandabi” becomes the second Sembene film in The Criterion Collection. Djibril Diop Mambety's “Touki Bouki” (1973) will also be getting a stand-alone Criterion release next month. Here's hoping this is the start of many African films set to join the collection.

Posted by Christopher Long at 10:34 AM