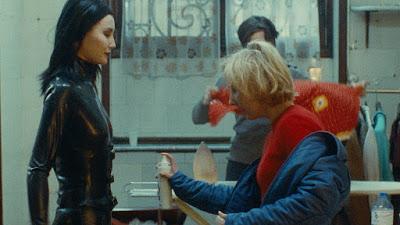 I remember first watching “Irma Vep” (1996) in film school. Like many viewers, I was baffled by the film's enigmatic ending and couldn't get those final scratchy, assaulting images out of my mind for weeks. While struggling, like any earnest film studies scholar, to interpret their meaning, I failed, like any earnest film studies scholar, to notice the film's most obvious quality: It's a total hoot!

In his vertiginous portrait of the joys, terrors, chaos, jealousy, and inspiration that form the short-lived desert-bloom culture of a film set, writer-director Olivier Assayas has plenty to say about the perilous yet exciting state of French cinema as it celebrates its centennial and warily eyeballs a new millennium. But whether “Irma Vep” turns out to be a requiem for or a celebration of the seventh art, Assayas and his cast and crew seem determined to have fun along the way.

Actress Maggie Cheung, playing a fictionalized version of herself, arrives on the set of a low-budget French art film in which she will star. She's three days late thanks to her previous project, a big budget Hong Kong action flick that ran over schedule, a reminder that Cheung (both the real one and the film's fictional version) is one of the most famous movie stars in the world, even if some of the members of the tiny, insular French crew are barely aware of her work.

Cheung meets with director Rene Vidal (Nouvelle Vague icon Jean-Pierre Leaud) who has made the bold decision to cast the Hong Kong star in his remake of the Louis Feuillade silent film serial “Les vampires” (1915-16). Cheung will play Irma Vep, the daring criminal thief first portrayed by Musidora, an actress hailed at the time by surrealist poets as the very definition of the modern, liberated French woman and who was crowned Paris's Queen of Cinema in 1926. Why cast Maggie Cheung as this most definitively French of French icons? Vidal attributes his choice to Cheung's “grace” and her “mysterious” persona. In other words, he's turned on by her.

Libido is one of the primary engines of creativity, and Cheung's presence on set fuels a great deal of creativity. Costumer designer Zoe (Nathalie Richard), tasked with repairing the slinky but flimsy latex catsuit into which Cheung is poured, both befriends and lusts after the actress. Some crew members gossip about Cheung's alleged sexual exploits while others pigeonhole her in xenophobic fashion as “the Chinese girl.” Cheung, for her part, integrates herself into the film set's culture while retaining a bemused detachment, something necessary to carve out her own identity while being fetishized by her co-workers in this strange, new land.

Assayas served time as a critic before directing his own films, and he's keenly aware that everyone holds their own loopy view of what makes a movie great. A hyperbolic interviewer (Antoine Basler) browbeats Cheung with his unbridled enthusiasm for John Woo (ah, the “ballet” of violence!) and his devotion to Arnold Schwarzenegger and Jean-Claude Van Damme, true artists who make movies for real people, not the pallid arthouse fare served up by intellectuals for intellectuals. Conversely, two former militant leftist filmmakers screen their old agitprop movie at a late-night cast party, but to minimal enthusiasm. For an on-set accountant (Alex Descas), what matters most is that the film can be projected to amortize at seven percent – now that's a great movie!

Rene, described at one point as a director who “used to be very good,” experiences a violent breakdown and gets replaced on the project as it rapidly spirals out of control. But just when all seems lost, we see the short bit of film that Rene had a chance to edit before his ouster. The grainy black-and-white footage, with its visual and audio scratches, and crude animation seemingly drawn right onto the film, could be seen as evidence of the director's mental turmoil, or perhaps as the promise of a whole new direction in cinema, a merging of the experimental (those two leftists at the party) and the mainstream (John Woo's “ballet”) that has always defined the medium. Perhaps you can still be a radical after all, even after a hundred years of filmmaking and the need to coordinate budgets with a half-dozen international production companies. No wonder Assayas describes “Irma Vep” as his film that has the happiest ending. Of course “Irma Vep” only pulled in a few hundred thousand at the box office on a $1.4 million budget so, y'know, there won't be a sequel. 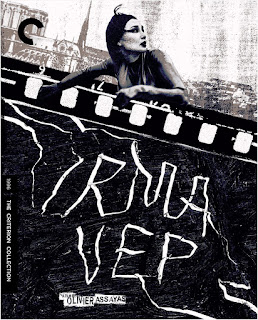 The film is presented in its original 1.66:1 aspect ratio. According to Criterion: “This new 2K digital restoration was undertaken from the 16 mm and 35 mm camera negatives.” Most of the film was shot on super 16 and this 1080p restoration preserves the grainy look with sharp detail throughout.

The DTS-HD Master Audio 5.1 surround track provides a sense of depth and handle's the film's eclectic soundtrack quite well. Optional English subtitles support the audio which is in French and English.

Criterion has packed this release so heavily, they've spread the supplements over two Blu-ray discs.

In addition to the film itself, Disc One includes a recent interview (2021, 28 min.) with Assayas. The writer-director discusses the film's genesis, which started as a project with filmmaker Claire Denis. He also discusses how he first met Maggie Cheung (to whom he was married from 1998-2001) at Cannes, then writing and shooting “Irma Vep” rather quickly while he was preparing for a much larger project.

Disc One also includes two older supplements previously included on other discs. First is a conversation (2003, 34 min.) between Assayas and critic Charles Tesson. They discuss their shared passion for Asian film, and a 1984 trip they took to Hong Kong, which turned into a major article in “Cahiers du Cinema.” Second is an interview (2003, 17 min.) with actresses Maggie Cheung and Nathalie Richard regarding their experience on “Irma Vep.”

Disc One also includes thirty minutes of “On the Set” footage from the making of “Irma Vep.”

Disc Two leads off with “Les Vampires: Hypnotic Eyes” (2016, 59 min.), the sixth episode of Louis Feuillade's landmark serial film. I think “Les vampires” is public domain, though I'm not sure how that concept applies in French law, but I know it's not hard to find online. However, this 1080p upgrade of an episode is a pleasure to watch.

The second disc includes perhaps the best supplement in this package, the documentary “Musidora: The Tenth Muse” (2013, 68 min.) Directed by Patrick Cazals, this feature tells the story of the much celebrated French actress who portrayed the sultry Irma Vep, and inflamed the fantasies of a few generations of French film lovers. Musidora (real name Jeanne Roques) was far more than a fetish object. She was one of the first French women to direct films. She also produced and wrote in addition to acting, and hobnobbed with major figures of the time, including her friend Colette. Later, she worked with Henri Langlois and the Cinematheque. This is a fantastic documentary.

In “The State of Cinema 2020” (46 min.), Assayas holds court on what has and hasn't changed in film in the quarter century since he released “Irma Vep.” He has devoted a lot of thought to this and bombards the viewer with his densely-packed arguments, which is fascinating and also might require a few sittings to absorb.

Disc Two wraps up with two short supplements. “Man Yuk: A Portrait of Maggie Cheung” (1997, 5 min.) is a short directed by Assayas, which sort of picks up where those final images of “Irma Vep” left off. We also get 4 minutes of Black-and-White Rushes of Cheung on a rooftop set in her Irma Vep costume.

With “Irma Vep,” Olivier Assayas appears to be asking a few major questions about his career and his medium of choice: “What have I been doing?” and “What can I do next?” The answer to the latter appears to be “just about anything.” “Irma Vep” argues, in part, that boundaries between genres and between high and low art are false. Cinema thrives on the confluence of its many historical crosscurrents, and Assayas's portrait of creativity as a gloriously chaotic mess is intoxicating and downright inspiring. Criterion has loaded this two-disc release with a strong array of extras to support this top-notch high-def transfer.

Posted by Christopher Long at 1:10 PM