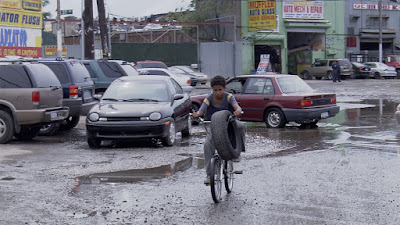 In an early scene in director Ramin Bahrani's “Chop Shop” (2007), twelve-year-old Alejandro (called Ale, and played by non-professional actor Alejandro Polanco) and his friend step onto a New York City train with boxes of candy for sale. Young Ale delivers the passengers a brazen, honest pitch: “Excuse me, ladies and gentlemen, sorry for the interruption. We are not gonna lie to you. We are not here selling no candy for no school basketball team. In fact, I don’t even go to school, and if you want me back in school today, I got candy for you.” There you have the entire film and its protagonist in a nutshell: no nonsense and a whole lot of moxie.

“Chop Shop” takes place in the Willets Point neighborhood of Queens, right in the shadow of Shea Stadium; chants of “Let’s go Mets!” can be heard in the background but they might as well be voices from halfway around the world. Willets Point is its own hermetically-sealed world of garages and body shops where Alejandro busts his ass to scrape out a living among the mechanics (both legit and dubious ones) and the street hustlers. Little Ale gamely flags down drivers who havecruised into the area looking for cheap repairs, guiding them to the shop run by his boss Rob (Rob Sowulski, a real garage owner.) A perpetual motion machine, Ale skips up stairways, races across bridges, and squeezes his tiny body through windows in the relentless pursuit of an extra buck, selling bootleg DVDs, stolen hubcaps, or anything else he can scrounge.

Soon, Ale's teenage sister Isamar (Isamar Gonzalez) arrives from a safe house to live with him in a cramped room above Rob's garage. Without parents, an education, or any kind of social safety net to rely on, the siblings' life seems precarious, but Ale is confident he can surmount any obstacle. He assures Izzy there's nothing to worry about because: “I'm gonna work this shit out.” Even when his faith in the value of all his hard work is sorely tested by jarring revelations that challenge what's left of his youthful naivete, Ale just keeps working shit out.

Like Bahrani's debut feature, “Man Push Cart” (2005), his second film immerses viewers in the working world of marginalized characters, most of whom are persons of color. Likewise, “Chop Shop” is also shot with a hand-held HD camcorder (with Michael Simmonds back as cinematographer) that follows Ale everywhere as he works and sometimes plays in Willets Point. Actor Alejandro Polanco actually worked part-time in Rob Sowulski;s garage for a few months during shooting, and this experience, enhanced by the intimacy of the handheld camerawork, lends the film an authentic feel few filmmakers have ever been able to capture so vividly. Don't mistake it as a pseudo-documentary, however. Bahrani and crew shot dozens of takes for some scenes in pursuit of that convincing illusion.

“Chop Shop” is also a city symphony film. Hundreds of films have been shot in New York City, many of them in Manhattan. Some have focused on other neighborhoods, but Willets Point is a kind of forgotten land, unseen by the hordes of Mets fans congregating right next door at Shea Stadium (at least until Shea was dismantled in 2009). Manhattan is clearly visible across the river, yet plays almost no role in the lives of the denizens of Willets Point. But this neighborhood of cheap side-view mirrors and quickie paint jobs is every bit as much a part of New York as anything “Sex and the City” or Woody Allen have ever depicted.

Alejandro Polanco delivers one of the best performances by a child actor that I've ever seen. Ale is plucky and preternaturally poised but without a hint of precociousness, and Polanco bought into the role completely, going places some adult stars wouldn't dare. In the train scene mentioned above, Polanco went onto a real train and sold candy to real passengers (a few were plants from the cast) who, in typical New York fashion, barely paid any attention to the camera. They just wanted some candy, like Ale just wanted some money. No nonsense. And a whole lot of moxie. What a great movie. 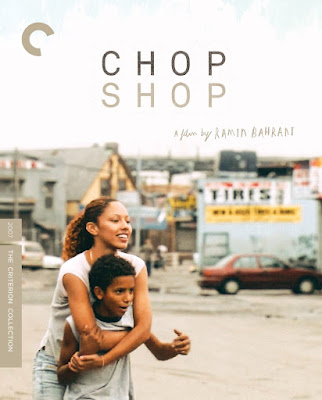 The film is presented in its original 1.78:1 ratio. Like “Man Push Cart” this film was shot on an HD Camcorder, but this high-def transfer looks a bit sharper, especially in motion. Detail is strong, colors are naturalistic. It's a solid improvement from the 2008 DVD released by Koch Lorber with its interlaced transfer, the only other release of this film I've seen.

Criterion is releasing both of Ramin Bahrani's first two feature films this week, “Man Push Cart” being the other. They've included a similar array of supplements for each film.

The film is accompanied by an old 2006 commentary track featuring Bahrani, Polanco, and cinematographer Michael Simmonds. This is listed as a 2006 commentary even though the film was released in 2007.

“In Search of the American Dream” (2020, 27 min.) is a conversation between Bahrani and scholar Suketu Mehta which touches on a variety of topics, including the influences of Ken Loach and neo-realism on Bahrani's work.

“Making Chop Shop” (2020, 22 min.) is a conversation among Bahrani, Polanco (now grown up), actor Ahmad Razvi (the star of “Man Push Cart” who also has a supporting role in “Chop Shop”), and assistant director Nicholas Elliott. Bahrani talks about first meeting Polanco in school as well as other details about production and even about getting to watch the film in Cannes while seated near Abbas Kiarostami. Viewers will probably be most interested in seeing the adult Polanco, now a successful entrepreneur.

Criterion has also included some Rehearsal Footage from the film, two different sequences that run a total of 33 minutes.

We also get a Theatrical Trailer (3 min.)

I'm certain I'm not qualified to determine what the single best American independent film of the 21st century is. I'm equally certain that “Chop Shop” is on the short list of contenders for that honor. I fell in love with it the moment Ale gave his pitch on the train, and I found it every bit as potent on a rewatch 14 years later. Criterion has given this remarkable the quality high-def release it has long deserved.

Posted by Christopher Long at 1:10 PM