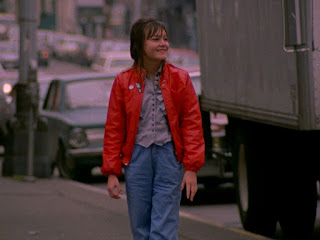 After a decade of economic struggles, Seattle officials were eager to rebrand the Emerald City as one of America's “most livable” locations heading into the '80s. Photographer Mary Ellen Mark and journalist Cheryl McCall were sent by “Life” magazine to the new, more “livable” Seattle and they returned with a devastating story about homeless teens eking out perilous livings on the streets. Their article was published in the July 1983 issue of “Life” by which time Mark had already contacted her husband, director Martin Bell, about featuring the kids in a documentary, a project that turned into “Streetwise” (1984).

“Streetwise” introduces viewers first to the big city and its vibrant waterfront, then to the broad array of teens who spend their days and nights along Pike Street near the Pike Street Market. The boys aggressively panhandle while most of the girls work as prostitutes. All look impossibly young while sounding so very much older than their years. Several girls speak quite matter-of-factly about being beaten and raped – by 14 or 15, such horrors have simply become an expected part of their daily lives. They calmly weigh the merits of various pimps (most of them also teens), sizing up who might offer them the best protection.

The film gradually begins to focus more on a few emergent stars. Rat, a scrawny boy who can't weigh 100 pounds soaking wet, dumpster dives for food and constantly hustles for cash, preferably with a more muscular partner backing him up. Lulu, a tough-as-nails lesbian, declares herself the unofficial protector of Pike Street; she evinces no fear whether dealing with violent homeless men or the police.

If this ensemble documentary has a single lead, it's 14-year-old Erin Blackwell, better known as Tiny. Tiny dreams of being “really rich” and living on a farm with lots of horses, but her current reality sees her spending more time at the free clinic where she worries about getting pregnant or contracting another STD from one of her “dates.” With a wry smile and a quick wit, Tiny appears to be a true survivor, though the threat of abrupt, unavoidable violence hangs over even the most grizzled veteran of the streets.

Unlike many of the other children, Tiny hasn't lost all contact with her parents. Tiny's mother feeds her a meager meal at the cheap diner where she works, marveling at how quickly her daughter has grown up in her new life away from home. Mom is fully aware of how Tiny earns her living, but dismisses the tragic situation as “just a phase,” justifying her inaction (and her preference for booze over parenting.) Tiny's decision to live on the streets has its own logic. Her home situation seems even worse, and the street offers the tantalizing illusion of freedom – new friends, no rules, and more money than mom could ever make.

One of the film's most unforgettable scenes involves another parent-child interaction. Dewayne, a skinny scrapper like Rat, visits his father in prison. Dad tries to scare Dewayne straight with a stern lecture about the right way to live that fails to convince when delivered through the plastic screen that separates them. He promises Dewayne “I'm gonna make it up to you” but neither of them believe he'll get a chance to deliver. The poignant image of the father pressing his hand helplessly against the screen as Dewayne turns his back to leave is difficult to shake off.

In contrast to the hand-held “fly on the wall” style associated with direct cinema, Bell prefers more static compositions, sometimes with the camera mounted on a tripod, producing many patient, beautiful shots of a hectic, ugly reality. This aesthetic approach communicates an air of respect for the film's marginalized characters, though it's fair to ask how anyone could witness this brutal exploitation of children without putting down the camera and intervening. In a 2015 excerpt included in the Criterion booklet, Mary Ellen Mark says that she and Bell offered to bring Tiny home with them in 1983, but that Tiny declined. Could they have done more? Could the social workers or other support figures only briefly glimpsed in the film have done more? Whatever the answer, the tragic fates that awaited so many of the film's characters (one of the girls was murdered by serial killer Gary Ridgway) once again raises doubts about the capacity of documentary to serve as a tool for social change.

If they didn't bring Tiny home with them, Mark and Bell did stay in touch with her over the years, shooting several short films and eventually the feature “Tiny: The Life of Erin Blackwell” (2016) which Bell completed after Mark died in 2015. Now in her forties, Erin is the mother of ten children along with many adorable little dogs. Erin raised some of her children; others became wards of the state at various points. As Erin inherited the problems of her parents, her kids have inherited many of her struggles. Some of them, like Erin, are drug addicts, some in and out of prison or juvie, and some are still wide-eyed, happy little kids. Much of the film consists of Mary Ellen and Erin reminiscing over footage from their earlier films, lending this follow-up project echoes of the “Up” series of documentaries. Whatever her travails, Erin keeps doing what she's best at: keeping on. 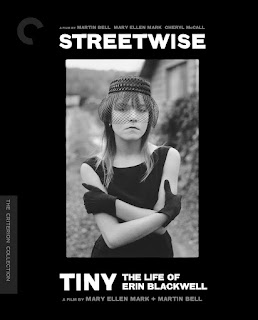 “Streetwise” is presented in a 1.40:1 aspect ratio, pretty close to a fullscreen ratio. “Streetwise” was shot on 16mm film and the 1080p restoration looks grainy as you might expect from the source. This transfer looks fantastic overall with rich detail and a naturalistic color palette.

“Tiny: The Life of Erin Blackwell” is presented in a 1.85:1 aspect ratio. It was shot on digital, but includes a lot of 16mm footage from “Streetwise.” Obviously, image quality varies based on the source, but this is another strong 1080p transfer.

“Streetwise” is presented with a linear PCM mono audio track. “Tiny” gets a DTS-HD Master Audio 5.1 surround track. “Streetwise” features both direct sound and voice-over, as well as some overlapping dialogue and it's all crisply and cleanly mixed here. The film also makes prominent use of a street performance of “Teddy Bears' Picnic” by Baby Gramps and it sounds great here, as do songs by Tom Waits. “Tiny” doesn't make much use of surround channels, but doesn't need to – the audio is clear and distortion-free. Optional SDH English subtitles support the English dialogue in both films.

This single-disc Blu-ray release from Criterion includes two feature films, “Streetwise” and "Tiny: The Life of Erin Blackwell.” Extras are included along with each feature.

“Streetwise” is accompanied by a commentary track by director Martin Bell.

Criterion has also included a new interview (2020, 10 min.) with Bell in which he discusses the film's genesis (from the “Life” article by Mary Ellen Mark and Cheryl McCall) and provides more detail about the production, including the fact that the budget mostly consisted of funding from singer Willie Nelson.

We also get a new interview (2021, 17 min.) with editor Nancy Baker who discusses how she shaped many hours of footage into a narrative. A Trailer (3 min.) is also included.

This includes two other short films about Erin Blackwell's life, “Tiny at 20” (1993, 14 min.) and “Erin” (2005, 23 min.) Much of the footage from these two shorts is shown in “Tiny: The Life of Erin Blackwell.” “Streetwise Revisited: Rat” (14 min.) is a new feature which catches up with Rat, now a husband and a father and owner of a towing company.

“The Amazing Plastic Lady” (1995, 22 min.) is a short documentary. In 1993, Mary Ellen Mark published the book “Indian Circus” about child acrobats in India. This 1995 documentary follows up on that material, largely focusing on Pinky, a 10-year-old girl who can contort her body into a pretzel at will. The film covers both her family and work environment, and shares some clear similarities with “Streetwise.”

The last supplement is a Trailer (2 min.) for “Tiny: The Life of Erin Blackwell.”

The fold-out booklet includes an essay by historian Andrew Hedden, a reprint of the 1983 “Life” magazine article by McCall and Mark (along with some of Mark's magnificent photographs), and a brief excerpt from Mark's book “Tiny: Streetwise Revisited” in which she discusses her relationship with Erin Blackwell.

“Streetwise” was nominated for an Oscar for Best Documentary Feature, losing to “The Times of Harvey Milk.” This two-film Blu-ray release from Criterion and its supplementary features give viewers the sense of the scope of the project that Mark, Bell, and McCall began with “Streetwise” and continued for the next several decades.

Posted by Christopher Long at 8:31 PM