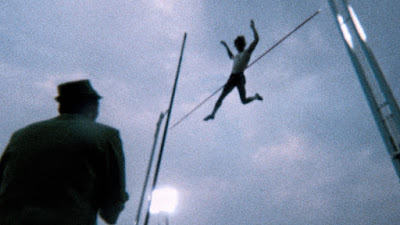 When executive producer David L. Wolper scoured the globe for a dream team of directors to shoot a film about the 1972 Munich Olympics, he didn't worry about whether any of them were actually fans of the games. Swedish director Mai Zetterling states explicitly that “I am not interested in sports” at the start of her segment, but it's clear that most of her colleagues also prioritize aesthetics over athletics.

With eight different “visions” this anthology film reflects a kaleidoscope of interests and perspectives, but a few dominant themes emerge. Zetterling, the only woman hired for the project, trains her cameras on the burliest men at the competition, weightlifters. She is primarily interested in the obsession required to train for such specific feats. What kind of man spends hours every day frog-hopping across a cold gym floor and pumping his body full of eggs and boiled ham all so he press an iron barbell over his head, preferably a bar loaded with 2 more kilograms than anyone else in the world can lift? I dunno – the kinda guy who really likes to lift heavy stuff, I guess.

British director John Schlesinger similarly wonders what would drive a man to spend hundreds of lonely hours running along country roads day after day just to be able to run a single marathon at the Olympics. While Zetterling's obsessive giants can be viewed with a mixture of awe and affectionate bemusement, Schlesinger's segment unearths a darker side to an athlete's monomania. One competitor reads newspaper reports of the murder of 11 Israeli athletes by Black September terrorists, literally just down the road from him in the Olympic Village, and tries his best to block it all out: “I'm here for one thing, and that's to run a marathon.”

Obviously, the murders overshadow everything else about the Munich Olympics, something Wolper could not have foreseen when he initiated the project. The failure to include anything but a fleeting reference to the terrorist attacks until Schlesinger's late segment also overshadows “Visions of Eight” and was the source of much of the controversy surrounding the film's 1973 release, first at the Cannes Film Festival, then to many negative reviews in the states. Perhaps an obsession with art above all other concerns also needed to be examined.

Along with obsession, the film's other dominant theme is failure. French filmmaker Claude Lelouch titled his segment “The Losers” and he provides a moving portrait of athletes at the moment they know their lifelong ambition has been thwarted, at least for now. A losing boxer rages futilely against cold fate in the ring before heading over to his corner for a consoling hug from his trainer. A gimpy wrestler gamely fights on, but has to be helped to the sideline by his opponent. As men and women weep openly, having given it their all and still come up short, the world moves on, leaving them alone and forgotten (except by Lelouch's camera, at least for a few minutes more.)

As Lelouch renders failure sympathetic, American director Arthur Penn transforms it into a thing of beauty. In the film's boldest stylistic segment, Penn composes slow-motion, sometimes blurry images of pole vaulters racing to their destiny. Soaring high and all alone in the universe, one man after another trips that cruelly fragile bar, then freefalls back to earth along with his dreams. When the montage of failed attempts finally morphs into triumphs, with bodies gracefully contorting themselves to just barely clear the bar, the strategic eruptions of applause (the only audible sounds in many shots) accentuate the viewer's euphoria.

In a segment by Japanese filmmaker Kon Ichikawa (director of 1965's “Tokyo Olympiad”), we see a Trinidadian sprinter pull up lame at the start of the 100-meter dash, then we see him do it again and still again. Ichikawa filmed this 10-second race with more than 30 cameras, pointed at each lane, from the sides and above, to document this brief blaze of kinetic energy. He's not just interested in the failure of the one runner, but in the experience of each of them, with slow-motion close-ups on their faces twisted into grimaces of maximum effort. It's a beautiful piece, but far too short.

The net result is indeed a film of remarkable visions, heavier on spectacle than on insight or analysis. Call it a sports film both by and for non-sports fans perhaps. Had it been filmed any other year, it would be easier to celebrate its chronicle of the beauty of bodies in motion, of the potential of human willpower properly harnessed. But it's difficult to think of the Munich Olympics for anything other than tragedy. 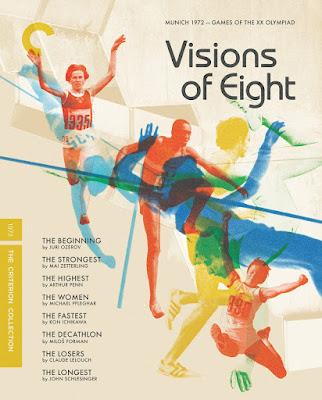 The film is presented in its original 1.85:1 aspect ratio. Criterion included “Visions of Eight” as part of its sprawling “100 Years of Olympic Films” set back in 2017. I don't own that set for comparison. However, this 1080p transfer is sharp throughout, even with some of the extreme slow-motion footage where detail might be harder to preserve accurately. This 4K restoration “from the 35 mm original camera negative” has no obvious flaws.

The linear PCM mono audio track is crisp and provides a strong presentation both of the classical music excerpts and the original score by Henry Mancini. Optional English SDH subtitles support the audio.

The film is accompanied by a commentary track by podcasters Amanda Dobbins, Sean Fennessey, and Chris Ryan of “The Ringer.” To the best of my knowledge, this is the first Criterion commentary done by podcasters. They add a sports savvy that's largely absent from the film itself.

The main extra feature is a new Making Of documentary (2021, 54 min.). I suspect many fans only sample snippets from lengthy Making Of features, but this one is packed with information about an unusual and complex production. Claude Lelouch is the only director who worked on “Visions” who is still alive and he is featured here along with historian David Clay Large and the sons of both David L. Wolper and Arthur Penn. The most interesting aspect of this feature is learning about the other directors Wolper approached. Fellini never agreed to participate, but did allow Wolper to use his name to attract other talent. Senegalese director Ousmane Sembene shot a film about Olympic basketball, but his footage wasn't used for reasons that aren't fully explained. What a huge loss for the project – I'd love to know more.

The only other features are a short promotional film (6 min.) that accompanied the film's 1973 release and a short Trailer (3 min.)

The thick insert booklet includes George Plimpton's 1973 “Sports Illustrated” review of the film, an excerpt from David L. Wolper's 2003 memoir “Producer,” and an essay about the film by novelist Sam Lipsyte.

In 1972, tragedy eclipsed athletics at the Munich Olympics. In 2020, global tragedy canceled the Olympics for the first time in the post-WW2 era. Here's hoping the 2021 Tokyo Olympics are remembered only for their pageantry and competition.

Posted by Christopher Long at 8:41 PM