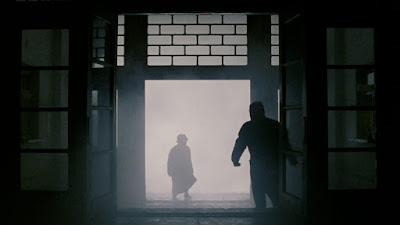 “You died yesterday. I'm sorry for your loss.”

In writer/director/editor Hirokazu Kore-eda's “After Life” (1998), the recently deceased gather to be processed for their impending eternity. You can understand how it might take a little time to adjust. Their way station is a ramshackle office building run by a small staff of functionaries who gently explain the situation to the newcomers. Each arrival has three days to select their most cherished memory – a team will then reconstruct that memory as a short film in which the dearly departed will live forever, shuffling off the rest of their mortal coils.

Like much of the greatest speculative fiction (Octavia E. Butler's “Kindred” springs to mind), “After Life” spends no time explaining or justifying its fantastical premise; it is simply the stipulation around which this film's reality is constructed. The dead souls accept the set-up with few questions as well, though one person asks if everyone gets sent here, both good and bad. A counselor merely nods yes before continuing with business.

Most of the cases proceed routinely; the staff has been handling them for years. Perhaps many, many years; it's hard to judge time here. But a few clients have difficulty choosing a memory. Watanabe (Taketoshi Naito), a company man who died at 70, looks back on his unremarkable career and his unremarkable marriage and struggles to choose a vivid, happy memory he'd want to relive on an endless loop. His dithering causes trouble for his caseworkers, Takashi (Arata) and Shiori (Erika Oda), who try to guide Watanabe through the process while also struggling with their own personal challenges. They wait as Watanabe re-watches his life on a series of low-fi videotapes, one for each year lived.

Perhaps surprisingly, “After Life” hardly deals with theological issues at all. There is little talk of gods or heaven or even who recorded those VHS tapes of Watanabe's life, only pragmatic references to the next place to which all the clients must be sent by the end of the week to clear room for the following week's batch of dead travelers. The job is to keep the line moving as efficiently as possible.

Kore-eda is much more interested in the nature of memory, elusive and protean. When an older woman fondly recalls the beautiful dress she received as a childhood gift, her memory has clearly diverged greatly from the actual lived reality. Had she died ten years earlier or ten years later, that same recollection would have been different still. She has bent, blurred, and buffed that treasured memory over the years to best suit her present, a vast improvement over the more mundane reality. Like everyone, she is a writer, the author of her own history, a work in a constant state of revision. Well, at least until a few days after you die.

Memory can also be a burden. One client is relieved to learn that when he chooses his special moment, he will forget everything else. The rest of his life, it seems, only caused him pain, but once it is forgotten, it can't cause any more suffering. Sometimes memory can be trite. A teenage girl initially chooses to relive the joy of a ride on Splash Mountain at Disney Land, until a weary Shiori explains to her that dozens of other people make the same selection. Maybe she should pick something a little more personal.

Kore-eda honed his craft as a documentarian, and he brings that non-fiction sensibility to his second feature film. He actually interviewed about 500 people, asking them to share their fondest memories, ones they might want to relive in the next life. About half of the clients in “After Life” are played by these interviewees. Much of the film is shot as a series of head-on interviews, where the recently deceased speak at length about their experiences, smiling about happy childhood idylls, bragging about their sexual exploits, or recounting harrowing stories of survival during the war.

Kore-eda credits cinematographer Yutaka Yamazaki, an accomplished documentary camera man, with much of the film's naturalistic design, not just the interviews but the lived-in feel of the run-down office building, and the details of that space seemingly caught on the fly. There is nothing the least bit mystical or even slightly surreal about this unique workplace – just a big waiting room, dormitories, and harried, underpaid staffers rushing to get their cases resolved. Kore-eda also employed a second cinematographer, Masayoshi Sukita, to shoot the reenacted memory-films, which are integrated into the whole by showing “behind-the-scenes” work of the crews trying to find creative solutions on a tight budget. How about cotton balls to recreate the clouds in one pilot's memory of flying?

By remaining so understated in style, “After Life” focuses its attention respectfully on its subjects, both the newly dead clients and the workers who help to ease them through what could otherwise be a traumatic experience. The result is an empathetic and sometimes deeply moving meditation on memory, loss, and perseverance. 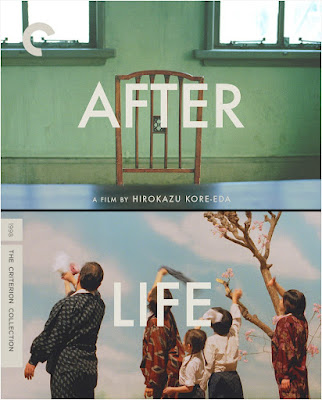 The film is presented in its original 1.66:1 aspect ratio. From Criterion: “Approved by director Hirokazu Kore-eda, this new 2K digital restoration was created by TV Man Union. A new digital transfer was created in 2K resolution on a DFT Scanity film scanner, from a 35 mm duplicate negative made from the Super 16 mm original camera negative, at IMAGICA Lab in Tokyo.”

The high-def transfer of this film, which was shot on Super 16, is grainy and features a muted color palette – the drab building that houses most of the action isn't exactly decorated to impress. Detail is sharp and the naturalistic look of this transfer feels just right for the material.

The film is accompanied by a commentary track by film scholar Linda C. Ehrlich, author of “The Films of Kore-eda Hirokazu.” She covers a broad array of topics, from details about the film's production to an analysis of the film's major themes, including the nature of memory.

Criterion has also included a new interview (19 min.) with Kore-eda, in which he discusses the film's genesis, including how he was at least partly inspired by his childhood experience with his grandfather who suffered from Alzheimer's. He also talks about his early time working in documentary and how that influenced his feature film making.

We also get interviews with each of the film's two cinematographers. Yutaka Yamazaki (19 min.) also talks about how his documentary experience influenced his approach to “After Life,” his first feature film. Masayoshi Sukita (15 min.) provides a bit of a career overview, from his experience as a photographer (including many portraits of David Bowie) to his days covering counterculture movements in both Japan and America.

The final extras are a collection of Deleted Scenes (17 min.) and a Theatrical Trailer (2 min.)

Kore-eda won the Palme d'Or in 2018 for “Shoplifters” and has earned critical praise for numerous other films like “Still Walking” (2008) and “Like Father, Like Son” (2013). He also directed “Air Doll” (2009), proof that you don't have to get it right every time to still be viewed as a modern master. “After Life” was Kore-eda's second feature, following “Maborosi” (1995), and was his first break-out hit. Criterion's Blu-ray release features a sharp high-def transfer and a handful of supplemental features that do justice to this thoughtful, sensitive film.

Posted by Christopher Long at 7:02 PM